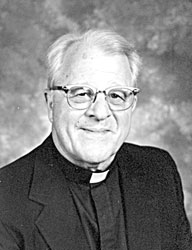 ALTON — Father Robert L. Heintz, a priest of the Diocese of Springfield in Illinois, died March 26 at the Fountains in Godfrey.

He was born on March 6, 1916 in Alton, the son of Charles A. and Mary (Weaver) Heintz. He attended Ss. Peter and Paul School and Marquette High School. He graduated from the University of Notre Dame, and pursued graduate studies at Notre Dame, Fordham and St. Louis Universities before entering the seminary. He was ordained a priest in Springfield on April 17, 1949 by Bishop William O'Connor.

After serving as assistant in Effingham, Paris and Taylorville, Father Heintz served as chaplain of Saint Anthony's Hospital, Alton, 1959-1960. He was appointed pastor of St. Isidore Parish, Bethany, St. Mary, Lovington and Sacred Heart, Dalton City, while directing the Decatur Office of Catholic Charities and serving as chaplain of the Newman Foundation at Milliken University. In 1967 he was named pastor of Holy Ghost Parish, Jerseyville, and St. Mary, Fieldon. In 1976 he was appointed pastor of St. Anthony of Padua Parish, Effingham and was named dean of the Effingham Deanery. From 1984 to 1987 he served as pastor of Sacred Heart Parish in Granite City. He then retired from administrative work to serve in supply ministry in area parishes. Father Heintz filled leadership roles on the diocesan level as a member of the Board of Consulters and of the Diocesan School Board, as a longtime member of the Presbyteral Council, as a member of the Priest Personnel Board and the diocesan newspaper board.

In addition to his parents, Father Heintz was preceded in death by four brothers and sisters-in-law, Charles and Mary Heintz, Frank and Velma Heintz, John and Betty Heintz, Victor and Audrey Heintz; two sisters and a brother-in-law, Mary (Heintz) and Antone Kremer and Katherine (Heintz) Kruegel; two nieces and two nephews.

Memorials may be made to Masses or Ss. Peter and Paul Catholic Church in Alton.