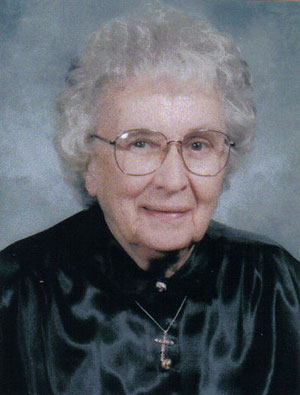 ALTON - Sister Cecilia Jansen, 87, a Sister of Divine Providence, died May 22 at Saint Clare's Villa in Alton. Sister Cecilia taught in Catholic schools in Missouri and Illinois for more than 60 years. When she retired from full-time teaching, she continued to serve Sacred Heart Parish in Sedalia, Mo., as a parish minister and part-time religion instructor.

Sister Cecilia was born Irma Jansen on March 2, 1921, in Bonnots Mill, Mo., to Raphael and Cecilia Jansen. She entered the Sisters of Divine Providence in St. Louis in 1940 and took her final vows in 1946. She earned both her bachelor's degree in history and master's degree in education from Saint Louis University.

In 2005 she celebrated her 65th Jubilee with the Divine Providence community.

She began her teaching career at St. Andrew School in Tipton, Mo., where she later served as the school principal for eight years. She also taught in Missouri at Mount Providence School in Normandy, St. John School in Imperial, and Sacred Heart School in Sedalia, where in her last teaching assignment she was honored as Teacher of the Year in 2004.

Sister Cecilia is survived by her brothers Albert Jansen and Leonard Jansen. She was preceded in death by her parents and another brother.

Visitation was May 26 at Staten-Fine Funeral Home in Alton, and a memorial Mass for Sister Cecilia was celebrated at St. Mary's Catholic Church, Alton, on May 27.

Memorials can be made to the Sisters of Divine Providence, in care of the Development Office, Providence Center, 3415 Bridgeland Drive, Bridgeton, MO 63044-2604.