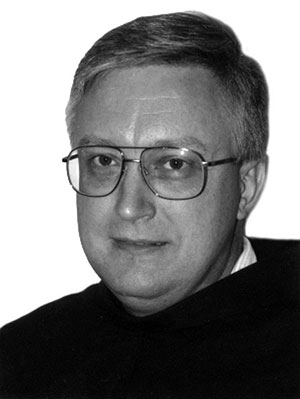 Father James Edmiston, OFM, of the Franciscan Province of the Sacred Heart, died suddenly on May 18 at Mount St. Sepulchre Monastery in Washington, D.C., age 53.

In his professional career Father Jim was a biologist; his specialization was entomology. He taught at Padua High School in Parma, Ohio, from 1983 to 1984; did graduate studies at Kent State University in Ohio from 1985 to 1989; served as president of Padua High School for five years (1989-94); and then between 1994 and 1996 spent the fall semester teaching biology at Quincy University while attending Catholic Theological Union (CTU) in Chicago for the winter and spring quarters. For another year he was a full-time theology student at CTU while living at Holy Spirit Friary in Chicago. He was ordained a deacon in 1997 and returned to Quincy University as assistant professor of biology and fulfilled his diaconate internship. After priestly ordination he continued to teach at QU until 2001.

In September 2001 Father Jim was a missionary for the order's "Russia Project" and he spent seven years in Russia. After his missionary experience in Russia, he returned to the United States earlier this year to do research at the Smithsonian Institute in Washington, D.C. He was living with the Holy Land friars at the Mt. St. Sepulchre Friary near Catholic University.

The funeral Mass was held May 22 at Mount St. Sepulchre Monastery in Washington, D.C. Burial was in the friar's cemetery.