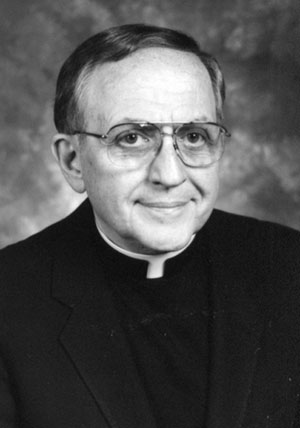 Father Houran served as pastor at St. Matthew, Alton, 1979-1980; St. Raymond, Raymond, 1980-1988; St. Cecilia, Glen Carbon, 1988-1991. He was chaplain at St. Vincent Hospital, Taylorville, 1991-1992. After a sabbatical at Hanley-Hazelden, West Palm Beach, Fla., in 1992, he was parochial administrator at St. Elizabeth, Marine, St. Gertrude, Grantfork, St. James, St. Jacob, 1992-1993. He retired from diocesan ministry in 1993. He received the first Governors' Award from Episcopal Board of Governors of the Pontifical North American College, presented by Cardinal James Hickey, chairman, June 25, 1996. In Florida, he continued helping in retirement at St. Anthony Parish and Blessed Sacrament Parish. He was chaplain at Holy Cross Hospital, served in Catholic Charities HIV/AIDS Ministry and on the Archdiocese of Miami Catholic Charities Board of Directors, Broward County Catholic Charities Board of Directors and Fund Raising Board, Catholic Charities Services HIV/AIDS Board and Substance Abuse Board for Archdiocese of Miami. He was recipient of the Catholic Charities (Broward) Elizabeth Mitchum Volunteer of the Year (1997) Award. He retired as chaplain at Holy Cross Hospital in 2002. In 2004, he was elected to the Fort Lauderdale Beach Kewanis Club Board of Directors.

He is survived by his sister, Mary Anne Behnke of Decatur; two nieces and four nephews.

Visitation will be held Monday, Oct. 8, at the Cathedral of the Immaculate Conception in Springfield until time of the funeral Mass there at 11 a.m., with Bishop George J. Lucas as principal celebrant. Private burial services will be at Calvary Cemetery, Decatur.

Dawson & Wikoff Funeral Home, Decatur, is in charge of arrangements.