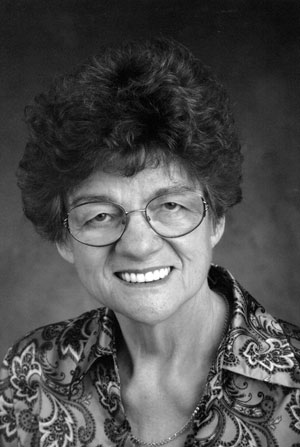 Martina M. Kocher, director of the Villa Maria Catholic Life Center for over 21 years, passed away at 4 a.m. on Tuesday, May 27 at her residence in Springfield, after a brief illness. She was born Martina Maria Luise Gebhardt on Feb. 19, 1940 in Karlsruhe, Germany, the daughter of August and Luise Gebhardt.

Martina moved to the United States when she was an adult and lived in California, before moving to Illinois, where she helped out at her children's school, and was active in her parish church.

She began her work for the Diocese of Springfield in Illinois on Dec. 1, 1986, the year the diocese closed its Seminary of the Immaculate Conception on Lake Springfield, and began its transformation into Villa Maria, a conference and retreat center. Utilizing her degree in home economics with an emphasis in institutional management, Martina helped transform the former seminary buildings and grounds into a welcoming place for spiritual growth and fellowship.

As director, she was responsible for the entire facility, including the grounds, building maintenance and upkeep, scheduling and coordinating meetings, meal planning and preparations, and staff supervision. Her baking skills and love of gardening helped transform the Villa Maria into a much sought-after meeting place for many religious groups and organizations.

Martina worked with the diocesan Office for Marriage and Family Life to begin DASK, Divorce and Separated Koinonia, which offers retreat weekends for divorced and separated people based on the paschal mysteries. She became a Dominican Associate, and was very active in Pax Christi, because of her childhood experience.

She pursued her life‑long love of music, singing in the Prairieland Voices, the Springfield Choral Society, and for many years sang with the Springfield Symphony Chorus.

Martina is survived by her daughter, Anna Nidey, in Jacksonville; three sons, Dan, in Kirkwood, Mo., Chris, in Belleville, and Tim, in Oak Park, three grandsons and two granddaughters.

She has two sisters and a brother in Germany, and a sister in Switzerland, and multiple nieces, nephews, great nieces and great nephews in Germany.

Visitation was to be at Kirlin‑Egan and Butler Funeral Home, Springfield, from 5 to 8 p.m. Friday, May 30, with a prayer service at 6 p.m. The concelebrated funeral Mass was to be held at 10:30 a.m. on Saturday, May 31, at Church of the Little Flower, with Father Robert Spriggs, the principal celebrant.