Kuhn to be ordained in Diocese of Sioux Falls

Deacon Melvin Kuhn, a native of the Diocese of Springfield in Illinois, will be ordained to the priesthood June 6 for the diocese of Sioux Falls, S.D. The ordination will be held at the Cathedral of St. Joseph in Sioux Falls, with Bishop Paul J. Swain presiding. 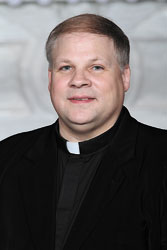 Deacon Kuhn, 48, was born in Quincy, the son of Barbara Ann and the late Thomas Kuhn. He grew up in Mendon and his family belonged to St. Edward the Confessor Parish there. He has five brothers and two sisters, one of whom is Aaron Kuhn, currently a seminarian for the Springfield diocese.

Deacon Kuhn attended Mendon Elementary School and the former St. John the Baptist School in Quincy and then graduated from Quincy Notre Dame High School in 1983.

The newly-ordained father Kuhn will celebrate a Mass of Thanksgiving at 1 p.m. Sunday, June 22, at St. Edward the Confessor Church in Mendon. A reception will follow at 3 p.m. at Quincy Notre Dame High School in Quincy. Family and friends are invited.