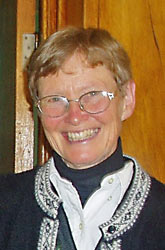 The daughter of Frank and Sidney Cook Moore, she grew up in Redlands, Calif., where she was inspired to join the Springfield Dominicans who were her teachers.

After professing her vows as a consecrated religious in 1962, Sister Marie Dominic taught in parish grade schools in Illinois and in Redlands. In the Springfield diocese, she taught at the high school level at Routt Catholic High School in Jacksonville and at Sacred Heart Academy in Springfield.

For 30 years, Sister Marie Dominic ministered in education, pastoral care and community formation in the country of Peru. She worked in the isolated areas of Lima, Jarpa and Llanopampa, with people largely ignored by the rest of the world. One of her recent joys was to reconnect with her friends in Peru this past March when the Springfield Dominican Sisters celebrated 50 years of presence with the Peruvian people.

Sister Marie Dominic was preceded in death by her parents.

She is survived by her brothers, Roger Moore of Toronto, Canada and Jeffrey (wife Gayle) Moore of San Jose, Calif.; nieces, Amy Moore Sund and Katherine Moore; cousins and many dear friends.

Donations may be made to: Dominican Sisters Retirement Fund, 1237 W. Monroe, Springfield, IL 62704.

Kirlin-Egan & Butler Funeral Home was in charge of arrangements.