On Sept. 28, Habitat for Humanity of Sangamon County officially kicked off construction of its 99th home, in honor of Pope Francis. The blessing and kick-off was held just across the street from the build site of the home, which is on the corner of South Ninth Street and Wellesly Avenue in the Springfield neighborhood known as Harvard Park. 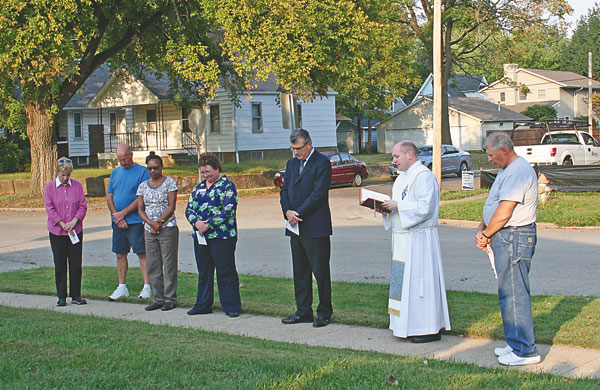 On Sept. 28, Habitat for Humanity of Sangamon County officially kicked off construction of its 99th home, in honor of Pope Francis. The blessing and kick-off was held just across the street from the build site of the home, which is on the corner of South Ninth Street and Wellesly Avenue in the Springfield neighborhood known as Harvard Park.

The "blitz build" for the home is now under way, with volunteers working together Oct. 1-3 and Oct. 8-10, from 8 a.m. until 4 p.m. all days. The 1,200-square-foot, three-bedroom, one-bath house (built on a crawl space) is expected to be completed in late December.

This particular Habitat home is being built thanks to an anonymous person donating $60,000, which is 60 percent of the total home-building cost of $100,000, said Colleen Stone, executive director of the Sangamon County Habitat. "This donor has recognized Pope Francis' work to unify the Catholic Church and has challenged the local Habitat affiliate to provide an opportunity for volunteers to not only work towards a common goal, but to further Habitat's mission of building and preserving homes," she said.

That donor challenged the Catholic and non-Catholic volunteers in Sangamon County to work together toward a common goal, in honor of the Holy Father, who has stated "Work confers dignity," Stone said. It was a happy coincidence that the blessing of the "Pope Francis home" took place on the heels of the Holy Father's trip to the United States. However, the actual groundwork for the home took place early last winter, she noted. 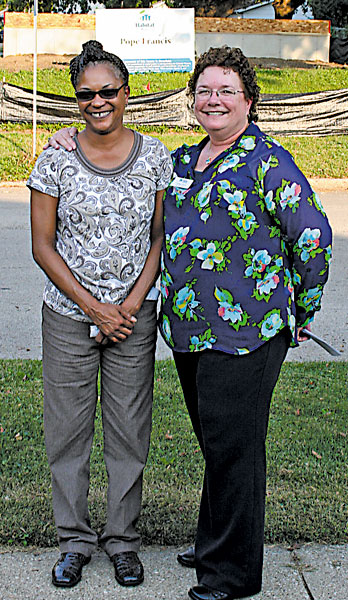 Habitat began working with the anonymous donor in December 2014. This spring HSHS St. John's Hospital pledged just over $30,000 toward the project. The remaining $9,700 came from the diocesan Campaign for Justice and Hope, Catholic business owners and organizations, parishes and schools in Sangamon County, and from individuals at the diocesan Curia.

Among the people on hand for the blessing was Penney Porter, the future Habitat homeowner. Porter, who is in her mid-50s, has raised her two daughters and one son as well as four granddaughters, all in rental properties. "She didn't think she would ever be able to purchase her own home," said Stone. "She knew her finances were not in the best shape and as she says, 'I didn't have a clue on how to get started toward home ownership — what to do or who to see.'"

Porter said she was approved "through the grace of God" and started to work cleaning up her finances, accumulating volunteer hours (many of those hours were spent volunteering in the renovation of the Habitat ReStore in Springfield), taking classes to help her as a homeowner and working with her Habitat "nurturer" Nancy Hohenstein. Although Porter had already met her required hours of "sweat equity" well in advance of her build, she is also working on her own future home.

"I just want to thank God for being able to become the recipient of a Habitat home," Porter said. "I want to thank the anonymous donor, whoever you are, and all the Habitat people, from the bottom of my heart."

Stone called the Pope Francis build "a fabulous opportunity" and concluded, "Partnering with the Catholic community is absolutely wonderful."