ROME — Dominic Rankin, a seminarian for the Diocese of Springfield in Illinois who is studying at the North American College in Rome, was to have been ordained to the diaconate on Sept. 28 at 9:30 a.m. Mass in St. Peter’s Basilica.

The ordination Mass was to have taken place at the Altar of the Chair, celebrated by Bishop James F. Checchio, of Metuchen. “He was the rector at the North American College my first year-and-a-half there,” Deacon Rankin says. “The altar is the one on the far back wall (behind the main altar that only Pope Francis uses) and below the famous window of the Holy Spirit.” 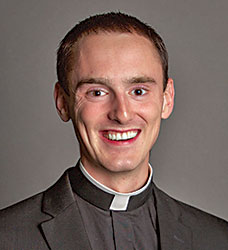 ROME — Dominic Rankin, a seminarian for the Diocese of Springfield in Illinois who is studying at the North American College in Rome, was to have been ordained to the diaconate on Sept. 28 at 9:30 a.m. Mass in St. Peter’s Basilica.

The ordination Mass was to have taken place at the Altar of the Chair, celebrated by Bishop James F. Checchio, of Metuchen. “He was the rector at the North American College my first year-and-a-half there,” Deacon Rankin says. “The altar is the one on the far back wall (behind the main altar that only Pope Francis uses) and below the famous window of the Holy Spirit.”

Deacon Rankin is a Quincy native and is a member of St. Rose of Lima Parish. His parents are Mark and Stephanie Rankin. He has a twin sister, Sister Mary Thomas Rankin, OP, and a younger brother, Alexander Rankin.

“I grew up in Quincy, a town that, having now been stationed at various places in the diocese, I have found is kind of in the middle of nowhere, a factor that sometimes makes it delightful, but always means getting back is a long drive — or flight,” he says. “I was homeschooled all the way through high school, something which I have received innumerable blessings from, not least of which is having a very tightly knit family, a number of good friends that I still love to catch back up with, and an academic and human foundation which has remained a great gift in the years since.

“I did my first two years, after two years of community college, at Bishop Bruté College Seminary where I studied the philosophy ‘side’ of things,” says Deacon Rankin. “I have been in Rome for three years, doing the second stage of my seminary studies — the theology ‘side’ of things. Certainly, to be far away from family and friends, to take my classes in Italian, to be living in a still-foreign culture are all necessary sacrifices of being over here; however, even those sacrifices have themselves been incredible opportunities to grow in my own humility, trust in God and patience. And, there truly are tremendous blessings to living, praying and studying here. Beyond the history, art and being close to our Holy Father, I am particularly grateful and constantly delighted by the lives, examples, and tombs of so many of the saints from all ages as well as being brothers with 250 truly exemplary and amazing young men.”

Even though he is living far away, Deacon Rankin had a good number of family members and friends who flew in to be present for his ordination. “I am incredibly blessed to have a number of family members who came to be here: both my parents — to whom I am immensely grateful for their raising me in a way that has allowed me to hear and follow God’s call — as well as my brother and his fiancé. The only immediate family member not present is my twin sister, but since she has professed first vows as a nun at the Dominican Monastery of St. Jude, I think she has a pretty good excuse to not be here. And, I expect she has been praying rather fervently for me all the same!” Also traveling to Rome were one set of his grandparents as well as several aunts, uncles, cousins and “even a couple further-flung family and friends.”

Also attending the ordination to represent the Diocese of Springfield in Illinois: Father Peter Harman, the rector of the North American College and newly-ordained Father Michael Friedel, who is in his final year of studies there.

Deacon Rankin asked a classmate who was ordained a deacon over the summer to vest him: Deacon Mitchell Brown, from the Diocese of Gallup, New Mexico. “I picked him because he has not only become a good friend these past years, but is also an exemplary model of the virtues and attitude of generosity that a deacon, and future priest, should have.”

Looking back, Deacon Rankin says the priesthood has been on his mind since he was a small boy. “I’ve heard it said that you don’t ‘know’ you’re called to the priesthood until your ‘nose hits the marble’ during the Litany of the Saints in the middle of the ordination Mass. And there’s some truth to the saying because it’s God who makes one a priest, essential to the vocation is being willing to relinquish control, to follow even when his voice is quiet, to keep seeking even when you don’t absolutely ‘know.’ However, I first thought about priesthood when I was about 4 or 5, along with being a firefighter, and an astronaut, and a wheel engineer — that’s what my dad does — so at that age it was just something that I thought was cool, hence the desire.

“However, that thought as a little kid was something that stuck with me — no doubt because of God’s patience and persistence, but also because my parents raised me in a good Catholic environment that allowed that little seed or flame to gradually grow,” he says.

“As far as other mentors go, I’ve had a number of good priests in my life including Father John Carberry, my first pastor who taught me to serve, and Father Chris House, who was instrumental in encouraging me when fear was holding me back from seminary, but in the interim, all-important, years of high school it was probably the encounters that I had with seminarians and young priests that truly lit the ‘fire within me,’ showing me how seminary worked, exciting me with the idea of being a priest for Christ and his church, and captivating me by their joy and enthusiasm.”

Deacon Rankin says he has a special request that he is making on behalf of himself and all diocesan seminarians. “Please, please, please, pray for me! And pray for all the current and future seminarians of our diocese. I, all the current guys, and — though they don’t know it yet — our future seminarians too, are thrilled to be called to minister as priests in our diocese, but it’s your prayers that fortify and encourage us in that vocation. We’re beyond grateful for them, and for the gift that it is to act as your priests — so thank you!”

In closing he says, “Finally, to everyone who has been instrumental in my own path to priesthood, and to Our Lord who has called me to his altar, many thanks. Everything for Christ, and with him!”