Sometimes life doesn’t go as planned, but with prayer, perseverance and some assistance from caring individuals, new good things can happen. That’s what the Springfield Dominicans have discovered with the launching of a new ministry of mutual support for young women.

The mission of Cor Unum — which is Latin for “one heart” — includes opening a house in Springfield to welcome women for prayer, community, socializing and for a few women, a place to live. Plans for this new ministry originally began in 2015 but were stalled in 2017 when original housing plans fell through. 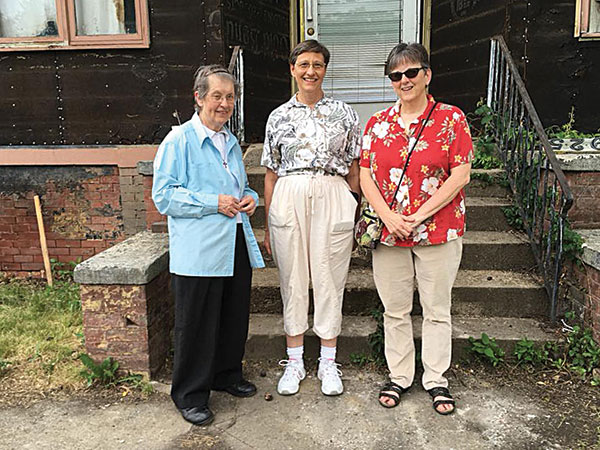 Sometimes life doesn’t go as planned, but with prayer, perseverance and some assistance from caring individuals, new good things can happen. That’s what the Springfield Dominicans have discovered with the launching of a new ministry of mutual support for young women.

The mission of Cor Unum — which is Latin for “one heart” — includes opening a house in Springfield to welcome women for prayer, community, socializing and for a few women, a place to live. Plans for this new ministry originally began in 2015 but were stalled in 2017 when original housing plans fell through.

According to Sister Mary Clare Fichtner, OP, while they were searching for a new location for their residence, the sisters began welcoming young adult women for prayer and social activities. In doing that they discovered women who are busy with school and work seek prayer, mutual support, and want to invest in activities that help improve civic society. A new model was born out of that realization, she says.

The home base of Cor Unum will be a long-vacant, century-old home in Springfield’s Enos Park neighborhood, which is under renovation. Fletcher Farrar, president of the not-for-profit Old Neighborhood Rehab Inc. who has been responsible for at least 25 completely restored historic homes in the area, acquired the home from the Enos Park Neighborhood Association. With Farrar’s help, and the commitments of architect John Shafer and contractor Calvin Pitts, the home will include an addition to make the ground floor accessible and provide the meeting and living space the new community needs.

The Dominican sisters are renting-to-own from Farrar. Nearly two decades ago, Farrar rehabbed another home for the Dominican sisters. Two sisters currently live in that house, which is just a few blocks away from the Cor Unum home.

Sister Mary Clare and two other sisters, Sister Beth Murphy, OP, and Sister Lori Kirchman, OP, plan to move into the home later this year. They will have room for up to three other women to reside there. However, says Sister Mary Clare, “The house will anchor outreach to many more people.”

Sister Lori says they have had conversations with women who have joined the sisters for prayer, movie and game nights, that led them to discover that sometimes women feel isolated. “They are very busy and socially engaged,” she says. “Our goal is to provide support and a space for them to slow down, unplug, and discover what is missing in their lives.”

For practical reasons, women seeking residency with the sisters need to work full time and/or attend college, and be 21 to 35 years of age, explained Sister Beth. She says some women, those who are ages 18-20, are interested and are welcome to join them in “creating a project that will take shape beyond the boundaries of our home.” The lay women won’t be expected to commit to a professedS religious life and although they won’t pay rent, they will be expected to contribute for food and to the finances of the household.

“We check in pretty regularly and are so excited to see the progress,” says Sister Beth. “We were there yesterday but couldn’t get inside because they’ve deconstructed the porch in preparation for building the new one. It’s going to be a beautiful porch! We think we’ll be in at the end of December. Right now, that is hard to imagine but the contractor says he’s running on schedule so far.”

The three sisters bring strong individual traits to the group, and Sister Kathleen Gallagher, a member of the Springfield Dominican General Council and liaison for the project, says they are “the right team.”

Sister Mary Clare, who is in her late 70s, has decades of experience in pastoral leadership and community organizing. She represents the Dominicans on the Faith Coalition for the Common Good and oversees distribution of supplies at Sacred Heart Convent.

Sister Beth, 59, is the communication director for the Dominican Sisters and is engaged with social justice concerns, including SDART and the Iraq Coordination Committee, an initiative of the U.S. Dominican Justice Promoters.

Sister Mary Clare, Sister Beth and Sister Lori are following the 145-year tradition of the Dominican Sisters, who accompany marginalized communities and help meet unmet needs. It began when the Dominicans served Irish immigrant families at their first mission, which was teaching children at what today is Our Saviour Parish in Jacksonville. Today they dedicate resources and energy to dismantling racism, analyzing and responding to social injustice, and at their eco-spirituality center, Jubilee Farm.

“Our Cor Unum mission is to accompany young women of diverse backgrounds on their life’s journey, providing them with support, encouragement and space to question, deepen and grow in relationship to God, to people, and to the planet,” says Sister Beth. “We expect an experience of mutuality — learning alongside and growing together in the One Heart that holds us all.”

And fulfilling that mission in Enos Park is a good spot for the Dominicans, concludes Sister Rebecca Ann Gemma, OP, prioress general of the Dominican Sisters. “The involvement of the neighborhood association, the Springfield Art Association, and the proximity of the medical district make it a wonderful location for our sister’s presence, providing many opportunities to build relationships and to serve in a wonderfully diverse and thriving neighborhood.”

More information about Cor Unum is available by visiting www.springfieldop.org/cor-unum or by calling (217) 787-0481.