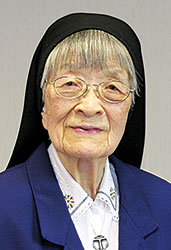 Sister Joseph Wu, OSF, of the Hospital Sisters of St. Francis died on June 4 at St. Francis Convent in Springfield. She was 98 years old.

In 1963, Sister Joseph graduated from St. John’s Hospital School of Nursing. She received a bachelor’s degree in inhalation therapy in 1974. She served as a nurse and respiratory therapy technician at HSHS hospitals in Illinois from 1963 until 1978. In 1978, she continued working in the Maternity Department and surgical waiting area of HSHS St. Mary’s Hospital in Decatur, until 1989. After her retirement from active duty in 1989, Sister Joseph served as a volunteer at HSHS St. John’s Hospital in Springfield, until 2013. In 2013, she returned to the motherhouse in Springfield, where she volunteered in various capacities until her health no longer permitted her to do so.

In addition to her parents, she was preceded in death by one brother, Peter Wu.

She is survived by three nieces and a nephew, all from the People’s Republic of China, as well as her Franciscan Sisters with whom she shared her life for nearly 74 years.

A visitation was held on June 6, at St. Francis Convent, including Evening Prayer and remembrance. The Eucharistic Celebration and Rite of Christian Burial was celebrated by Father André Schludecker, OFM, on June 7, in St. Clare of Assisi Adoration Chapel at the St. Francis Convent. Burial was in Crucifixion Hill Cemetery.