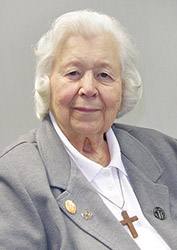 Sister M. Viola Swoboda, OSF, of the Hospital Sisters of St. Francis died on Oct. 10 at St. Francis Convent in Springfield. She was 91.

She was a graduate of St. John’s Hospital School of Nursing in 1955. She received a bachelor’s degree in nursing from Arizona State University in 1971. She obtained additional education in nurse midwifery and did post graduate studies in obstetrics. She served as a practical nurse at St. Joseph’s Home for the Infirm and Aged in Monroe, La., from 1951 until 1953. After completing her additional education, Sister M. Viola was assigned as the maternity supervisor at HSHS St. Elizabeth’s Hospital in Belleville from 1956 until 1964. From there, she served at St. Isabel’s Mission in Lukachukai, Ariz., as a nurse in the OB clinic until 1971. She then served in Fort Defiance for the U.S. Public Health Service as a nurse midwife until 1975. She then relocated to Chinle, Ariz., where she became head nurse for the Bureau of Indian Affairs. In 1993 she returned to Springfield to serve as a volunteer in the ICU Department at HSHS St. John’s Hospital for many years. She joined the Loretto Home Community of Sisters at St. Francis Convent in 2016.

She is survived by two sisters-in-law, Dyllis Swoboda of Chippewa Falls, Wis., and Susan Swoboda of Marshfield, Wis., numerous nieces and nephews, great-nieces and great-nephews and her Franciscan Sisters with whom she shared her life for over 74 years.