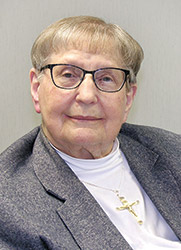 Sister Anna Clara Rick, OSF, of the Hospital Sisters of St. Francis died on Oct. 11 at St. Francis Convent in Springfield. She was 90.

Sister Anna Clara was a graduate of St. John’s Hospital School of Nursing in 1956. She went on to earn a post-graduate degree in surgery from HSHS St. John’s Hospital in Springfield in 1957. She began her career as a nurse in the Surgery Departments at HSHS Hospitals in Illinois and Wisconsin. She served as an instructor at Copley Memorial Hospital School of Nursing in Aurora from 1971 until 1975 during which time she attended Aurora College and earned a bachelor’s degree in 1973. She returned to surgical nursing in 1976 at St. Joseph’s Hospital in Joliet, where she served until 1979. She then returned to St. Francis Convent in Springfield in 1979 and worked in various departments until 1985 when she served at HSHS St. John’s Hospital, Springfield, as a medical records coder. In 1989 she returned to St. Francis Convent and served as sacristan until 1993 when she relocated to Breese and served in the Social Services/Pastoral Care Department of Breese Nursing Home until 1997 when she retired from active duty. She continued to serve in a volunteer capacity at Breese Nursing Home until 2004 when she returned permanently to St. Francis Convent in Springfield.

She is survived by two sisters, Coletta Rau of Columbia, and Eunice Warren of Smyrna Tenn., many nieces and nephews, great-nieces and great-nephews, as well as her Franciscan Sisters with whom she shared her life for over 73 years.

Staab Funeral Home - Springfield was in charge of arrangements.