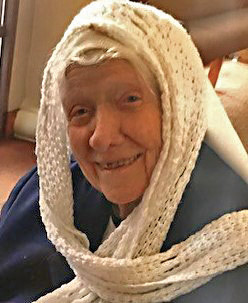 ST. LOUIS — Sister Marie McCloskey, OSU, died peacefully Oct. 4, at Our Lady of Wisdom Healthcare Center in New Orleans, at age 105. She taught in the Springfield diocese during the 1960s and 1970s.

Sister Marie taught with the Ursuline Sisters for two years before entering the order in July 1938 and professing her vows in January 1941. She spent the next 40 years teaching at Ursuline schools in New Rochelle, N.Y.; Galveston, San Antonio and Laredo, Texas; Decatur and Alton; and New Orleans. She also served at Villa Maria Retreat and Conference Center in Frontenac, Minn.

In the Diocese of Springfield in Illinois, Sister Marie taught at St. Teresa High School in Decatur from 1967-1976 and at Marquette High School in Alton from 1976-1979.

Throughout her years of ministry, she served in many leadership roles, including as principal of Ursuline academies in New Orleans and Laredo and prioress of several local Ursuline communities. In 2008 she moved to the Ursulines’ Queen of Peace Healthcare Center in Alton before returning to her native New Orleans in 2014.

A funeral Mass was celebrated Oct. 11 at the National Votive Shrine of Our Lady of Prompt Succor in New Orleans. Burial was in the Ursuline Sisters’ mausoleum on the campus of Ursuline Academy of New Orleans.