Veterans are the backbone of our great nation. Their sacrifice, dedication to freedom, and helping the people of the world — we are forever indebted to their service.

The Diocese of Springfield in Illinois is blessed to have several priests who also served our country. One of those is Father Stephen Thompson, pastor of Holy Family Parish in Mt. Sterling and St. Thomas Parish in Camp Point.

Father Thompson embodies honor, courage and commitment, values that have deep meaning to him as a Marine. He served our country for four years in the early 1990s as an E-4 corporal as a data communications operator. He served in the Persian Gulf War under Desert Shield and Desert Storm with the 1st Marine Division and the 13th Marine Expeditionary Unit under the United States Navy on the U.S.S. Okinawa.

Veterans are the backbone of our great nation. Their sacrifice, dedication to freedom, and helping the people of the world — we are forever indebted to their service. 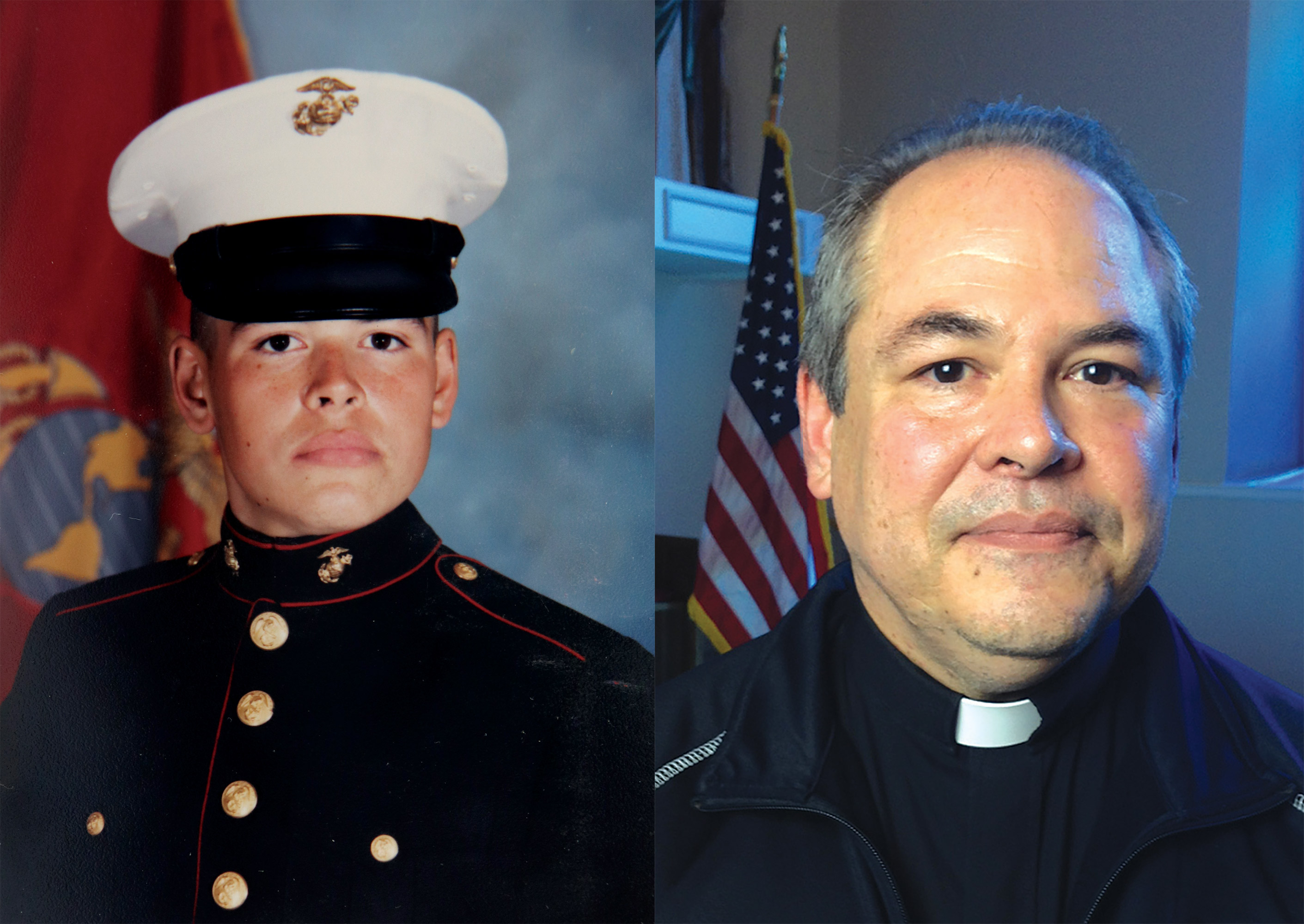 The Diocese of Springfield in Illinois is blessed to have several priests who also served our country. One of those is Father Stephen Thompson, pastor of Holy Family Parish in Mt. Sterling and St. Thomas Parish in Camp Point.

Father Thompson embodies honor, courage and commitment, values that have deep meaning to him as a Marine. He served our country for four years in the early 1990s as an E-4 corporal as a data communications operator. He served in the Persian Gulf War under Desert Shield and Desert Storm with the 1st Marine Division and the 13th Marine Expeditionary Unit under the United States Navy on the U.S.S. Okinawa.

After serving our country, Father Thompson attended SIUE and ITT Tech in Earth City, Mo., obtaining an associate’s degree in science. After working several jobs in the St. Louis area, he answered his priestly vocation call, entering the seminary in 2004, becoming a priest in 2010.

Catholic Times Editor Andrew Hansen caught up with Father Thompson to talk about his life as a Marine, how it has helped his vocation as a priest, and advice he has for all of us as we encounter our spiritual battles.

What drew you to serving our country, especially as a Marine?

I grew up in a family that came from a long history of military service. My mother would tell me stories about her brother Ascension, Sean as he was known. He served over 20 years in the United States Marine Corps and achieved the rank of gunnery sergeant. He served in Korea, the Guadalcanal and Vietnam. He separated from the Marines briefly in the early 1960s and returned to active duty when the Vietnam War began. He served three tours and was killed early in his third tour by shrapnel wounds suffered by a grenade used in a booby trap. He saved his platoon and received several honors for his act of heroism. Though I was born just one year after his death, I felt a connection with him because of his heroism and bravery. I had talked to my parents about joining the Marines, even as a young kid. My dad was an Air Force veteran and had hope that I would follow his path if I were to ever join the military. I was drawn to the history of the Marines and wanted a challenge beyond my wildest dreams. I believe I wanted to serve my country because it was the noble and honorable thing to do and I, by nature, want to serve the needs of others, especially freedom when there is injustice.

Describe the physical, emotional and psychological effects while you served. Did you experience anything or see anything that has really left a mark and how did our Catholic faith shape that experience? 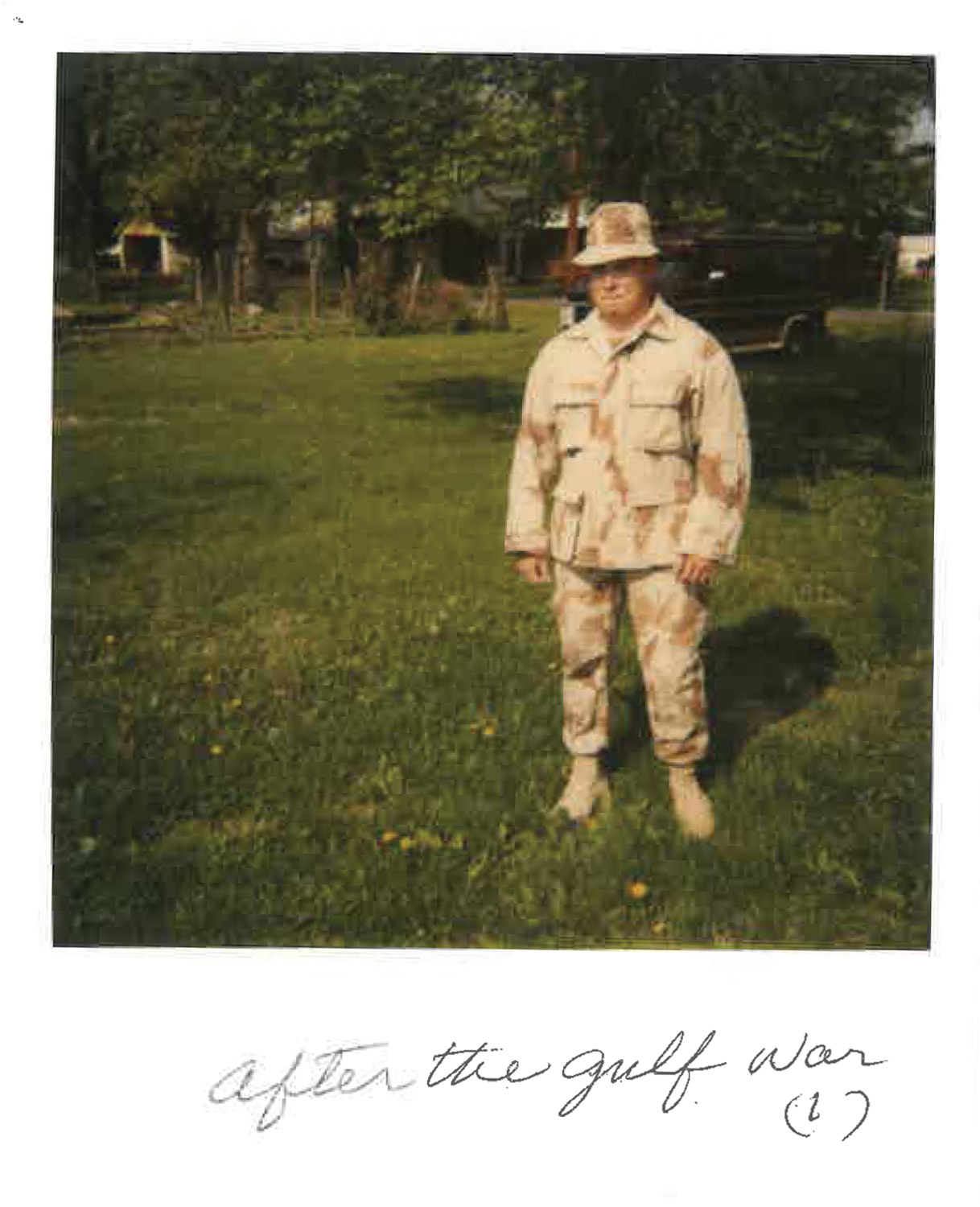 Oh yes. While I didn’t engage in fire fights or close combat, being in a communications platoon put me and my platoon at great risk of mortar fire, artillery fire and missile strikes. We experienced a number of those. We also experienced chemical and biological attacks which meant wearing gas masks and chemical and biological preventive gear daily as we advanced toward Kuwait. We also had to take anthrax pills as a preventative to the use of anthrax agents in the field by Iraqi forces. I am currently enrolled in the Gulf War Syndrome database through the V.A. since I was exposed to chemical and biological agents. I was not treated for disability status, but do have periods of headaches, anxiety, depression and physical pain due to the harshness of active duty on and off the battlefield. Many veterans talk about sights, smells and sounds that cause flashbacks. That is a common occurrence for me. I believe that my Catholic faith helped me to cope with the tragedy of war in that war is not pretty, any more than our battle with sin is not pretty. I had a greater reliance on prayer and a deeper sense of compassion and mercy upon the “enemy.” The Iraqis were fighting us as we were perceived as an enemy to them. It reminds me of St. Paul’s prescription to the Corinthians that our battle is not with flesh and blood, but with principalities and powers, spiritual hosts of wickedness.

How did you practice your Catholic faith while serving our country? Was it difficult or was it something that helped you?

I attended Mass on occasion, but I can’t say it was central to my life, unfortunately. I put myself above my faith and love of God and neighbor. I wanted to experience the best that life had to offer, giving in to the wiles and temptations of a worldly life. I prayed on occasion, but prayer wasn’t central to my life. I did have occasions when I expressed my faith to my brother and sister Marines and had a high sense of conscience, ill-informed or not. I often saw myself as a hypocrite for not living up to my faith and a good morality while at the same time pointing out how some of my brother and sister Marines were living their lives contrary to good morality.

When you look at your journey of serving as a Marine, to now a priest, what goes through your mind?

I think often that God is so merciful and loving in showing me a greater path to be on. I never denounce my service to my country as a Marine, but I believe strongly that I was lost in not living my faith and denying myself of the sacraments, especially the sacrament of penance. It was through the sacrament of penance and reception of the other sacraments and a greater understanding of the Catholic faith that I was able to discover my vocation to the priesthood. My journey as a former Marine and living a worldly life has led me to relate better to the ills of the world and society at large — to relate to those who struggle in their faith. 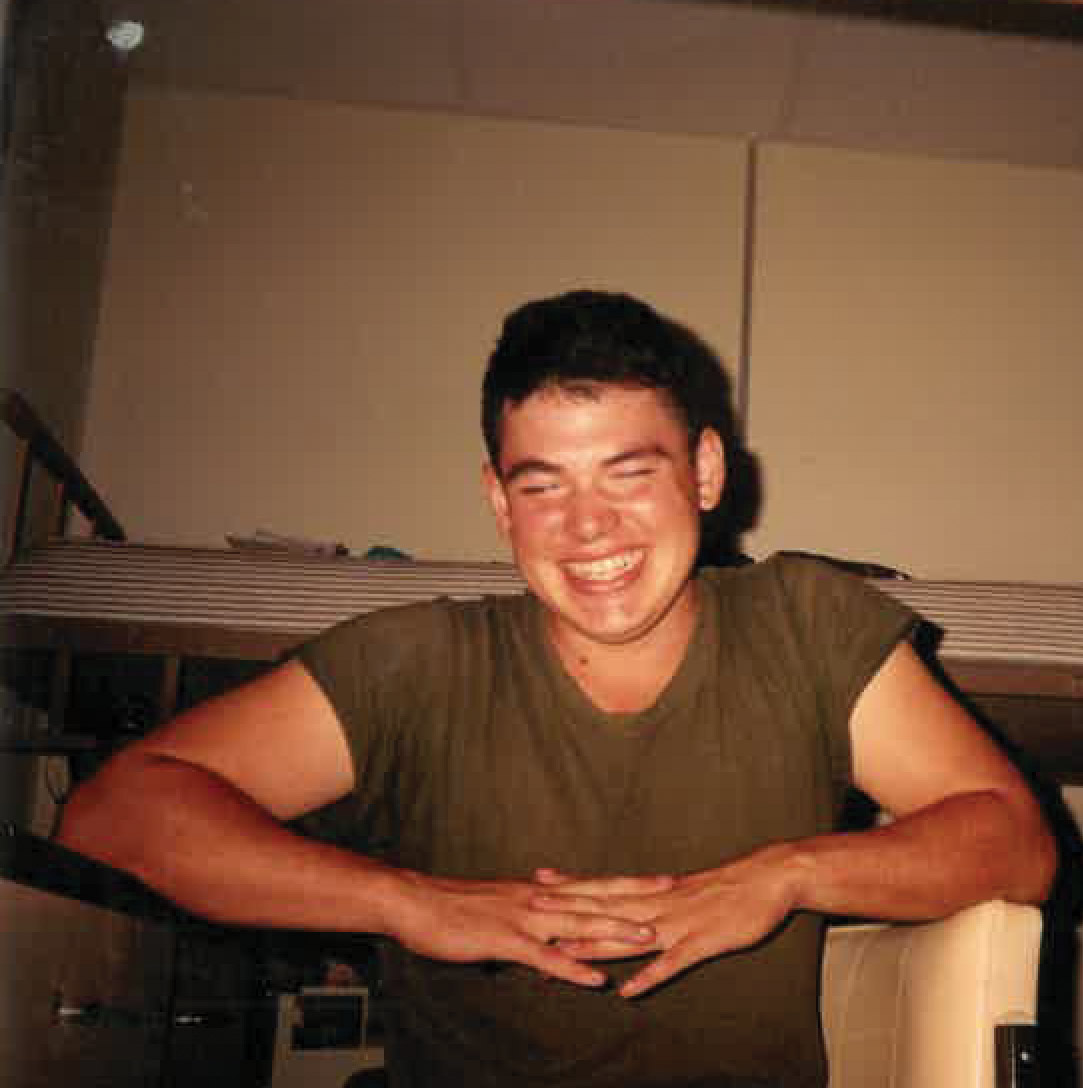 How did your experience as a Marine help you today as a priest?

The sense of discipline, order and sense of duty and service to others have been attributes I learned from the Marines that blend into my priesthood. Having been in battles on the battlefield of war and in my own life have helped me counsel others on the pitfalls and struggles they endure in life. I recognize too that I am a work in progress. I am not perfect and cannot expect perfection from others if I don’t work on myself. The value of teamwork has guided my ministry and how I see the journey of others on the path to holiness and the kingdom of God. The great mantra of the Marines is “Semper Fidelis,” “Always Faithful.” That is a mantra I carry with me in my priesthood. The chain of command form of governance has helped me achieve the promise of obedience to the bishop and acceptance of his authority. Authority is very important in the life of a Marine and as a priest. The sense of brotherhood in the Marines has helped me see my brother priests as brothers in arms.

I think it’s always best to put into perspective what I mentioned prior; that our battle is not with flesh and blood, but with principalities and powers, spiritual hosts of wickedness. There are certainly battles we have with each other that we must face, but our battle is about winning souls for Christ. We have to keep the end goal in mind, the kingdom of God. We can’t give up or lose hope, but fight the good fight, as St. Paul says. If our battle is with Satan, defined adversary, then our sights have to be set on him as the one who wants to keep us from God’s love. Our struggles with evil that come from the evil acts of others are most often related to sadness that it is evil choices being made and not the person who is being evil. What does Jesus say from the cross, “Father forgive them, for they know not what they do.” We must recognize that the person is being used by the evil one for his purpose of destroying the person and denying him a fruitful relationship with God. We hate the sin and love the sinner; hard to do, but we cannot fall into committing evil acts to achieve justice for the wrong others have committed against us.