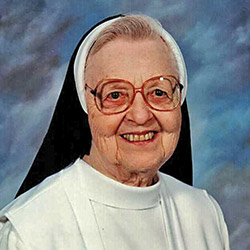 Sister Ann Therese’s calm temperament and kind demeanor suited her well for her ministerial life. For a total of 28 years she taught music in Catholic elementary schools throughout Illinois in Paris, Philo, Carrollton, Penfield, Granite City and Aurora. During her six years in Philo, she was also the principal. For another 22 years, she was a classroom teacher, first at her home parish, St. Edward in Chicago; then at Holy Cross in Mendota, 1970-1979; and finally, at Ss. Peter and Paul in Cary, 1979-1990.

Sister Anne Therese was preceded in death by her parents; her brothers, William (Estelle) and Peter (Margaret) Haupers; and her sister, Catherine (Robert) Lewis. She is survived by her nephews, Peter, Michael and Joseph Haupers, and Jim Lewis; her nieces, Joan Kallas and Catherine Smith; and her Dominican Sisters.

A visitation, prayer service and funeral Mass were held on Nov. 25, with Father Peter Witchousky, OP, celebrant. Morning Prayer, Remembering and Final Commendation was on Nov. 26. All services were held at Sacred Heart Convent Chapel. Burial followed at Calvary Cemetery.

Donations may be made to the Dominican Sisters Retirement Fund, 1237 W. Monroe St., Springfield, IL 62704.

The Dominican Sisters and family of Sister Ann Therese were served by Butler Funeral Home-Springfield.