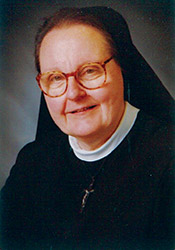 Sister Mary Gabriel graduated from X-ray school as a radiology technician in Peoria in 1960. She then worked as the supervisor of the Radiology Department at Saint Anthony’s Hospital for 30 years. In 1990, she was transferred to St. George Convent in Tulsa, Okla., where she worked in the office of Catholic Charities. She was then transferred in 1993, to work in the office of Marian Heights Apartments in Alton. In 1995, she was transferred to St. Joseph Convent in Lincoln, Neb., where she served the retired priests as a housekeeper at Bonacum House. A year later, she was transferred to the Mother of Good Counsel Home, in St. Louis. She worked in the chapel and served her sisters in the dining room. After 18 years, she returned to Alton to pray and to visit with people in OSF Saint Anthony’s Health Center.

Sister Mary Gabriel is survived by one sister, Margaret Gibbons, of Alton; brother, Martin Gibbons, of St. Louis; brother and sister-in-law John and Barbara Gibbons of Godfrey; one niece; two nephews; and nine great-nieces and great-nephews.

Memorials may be made to the Sisters of St. Francis of the Martyr St. George.

Staten-Fine Funeral Home of Alton was in charge of arrangements. Guestbook and on-line condolences may be found at www.staten-fine.com.