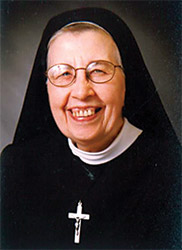 She worked in the kitchen from 1953 to 1954 in Schwagstorf, the motherhouse in Thuine, and Borkum, all in Germany. After her transfer to the United States in 1954, she worked for 37 years in the kitchen at Saint Anthony’s Hospital in Alton. She then worked for two years in the refectory at St. Francis Convent, Alton. In 1993, she was transferred to St. Sixtus Convent in Hastings, Neb., where she cooked for the sisters. In 2006, she returned to Alton to be an adoration sister. She also assisted, as much her health allowed, in the convent kitchen.

Sister M. Wencesla is survived by one sister, Theresia Wehmeyer, in Algermissen, Germany, and a niece and a nephew. Her relatives reside in Germany.

A visitation with a wake service was held on Jan. 10, at the convent chapel of the Sisters of St. Francis of the Martyr St. George in Alton, officiated by Deacon William Kessler. A Mass of Christian Burial took place on Jan. 11, also at the convent chapel, celebrated by Father Benjamin Unachukwa, OMV. Burial followed at St. Joseph’s Cemetery in Alton.

Memorials may be made to the Sisters of St. Francis of the Martyr St. George.

Condolences and guestbook may be found at www.staten-fine.com.