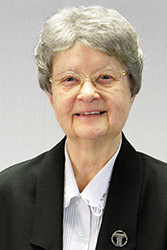 Sister Elvon graduated from St. John’s Hospital School of Nursing in 1942. In 1944, she graduated from DePaul University with a bachelor’s degree in biology. She completed post graduate studies in surgery at St. John’s Hospital, Springfield, in 1945. In her long life of ministries, Sister Elvon served as a surgical nurse, OR supervisor, and director of Pastoral Care. She continued in her pastoral care ministry until her retirement and then served as a volunteer at HSHS hospitals in Illinois and Wisconsin.

She is survived by two sisters: Sister M. Elreda Huser, OSF, of Springfield, and Betty Bymers of Wisconsin Rapids, Wis., many nieces and nephews, many great-nieces and great-nephews, as well as her Franciscan Sisters with whom she shared her life for over 83 years.

A visitation with a wake service was held at St. Francis Convent on Jan. 9. The Eucharistic Celebration and Rite of Christian Burial took place on Jan. 10 at St. Francis of Assisi Adoration Chapel with Father Dennis Koopman, OFM, celebrant. Burial followed in Crucifixion Hill Cemetery.