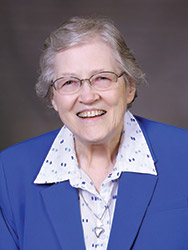 She earned her bachelor’s degree in speech therapy, with a minor in education, from Saint Louis University in 1960, and her master’s in elementary education from the University of St. Mary in Leavenworth, Kan., in 1965.

In Illinois, she taught and was house mother at the former Catholic Children’s Home in Alton. She also taught and/or served as principal at St. Ann in Nashville, St. Andrew in Murphysboro, St. Joseph in Olney, St. Clare in O’Fallon, St. Mary in Taylorville, Immaculate Conception in Centreville, St. Boniface in Evansville and St. Mary in Chester. She also was superintendent of schools for the Clinton County (Illinois) School District No. 63 in Albers. In addition, she served several places in Missouri.

She was liaison to the Adorers’ Associates, the spiritual leader of the sisters at the Ruma Center and director of mission integration at St. Clement (now Red Bud Regional) Hospital in Red Bud. Her final ministry was as director of Food Pantry Services for Catholic Charities in Quincy.

She was gentle, kind and generous, dedicated to prayer, liked to have fun, and appreciated good food. She was an avid card player and quilter and lover of nature.

Sister Theresa Marie is survived by her sisters Charlene A. Kogler and Bernadette (Charles) Dignan; nephews and nieces Will (Jenny) Kogler, Lynette Kogler, George (Valentina) Dignan and Charles Dignan Jr.; and members of the U.S. Region of Adorers.

She was preceded in death by her parents, her brother Robert (Buddy) Braun, OMI, and her sister Rita Braun.

Donations in memory of Sister Theresa Marie Braun may be sent to the Adorers at 4233 Sulphur Ave., St. Louis, MO 63109 or made online at www.adorers.org.