Father Carberry passes away at age 92

QUINCY — Father John P. Carberry, a priest of the Diocese of Springfield in Illinois for nearly 40 years, died on Jan. 21 at the Illinois Veterans Home in Quincy. He was 92 years old.

He was born on May 15, 1927, in Springfield, to Thomas and Margaret (Sullivan) Carberry and they preceded him in death. 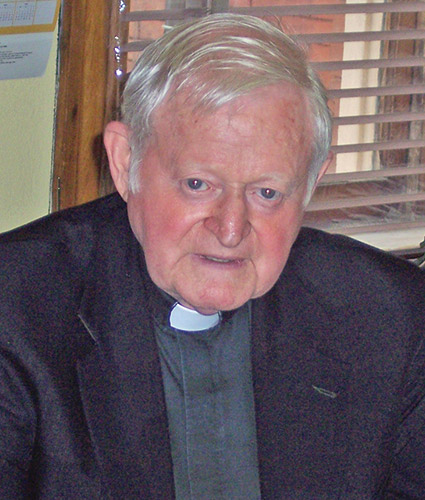 He grew up in Springfield and graduated from Cathedral Boys High School in 1945 and served in the United States Navy during World War II. After several decades in the work force — including 21 years at Our Saviour’s Hospital (now Passavant Area) in Jacksonville — he prepared for the priesthood at Sacred Heart School of Theology in Hales Corners, Wis.

On May 30, 1981, when he was 54 years old, Father Carberry was ordained by Bishop Joseph A. McNicholas at the Cathedral of the Immaculate Conception. His first assignment as a priest was assistant pastor at St. Patrick Parish in Decatur and assistant chaplain at Millikin University from 1981 to 1986. He was pastor at Holy Trinity in Stonington and St. Stanislaus in Macon from 1986 to 1989. From 1989 to 2002, he was pastor at St. Boniface Parish in Quincy. He later became parochial administrator at St. Boniface, from 2002 to 2006 and retired in 2006.

A visitation with a prayer service was held on Jan. 24 at the Illinois Veterans Home in Quincy. A second visitation took place on Jan. 25 at the Cathedral of the Immaculate Conception, followed by a concelebrated funeral Mass with Bishop Thomas John Paprocki as the main celebrant. Burial followed at Calvary Cemetery.

Memorial contributions in Father Carberry’s honor made be made to Legion of Mary, Springfield Right to Life or Illinois Veterans Home in Quincy.