St. Jude Thaddeus, Apostle of the Lord and preacher of the Good News, is the patron of hope and of difficult situations. This Lent, through the intercession of St. Jude, all are welcome to join the parishioners of St. Aloysius Parish in Springfield as they pray for God’s grace in letting go of what keeps us spiritually “stuck” in the quagmire of life’s difficulties. 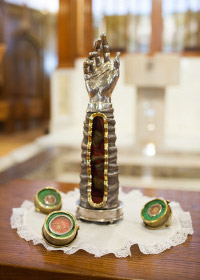 After his martyrdom, the body of St. Jude was buried temporarily in Mesopotamia and then given permanent internment in St. Peter’s Basilica in Rome with the other Apostles.  His forearm was incased in a silver reliquary and located for many centuries in Armenia. It was subsequently moved several times.

In 1949, the Dominican Province of St. Peter Martyr in Turin presented the relic to the Dominican Province of Chicago, on the 20th anniversary of the Dominican Shrine’s dedication to St. Jude. Today, the arm relic — reportedly the largest relic of an Apostle located outside of Europe — is permanently displayed at the shrine, located in St. Pius V Parish in Chicago. The shrine also boasts three much smaller relics of the Apostle. From time to time the relic is taken on tour for special events.

During the first week of Lent (March 2-4) the major relic of St. Jude and its smaller companions will be visiting St. Aloysius Parish and will be available for veneration. Masses which will incorporate veneration will be held at 7 p.m. on March 2, 3, and 4. On Tuesday the relic will be at the all-school Mass at 8:20 a.m. and with the students throughout the day. All are welcome to join at the Masses.