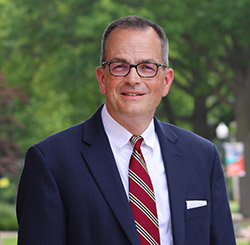 QUINCY — Quincy University’s Board of Trustees entrusted Brian McGee, Ph.D., with Quincy University’s mission during a formal ceremony Feb. 28. Bishop Thomas John Paprocki of the Diocese of Springfield in Illinois joined other religious leaders, city officials, community leaders, and members of the campus community in celebration at the official inauguration of Quincy University’s 24th president in St. Francis Solanus Chapel.

During his inaugural address, McGee, who has been at QU since July 1, affirmed his strong commitment to QU’s Catholic and Franciscan tradition. “In becoming QU’s 24th president, I have taken on the duty to protect and build on the heritage of this university, beginning with the Franciscan friars who started a college on the Illinois frontier, 160 years ago, with little more than faith in God and a healthy helping of audacity,” he said.

At the end of his inaugural address, McGee reiterated QU’s commitment to pursue truth, beauty and good. “We at Quincy University will reject any model of higher education in which students can avoid the serious consideration of life’s meaning, or the sense of the sacred, or the problem of evil, or the possibility of the divine,” he said.