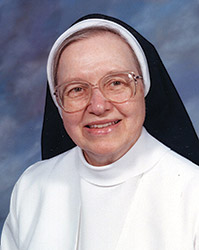 Sister M. Stephanie served as an elementary school teacher for 37 years, mostly in the Diocese of Springfield in Illinois, where she taught primary and middle grades at parochial schools in Farmersville, Springfield, Litchfield, Granite City, Morrisonville, Jerseyville, Bethalto and Decatur. She taught religious education from the Arcola Religious Education Center, 1970 to 1975. She taught in parochial schools in Chicago, 1978 to 1984: Our Lady of Grace, St. Christina, and St. John Bosco. For the 1984-1985 school year, she taught at Holy Cross School in Mendota.

In 1988, she joined the staff at St. Thomas Aquinas High School, Hammond, La., an innovative collaboration between the Dominican Friars of the Southern Province, the Diocese of Baton Rouge, and the Springfield Dominicans.

She also ministered as a librarian at St. Mary-Rogers Memorial Hospital, Rogers, Ark., 1997 to 2006. In 2006, she retired to Sacred Heart Convent where she assisted as she was able until shortly before her death. She delighted in greeting dining room guests and expressing her welcome with a repertoire of corny jokes.

Sister M. Stephanie was preceded in death by her parents; brother, Sylvan (Pete) Kapusta; and sisters, Genevieve Ozanic and Sister M. Bernadine, OP, also a Springfield Dominican Sister. She is survived by her sister-in-law, Anne Kapusta of Springfield; her beloved nieces, nephews and cousins; and her Dominican Sisters.

Because of the COVID-19 outbreak, no visitation or funeral Mass took place. Private burial services were held at Calvary Cemetery on March 26. A memorial Mass will be celebrated at Sacred Heart Convent on a date to be determined.