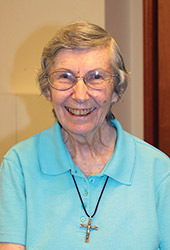 NEW ORLEANS — Sister Mary Patrice Clifford, OSU, died peacefully on March 29 in New Orleans. She served many years in the Diocese of Springfield in Illinois.

The daughter of Connell and Mary Eunice Clifford, Sister Mary Patrice was born Lillian Patricia Clifford on Sept. 2, 1935, in Oak Park. After her family moved to New Orleans, she attended Ursuline Academy there, graduating in 1953. She entered the Ursuline community that summer and professed her vows in 1956.

In 1984, she went to Cameroon, where she was part of the founding international community in N’Gaoundere. She taught in the secondary school there and later tutored pre-seminarians in English, delighting when they were ordained as priests. After serving nearly 34 years in Cameroon, in 2018 she retired in New Orleans.

Services for Sister Patrice will be held in New Orleans when it is possible to gather for a memorial Mass and celebration of her life.

Gifts in her memory may be made to the Ursuline Sisters Retirement Fund, 353 S. Sappington, St. Louis, MO 63122.