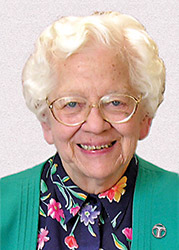 Sister Augusta Sperl, OSF, of the Hospital Sisters of St. Francis died on April 2 at St. Francis Convent in Springfield. She was 97 years old.

Sister Augusta, the former Bernadine Elizabeth Sperl, was born in Springfield on March 8, 1923, the daughter of August and Elizabeth Beckman Sperl. She entered the congregation on Sept. 8, 1939 and professed her religious vows on Oct. 4, 1942.

Sister Augusta graduated from St. John’s Hospital School of Nursing in Springfield in 1945. In her professional life, she served as a nurse, medical records librarian, administrator, pastoral care director and volunteer at HSHS hospitals in Illinois and Wisconsin. She retired from active duty in 2005 and returned to the motherhouse in Springfield.

She is survived by many nieces, nephews, great-nieces, great-nephews and cousins as well as her Franciscan Sisters with whom she shared her life for over 80 years.

Private services were held on April 6. A memorial Mass will be celebrated at a later date.

Staab Funeral Homes was in charge of arrangements.