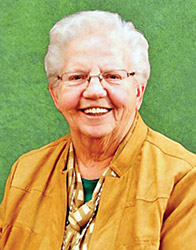 Sister Charlotte gave her early years of ministry to parochial school duties: teaching and pastoral music, in Duluth, Minn., Cary, and Mendota. From 1975 to 1985 she taught business at Sacred Heart Academy. After three years teaching at St. Thomas, Newton, she became a pastoral minister in Taylorville. She served five years as the founding director of the Springfield Dominican Associate Program, from 1990 to 1995, then spent 16 more years in pastoral ministry in Navarino, Wis., and St. Joseph Parish, Springfield. In 2015 she moved to the Dominican motherhouse, serving the community in various roles: grants secretary, communications assistant, and purchasing agent. One of Sister Charlotte’s great joys was the summers she spent teaching on the Oneida Reservation in the Diocese of Green Bay, from 1972 to 1980.

Sister Charlotte was preceded in death by an infant sister, Mary Leta; her parents; her brothers John, Joseph, James, Philip, Daniel, Paul, Ronald and Larry; and her sisters, Margaret Thomas, Kathryn Pohlman, Frances Ramsey, and Judith Bennett. She is survived by her sister Connie Stuhmer of Petersburg, 35 nephews, 29 nieces, dozens of loving great-nieces and great-nephews, grand-nieces and grand-nephews, and her Dominican Sisters.