Trummer to be ordained to transitional diaconate

On June 19, Bishop Thomas John Paprocki is set to ordain Chris Trummer, a parishioner at St. Mary of the Assumption Parish in Neoga, to the transitional diaconate for the Diocese of Springfield in Illinois. He is the son John and Margaret “Bitsy” Trummer, has an older brother Johnathon “Jonny” and two younger siblings, twins Katrina and Deacon Michael Trummer. This summer, he looks forward to becoming an uncle to twins — his sister’s children.

Trummer, who has been studying in Rome for several years, entered the seminary in 2013, after he had studied automotive technology for two years. “For a couple years leading up to that decision, I had rediscovered and recommitted to my Catholic faith after several years of indifference and skepticism about God, Jesus Christ, and the claims of the Catholic Church. I had developed a lot of intellectual obstacles to the faith that had to be broken down over time by God’s grace and study. Even after many of my questions and doubts about God and Catholicism had been answered, I was still weighed down spiritually by shame and guilt — I didn’t feel worthy of God, to be in a relationship with him. For this problem no answer in a book, blog, or podcast would have been enough. I needed a concrete experience of Divine Mercy. I needed to do more than learn about God — I needed to encounter him personally.

“Eventually, I gave in and let down defenses,” he says. “I went to confession again for the first time in years, and I began going to eucharistic adoration. I experienced how Jesus Christ loves us through the sacraments and through the priesthood. At first, I thought this was just admiration, that I loved the priesthood as Christ’s gift to the church. However, over time I realized that I didn’t simply admire or appreciate the priesthood and the priests in my life — I desired the priesthood. I wanted it for myself.”

Trummer says he expected his desire to become a priest to disappear. However, that longing stayed with him. “It grew to the point that it outgrew my doubts and fears about pursuing the priesthood. I finally spoke to my priest about it. He confirmed my discernment and told me that I should call the diocesan vocation director and visit the seminary. I did both, and that started an adventure with the Lord for which I am overcome with gratitude. God is good!”

It’s natural to settle into one’s identity as a seminarian, Trummer says. “Of course, I was always looking forward to the priesthood and future ministry, but after the first year or two, the intense excitement and anticipation that marked my early discernment gave way to a more patient, steadfast fidelity. Every seminarian’s story and discernment are different, since Christ’s call to each of us is completely personal and intimate. For example, I know many men who experienced significant uncertainties and changes … and there’s nothing wrong with that. For others — myself included — we have the experience of saying that initial ‘yes’ to the Lord’s call and then, thanks to a special grace of God, we never really look back. 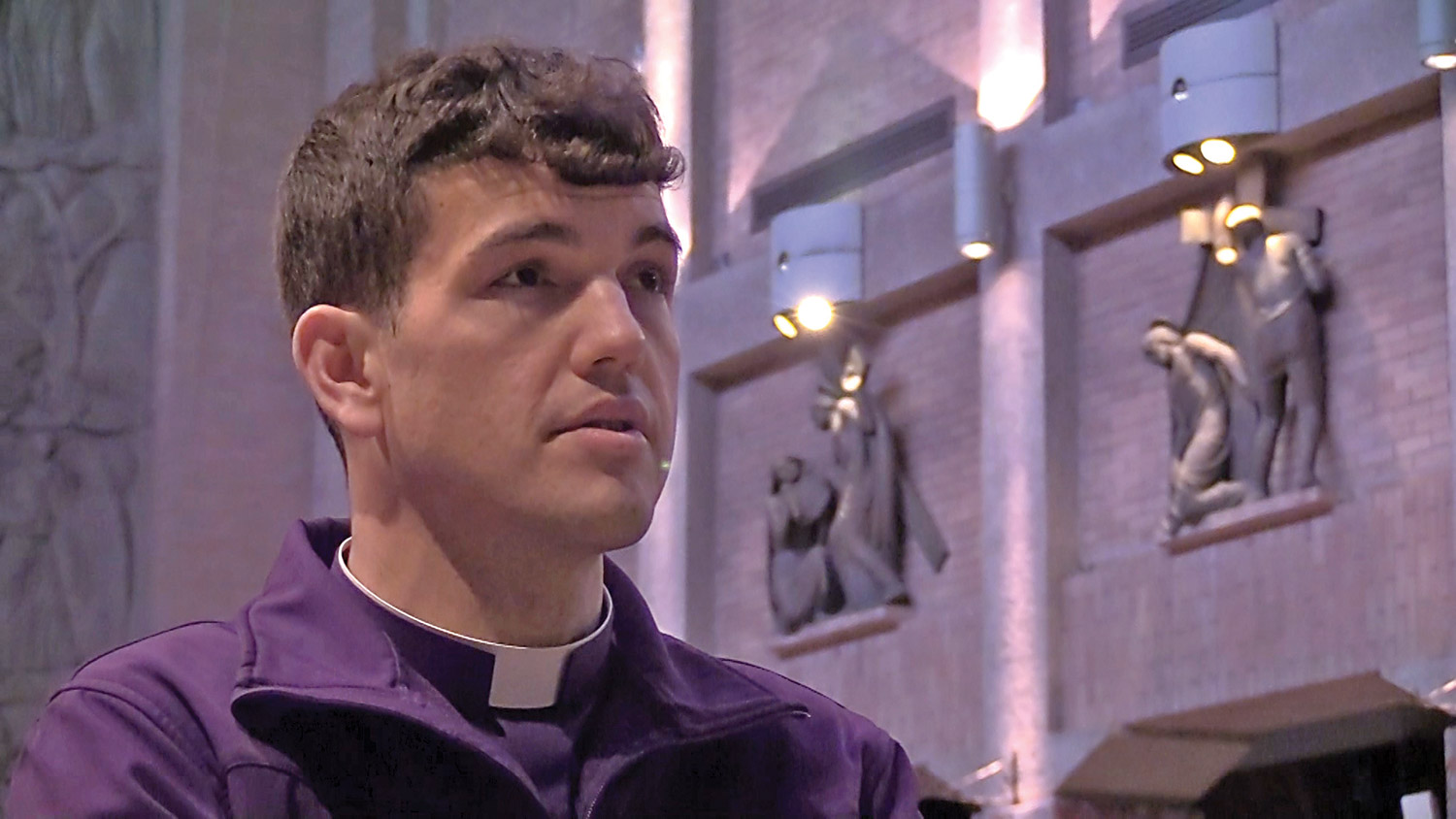 Chris Trummer, soon to be ordained a deacon, is shown kneeling in prayer in Rome, where he has been studying. 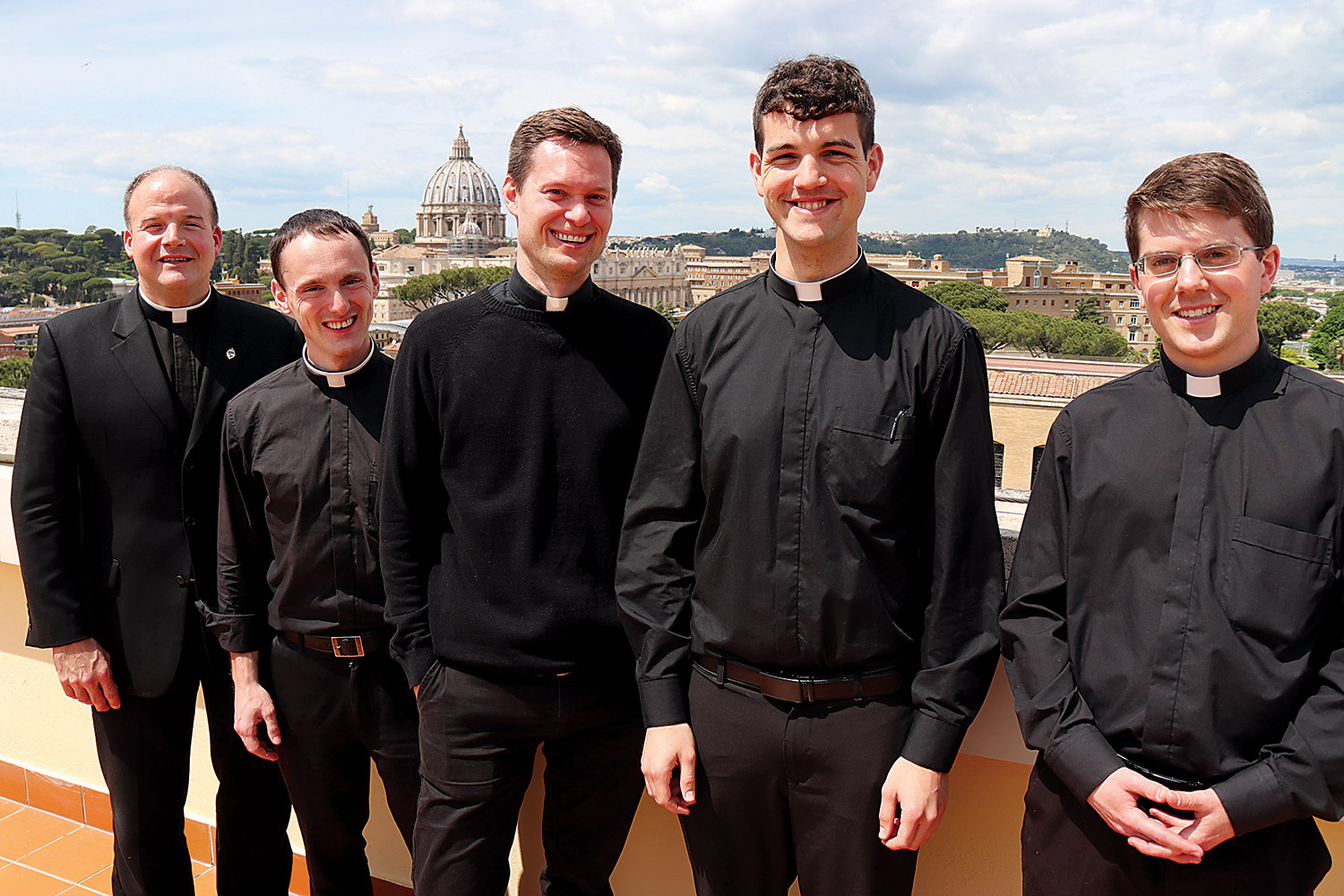 This 2019 picture shows Diocese of Springfield in Illinois priests and seminarians at the Pontifical North American College in Rome, which overlooks the Vatican. From left to right: Father Peter Harman, a Quincy native and rector of the Pontifical North American College; Father Dominic Rankin, who is now parochial vicar at the Cathedral of the Immaculate Conception in Springfield; Deacon Michael Berndt of Quincy; Chris Trummer; Grant Wilson of Morgan County. 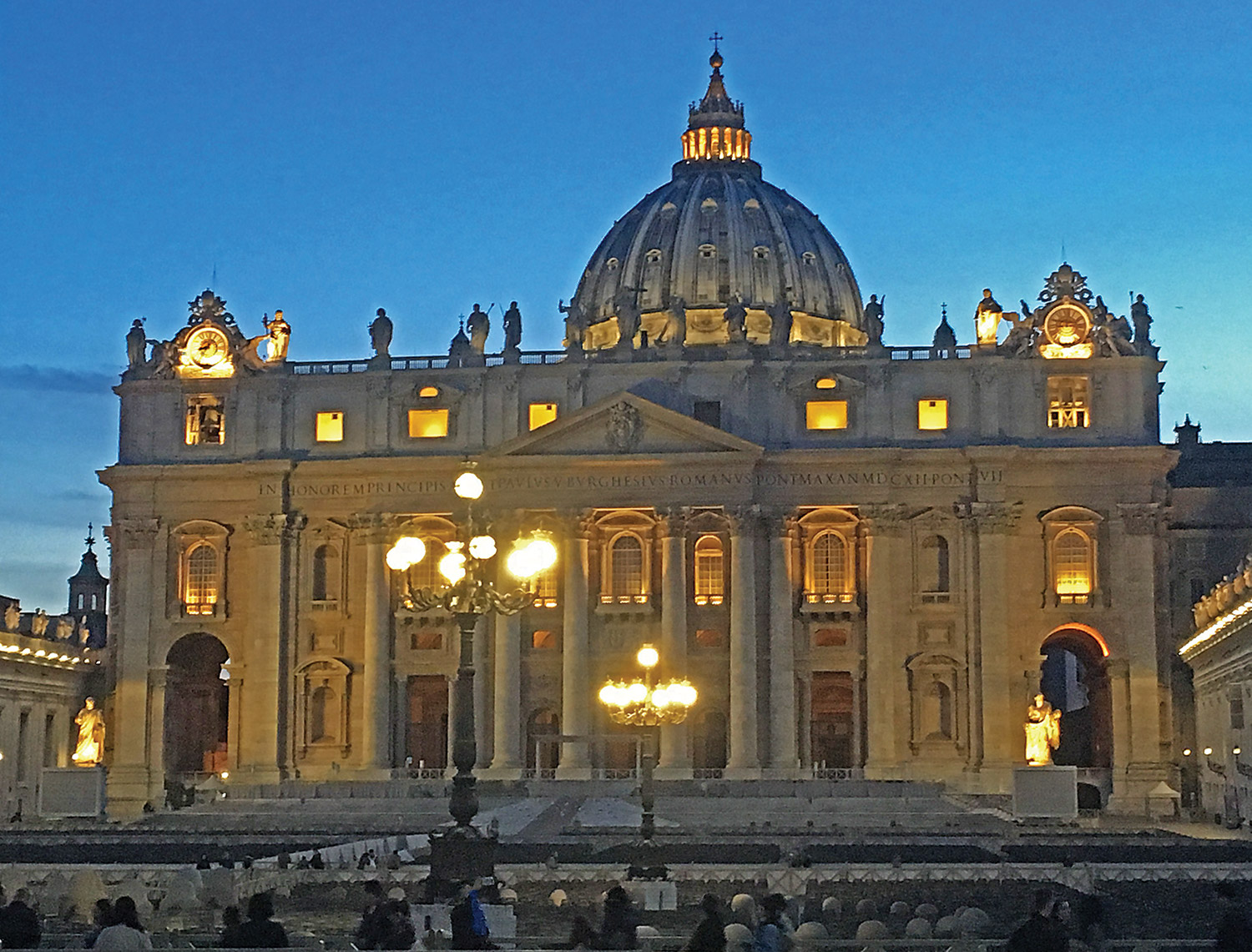 St. Peter’s Basilica is lit up just before nightfall in Rome. Trummer has been studying in Rome in preparation for the priesthood.

“Now that my diaconate ordination is so close, that same intensity I felt at the beginning and at other important milestones in my journey has been reawakened to the full. It is surprising, strange, and new, and yet it feels exactly right. In fact, that is how I would describe my experience of God’s grace in general.”

About his time in Rome, he says, “I will always be grateful for the experience of living and studying in the heart of the church, close to the Holy Father and surrounded by so many Apostles, martyrs, other saints. What I personally treasure is the unique experience of the universality of the church: I get to witness every day what it means for the church to be ‘one, holy, catholic, and apostolic.’ At my university (the Gregorian University), there are professors and students from over a hundred different countries, and we all come together to study the same faith that has been handed down over the centuries, originating from the Apostles and the lips of our Lord himself.”

When the coronavirus hit, Trummer’s studies, like so many others, were suddenly disrupted. “In early March, it was still unclear whether our universities would close. Eight days later, I was flying home. (He then was self-quarantined for the designated period of time.) A number of seminarians who are finishing formation and won’t be returning next year left without being able to say goodbye to everyone. There was little sense of closure. And yet, it was inspiring to see how the crisis united our seminarian community in prayer and commitment to the Lord.

“I was greatly encouraged by the return to God and community that has happened all over the world. Times like this, while dark and destructive in many ways, also reveal to us the true goodness and value of our lives, other people, and above all, the fidelity of our God who never abandons us. It is deeply moving and humbling to realize how critical the role of the priest is in times like these.”

Trummer, 29, often thinks about instructing others who are his age and younger. “To the young people of our diocese, especially those still trying to discern what to do with their lives, I would encourage them to stay close to God and the church. As Catholic Christians, the world does not define us or offer us lasting meaning and happiness — our identity and dignity come from the fact the God made us and loves us as his sons and daughters. To be a faithful Christian spouse and parent, a religious sister or brother, or priest is a truly radical way of life, one that offers far more than whatever the passing trends the world promises.”

Trummer has chosen his brother, Deacon Trummer, to vest him at his ordination. “Even though he is my younger brother, he is an inspiration to me as a disciple of Jesus Christ and as a man determined to serve God faithfully as a priest. We joined seminary at the same time and attended college seminary together for two-and-a-half years. Even though we attended different major seminaries, we have remained close and helped each other to grow over the years. I asked Michael to vest me as a gesture of gratitude, to express my appreciation for him and all the ways he has supported me in our shared vocation.”