Eight men to be ordained to priesthood ― biggest class since 1964

Eight men, representing a wide spectrum of ages and backgrounds, who come from different parts of the diocese and the globe, will make history in the coming weeks. That’s when they will be ordained priests at the Cathedral of the Immaculate Conception in Springfield by Bishop Thomas John Paprocki, making them the largest class of new priests in the diocese since 1964.

Over the past decade, the diocese has averaged about three men every ordination class, so eight this year is a huge jump. So what is happening in our diocese that is positively impacting men and opening their eyes to the priesthood? Vocations Director Father Brian Alford says a big part of it is the seminarians themselves.

“As the numbers continue to be strong, people throughout the diocese have more opportunities to actually interact with our seminarians,” Father Alford said. “Young men who see their joy, I believe, are attracted to that and the idea of a possible vocation to the priesthood does not seem so foreign. Bishop Paprocki has made vocations an important part of his ministry, and I think that is also a significant contributing factor. And of course, a lot of credit goes to our priests. They have really been a source of encouragement and inspiration to our seminarians. Nothing is more effective in promoting vocations to the priesthood than for young men to see priests that love their ministry and are fulfilled in the service to which the Lord has called them.” 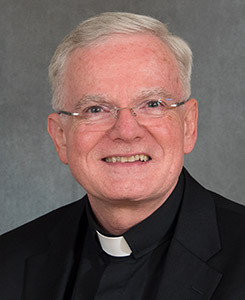 At 63 years old, Deacon David Beagles isn’t your typical vocation to the priesthood. Spending most of his life living in Springfield and working in state government, Beagles’ home parish is the Cathedral of the Immaculate Conception. His first assignment will be St. Francis Solanus Parish in Quincy.

“My journey toward priesthood at my age has been a study in God’s abiding mercy and steadfast goodness, often shown through the prayerful support and example of family and friends, especially my parents,” Deacon Beagles said. “The formal formation (seminary) journey has been a tremendous growth experience in God’s compassion, and a swiftly-passing time of wonderful learning in the realm of the four pillars: the spiritual, intellectual, human and pastoral. I have especially learned God longs for a true relationship with each of us.”

Deacon Beagles says he wants to promote Christ-centered values in our modern world and can’t wait to get started.

“I am looking forward to humbly serving God’s people; celebrating the Holy Sacrifice of the Mass, including preaching the Good News of Our Lord’s life, death, and resurrection, and most of all — his loving mercy,” he said. “I hope, also, to promote the profound gift we have in our loving Blessed Mother, including in her most holy rosary.” 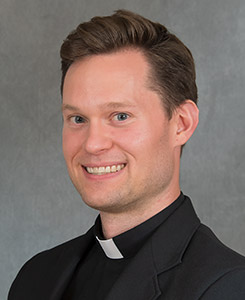 After studying among the saints in Rome for several years at the Pontifical North American College in Rome, Deacon Michael Berndt is ecstatic to begin his priestly vocation at Christ the King Parish in Springfield. When asked to summarize his journey, he said it is “serendipitous — finding joy where it is not sought.”

“For my part, all I do is say ‘yes’ to the opportunities that arise — it is not complicated, but it can be difficult at times,” Deacon Berndt said. “First, the ‘yes’ to the priestly vocation after (somewhat) avoiding it from the ages of 18-26, and since joining the seminary, it has been an adventure. Not knowing what is around the corner is exciting for me. God has a magnificent capacity to surprise, and he has been so good to me.”

Deacon Berndt grew up in Chicago, graduating from Quincy University in 2010. After working in the secular world for many years, he heard God’s call. He says he is most looking forward to being with the people.

“Helping them see that they are loved by God and helping them to return that love simply by being with them, knowing their stories, lending an ear, learning from them, having good conversations, teaching, preaching, enjoying meals together, experiencing ordinary encounters on the street, and perhaps most especially through the celebration of the sacraments,” he said. 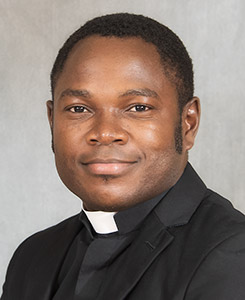 Growing up in Nigeria, Deacon Peter Chineke’s road to the United States and our diocese is simply providential. Deacon Chineke says it was after secondary school in his home country that he began to discern a vocation to the priesthood. He first joined a religious community in Nigeria in 2010. Two years later, he went to the Philippines to continue religious life and seminary formation as a missionary. He says that “divine providence” brought him to the Diocese of Springfield in Illinois.

“My journey to the priesthood has been one of grace and wonderment,” Deacon Chineke said. “Judging by human standards and otherworldly privileges, I do not deserve the joy and blessings that characterize my life all these years.”

Deacon Chineke now calls Blessed Sacrament in Springfield his home parish. His first assignment will be at Cathedral of the Immaculate Conception in Springfield.

“I’m looking forward to journeying with people as a father and a friend and celebrating the sacraments for them and with them,” he said. “The privilege to sit at the confessional, celebrate baptisms and marriages, visit and anoint the sick and the senior citizens, and celebrate the holy Eucharist is a blessing I am eagerly looking forward to.” 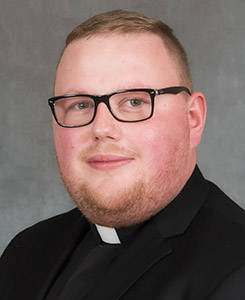 Deacon Piotr Kosk grew up in Poland. He attended seminary in Warsaw immediately after high school. Originally, he was designated to be an army chaplain as he grew up in a military family. But the Holy Spirit had other plans.

“In 2016, at the urging of a bishop from the United States, I came to Chicago, where I spent a year learning English,” Deacon Kosk said. “A year later, I continued my studies at the Cyril and Methodius Seminary in Orchard Lake, Mich. The time of my preparation was wonderful; it allowed me to develop intellectually, spiritually, and as a human. Over the past seven years I have met wonderful people, I have good friends all over the world and definitely in every corner of the United States. Despite the fact that my family lives in Europe, there are loving people for whom I am a son or brother in the United States.”

Deacon Kosk now calls Our Lady of the Holy Spirit in Mt. Zion his home parish. He says he knows being a priest will not be easy, but he believes that he was chosen by God to be a priest. His first assignment will be at St. Paul Parish in Highland.

“I want to be a priest who will be led by the Holy Spirit,” he said. “As a man, I am weak and sinful but with God I can move mountains. I would like everyone who meets me to say that God is upon me and that I am a good shepherd.” 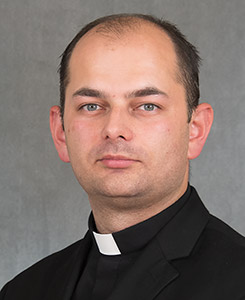 Deacon Pawel Luczak hails from Warsaw, Poland. Little did Deacon Luczak know that God had an international plan for him.

“I would say it was long spiritual journey where I was traveling through ‘deserted places and fruitful lands,’ but my journey is not completed,” Deacon Luczak said. “I just finished one of its stages, and I am looking forward to being on track of fulfilling God’s way.”

St. Anthony of Padua in Quincy is Deacon Luczak’s home parish. His first assignment will be St. Peter Parish in Quincy. He says he wants to bring people to Christ and sanctify his own life through filling his vocation to the priesthood.

“For me it is about building a personal relationship with Christ,” he said. “I want to be close to him — as close as possible — and I want to share and lead others to that relationship.” 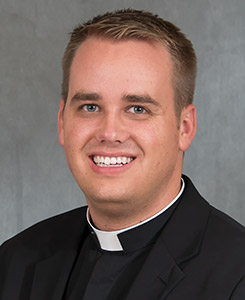 The priesthood was on the heart of Deacon Michael Meinhart from a young age. Just after graduating from Teutopolis High School in 2012, he entered the seminary right away.

“When I entered seminary eight years ago, a priest gave me these wise words: ‘The days will be long, but the years will fly by.’ That has been so true in my experience,” Deacon Meinhart said. “Formation for the priesthood has been long — eight years — but it has also been a joy that has flown by. I have enjoyed coming to know God, myself, and my church in a deeper way through it all.”

Deacon Meinhart calls St. Isidore the Farmer in Dieterich his home parish. His first assignment will be St. Boniface Parish in Edwardsville.

“I am really looking forward to full-time ministry in a parish with the people of God,” he said. “The parish has been the most life-giving place for me throughout the years of seminary formation, and I am looking forward to being assigned somewhere within the diocese full time. I will be able to enter into the rhythm of parish life and will stay far beyond August when the academic year begins again. It is in the parish that priests get to live life with their people.” 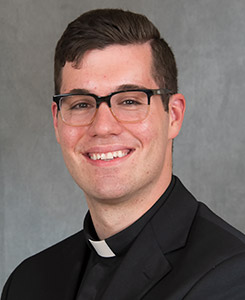 Growing up in Neoga in Cumberland County, Deacon Michael Trummer was interested in science, nutrition, and video production. While at Eastern Illinois University, Deacon Trummer left campus and studying chemistry and joined the seminary.

A parishioner of St. Mary the Assumption in Neoga, Deacon Trummer’s first assignment will be Our Lady of Lourdes Parish and St. Thomas the Apostle Parish, both in Decatur.

“I am looking forward to being able to celebrate the sacraments, especially confession and the Eucharist,” he said. “I am also excited to do that in the context of a parish. It will be life-giving to get more invested in the lives of the families of a parish, but to do both together is something I know will be tremendously life-giving. I have yet to have the experience of being invested and surrounded in a parish full-time, apart from a few summers. As a priest, I will have the opportunity to get to know parishioners even more, and I will do so as a spiritual father.”

Deacon Trummer’s brother, Chris, will be ordained a deacon the same day Michael is ordained a priest, June 19. 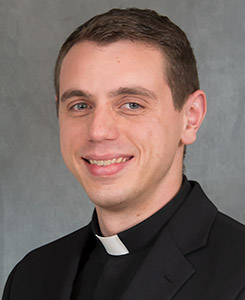 Deacon Dominic Vahling knew he wanted to be a priest from a young age. After graduating from Teutopolis High School, he went straight into the seminary.

“I have grown and matured a lot in the past eight years, and some school years seemed longer than others,” Deacon Vahling said. “However, it seems like each year in seminary has been even better and more joyful, as I grew closer to God and got a better picture of what ministry looks like.”

Deacon Vahling, a member of St. Francis of Assisi Parish in Teutopolis, will soon call Cathedral of the Immaculate Conception home for his first assignment.