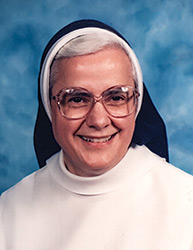 Sister Maria was a gentle, guiding presence for students, faculty, and families alike at three Springfield Dominican high schools. At Sacred Heart Academy (now Sacred Heart-Griffin High School), she taught English and theology, 1960 to 1967, and was in charge of the girls who were boarders at Siena Hall, 1963 to 1967. Sister Maria was also an assistant principal and principal, taught English, and served as guidance counselor, 1975 to 1986. She was a principal at Rosary High School, Aurora, 1969 to 1975, and dean of students, 1989 to 1991. At Marian Catholic, Chicago Heights, she was college registrar, 1993 to 2004.

In later years, she provided pastoral care at St. Dominic Hospital, Jackson, Miss., and at Villa Vianney in Sherman. In 2004, she returned to Sacred Heart Convent where for many years she was secretary for the motherhouse prioress and served as a driver for the sisters until 2015.

Sister Maria was preceded in death by her parents; her brother, Carl “Jack” Eck; and her sister, Marilyn Mason. She is mourned by many former students, friends, nieces, nephews, and dear cousins, including Sister John Vianney Rudolph, OP, who cared for her lovingly in her final months.

Private burial was held at Calvary Cemetery on July 7. A Memorial Mass will be held at Sacred Heart Convent at a later date. Donations may be made to the Dominican Sisters Retirement Fund, 1237 W. Monroe St., Springfield, IL 62704.

The Dominican Sisters and family of Sister Maria were served by Butler Funeral Home–Springfield.