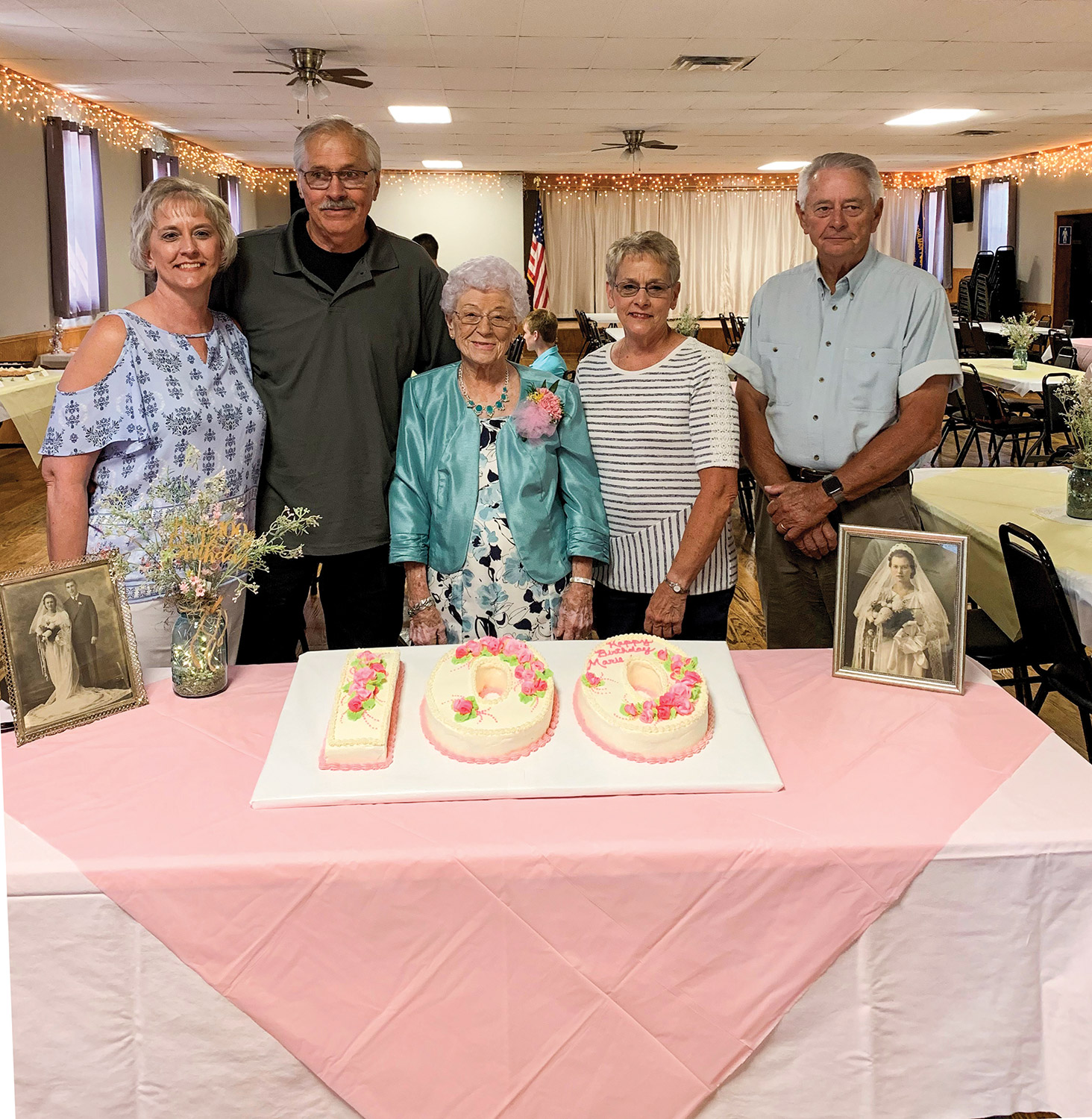 BRUSSELS — Last year, when Sarah Kinder was taking then 99-year-old Marie Held home after Saturday evening Mass at St. Mary Church in Brussels, Held made a special request. “Marie lives across the street from me. Her mother and my grandmother were sisters,” Kinder explains. “One night she said, ‘If I live to be 100, check to see if the Mass on that Saturday is available for me.’”

Happily, Held’s request was fulfilled on July 18, just two days before she celebrated her 100th birthday. Held was not only recognized at Mass that evening by her pastor, Father Don Roberts, but was also the guest of honor at a party held at the Brussels Legion Hall, where she had not one, but three birthday cakes, to share with well-wishers.

Bishop Thomas John Paprocki sent birthday greetings to Held. Emily Fortschneider, mayor of Brussels, declared a proclamation designating July 20, 2020 as Marie Held Appreciation Day. “The proclamation was a big surprise for Marie, but well-deserved,” says Kinder, who is office manager for Blessed Trinity Parish. “She was also overjoyed to receive a letter from the bishop.”

Held has been celebrating now that she is 100 years old, but her early life was difficult as she grew up with a single mother who struggled to get by. She was born in Golden Eagle, in a little brick farmhouse that is still standing today. When she was just 10 days old her father Louis Mossman died suddenly, leaving her mother Mary Horman Mossman with a tiny infant, a son, Frank, who was 5 years old and a daughter, Bernice, who was 3 years old. 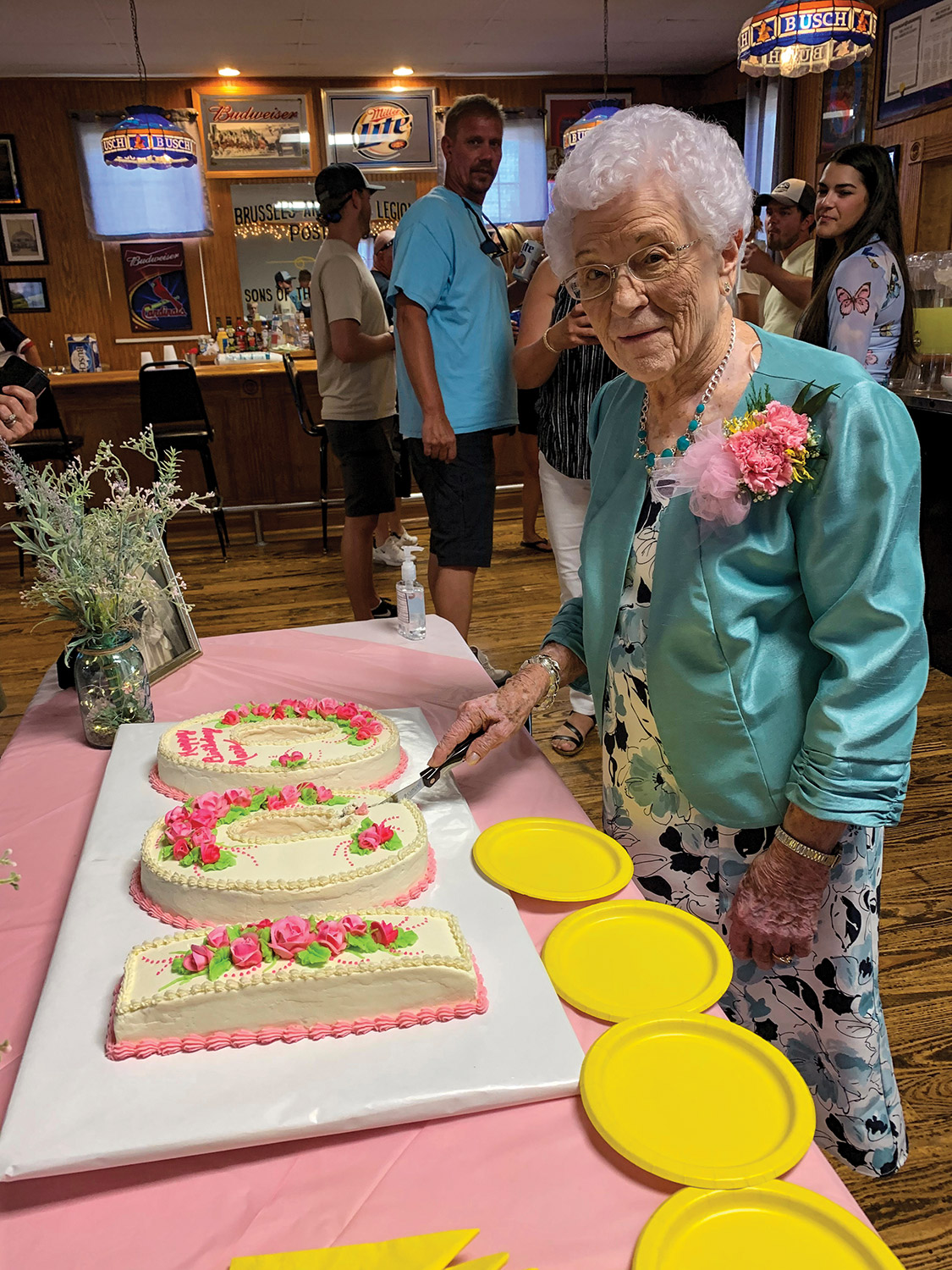 “My father was putting up hay when he died. My mother was still in bed recovering from childbirth and she was left alone with a brand-new baby and two other small children,” Held explains. “In those days, there wasn’t financial help available for single mothers. Of course, we had no electricity and no indoor plumbing.” Over the years Mary Mossman took many different jobs to support her children.

Held explains that the family moved many times and she attended different schools. “Then I went to live with the nuns at St. Mary’s in Brussels,” she says. “They were Sisters of Divine Providence and there were six children there. We slept in the attic and they took care of us and prepared us for first Communion.”

Young Marie made her first Communion, finished grade school, and went on to graduate from Brussels Community High School. She worked at the WPA library and at John Held’s store and restaurant until she married Robert “Bob” Held on Nov. 23, 1939. The wedding took place at St. Mary Church in Brussels with Father H.B. Schnelton officiating.

“Our first home was in Wood River and we lived there for five years,” Held says. “Bob worked at the Western Cartridge Company making high explosives for the war. Our son, Bob, was born in Wood River. We moved to Brussels in 1945 so that Bob could go to St. Mary’s School.” The family went on to have three more children: Sharon Held McLeod, James Held, and Barbara Held Ward.

In 1951, relatives helped the young couple build their house in Brussels — the same home where Marie Held lives today. Her son, a retired dentist, lives next door. Bob and Marie owned the Shell gas and service station in their hometown and Bob also drove the school bus for 35 years. Marie cared for their children and worked alongside her husband. “I pumped gas and filled tires,” she says. 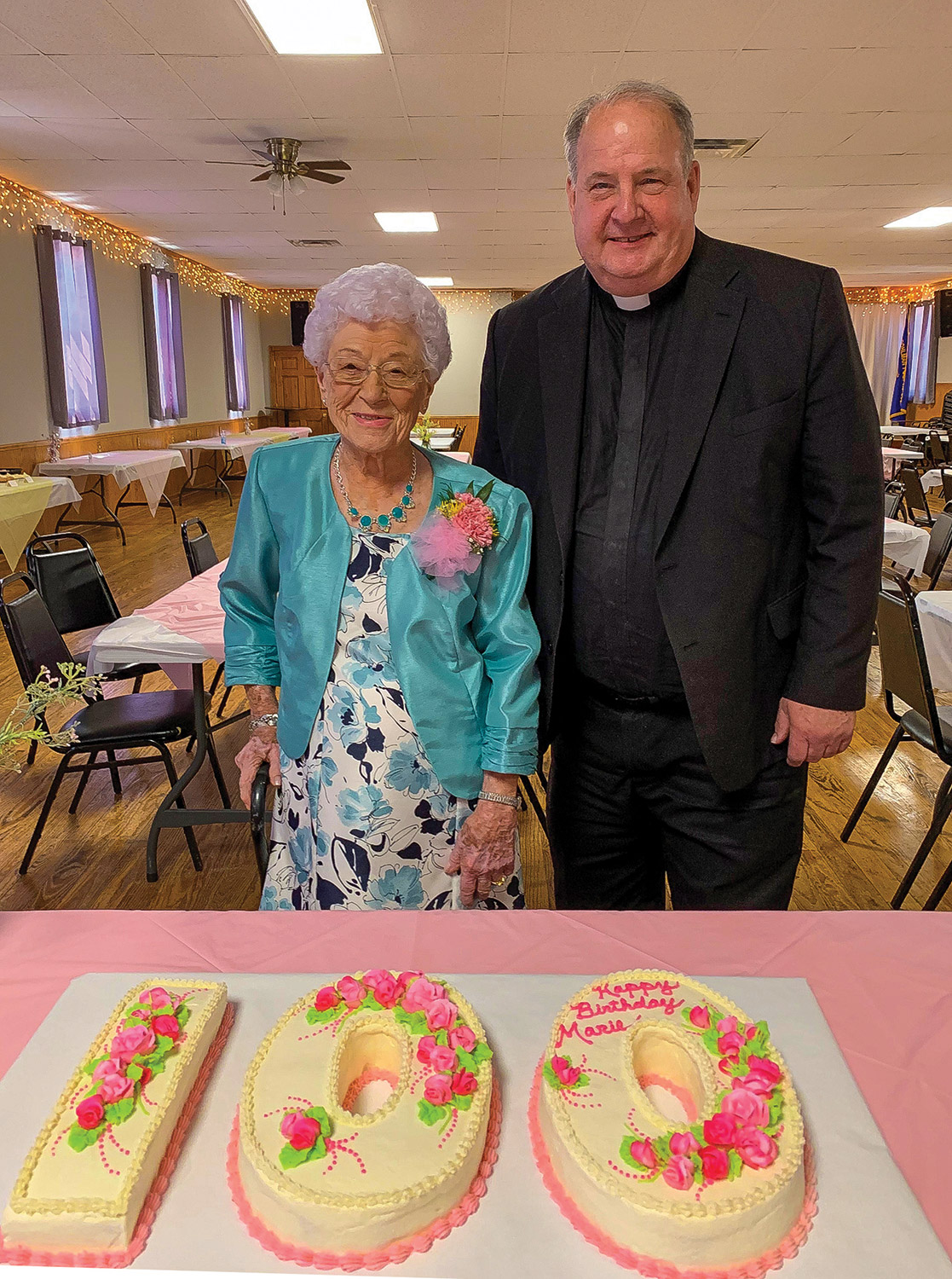 Bob Held died on May 30, 1988, leaving Marie a widow for the past 32 years. However, no matter what life has thrown her way, she has been faithful to God and her family. She now has 10 grandchildren, 19 great-grandchildren and two great-great-grandchildren. Many of those family members were home on the weekend of July 18-19, to help celebrate her special birthday.

Held says she believes her long life is a result of “a strong faith, the love of family and friends, and a healthy lifestyle.” She was the sacristan for her church for many years, washing church linens. She made meals for the local priests, worked on the parish picnics, and is a 75-year member of the Altar Society. She has some household help now and walks with a cane, but still does a few of her own chores.

“I know that I wouldn’t be able to live here by myself if I didn’t have my son Bob, and my daughter-in-law Bonnie living right next door — and I have so many people who check on me,” Held says. “I don’t know. Some days are long and sometimes the weeks just fly by.”

Held describes herself as “soft-hearted” and adds, “I have to cry about everything.” She gets up early every day to pray the rosary and attend Mass via EWTN. “Lately they have been praying a second rosary after Mass, for the end of the virus,” she says. “Since the church has been reopened, I have gone back to going to Mass on Saturday nights. I just go into church and sit up there in the first pew.”

“As a widow of over 30 years, her two sons and her two daughters and their extended families are the most important part of her life, after her faith in God. She is a very modest, simple, devoted woman, and was deserving of the recognition now that her prayers were answered to see 100,” concludes Kinder. “Marie is truly an inspiration to all of us, and I am happy to call her my neighbor, a relative and my mentor.”