Puppy love: A dog can be priest’s best friend

Three priests, three lucky dogs and an abundance of puppy love — could it get any better? Let’s take a look at the men who make a great case for priests having pets: Msgr. Leo Enlow, with his German Shepherd mix Abbie; Father Joseph Havrilka, with his mixed-breed Boško; and Father Steven Arisman, with his Dachshund Bella. 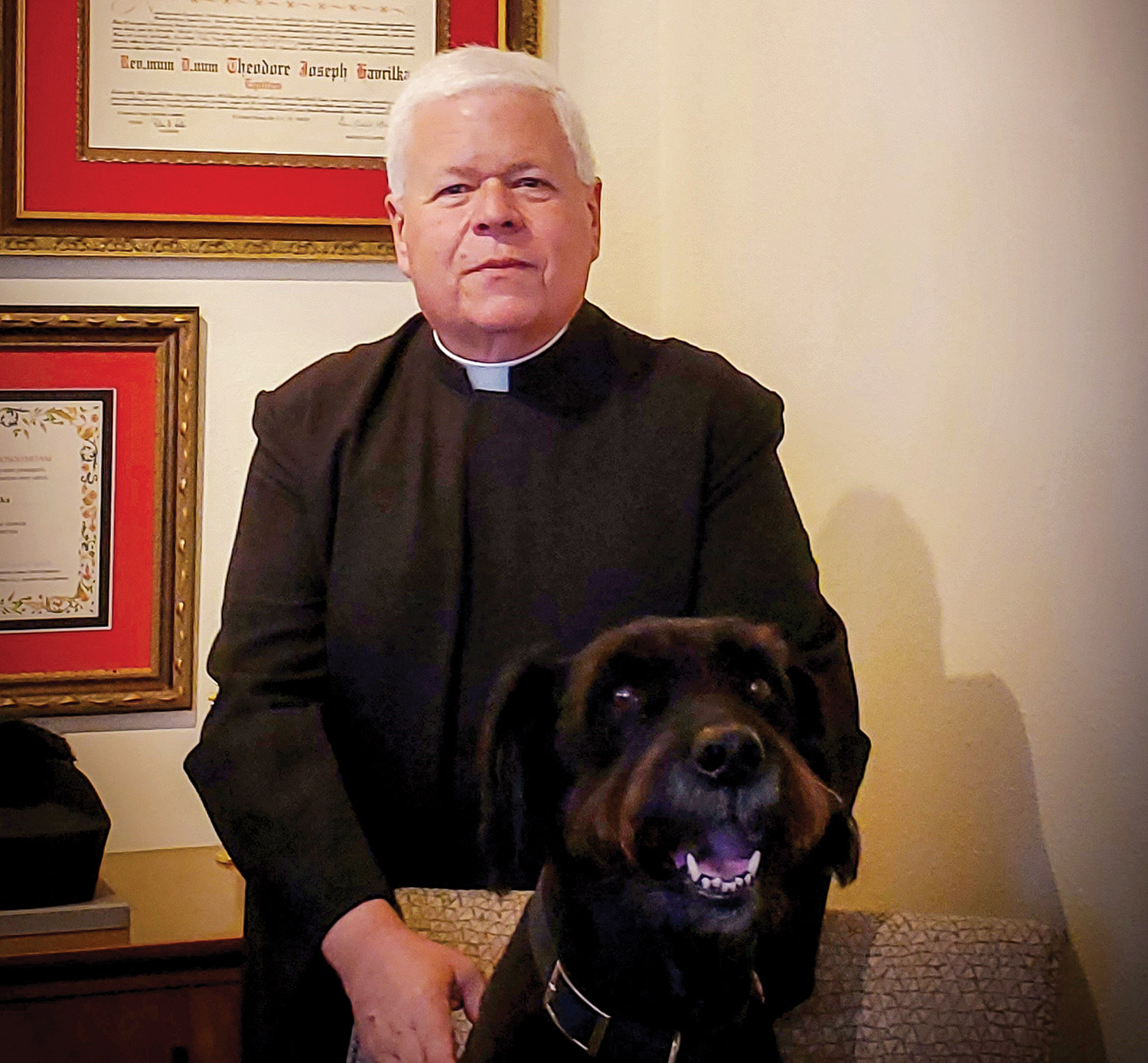 Msgr. Enlow, Father Havrilka and Father Arisman have all adopted their current dogs from difficult situations. All three men took a chance on a dog that had been neglected, abandoned, or otherwise abused.

For example, a few months after Msgr. Enlow, pastor of St. Peter in Quincy, lost his beloved German Shepherd, Molly, someone from the animal shelter called to say another German Shepherd was available. “This was a rescue dog as the owner was about to shoot her,” he remembers. “So when I heard this I decided to adopt her.”

“I have had Boško for 11-and-a-half years,” says Father Havrilka, pastor of St. Clare in Altamont, St. Anne in Edgewood, and St. Mary in St. Elmo. “I adopted him from the Clinton County Humane Society. He was rescued from a dog hoarder and rehabilitated by a great couple from Bartelso. It was a serious commitment. When I adopted Boško, I agreed to provide him with everything he needed to thrive post-abuse.”

Finally, Father Arisman, new pastor of St. Francis Solanus in Quincy, found Bella through a former parishioner. “One of my younger parishioners, Megan, worked at a vet clinic in Arthur. She messaged me about an all-black Dachshund that an Amish family brought in to evaluate to see if she could have more puppies. When they found out she couldn’t have any more puppies they were going to take her home and put her down because she was just a puppy mill to them. She’d had five litters.

“(At the vet) they asked if they could give her to someone and so the owners left her behind,” Father Arisman says. “She was only 5 years old. She was in terrible shape and terribly cared for and later I figured out that she had been kicked a lot. She had ringworm, terrible skin, a hernia, terrible teeth, she was overweight, and couldn’t walk, literally dragging her back legs.”

Bella was treated by a “doggie chiropractor” who didn’t charge Father Arisman, “because he was a priest and took a dog most would have put down.” She had other big ailments fixed in surgery and was spayed. “Bella has now been in such great health. She loves anytime with me and attention, period. She enjoys running around her old and now new fenced-in areas. She loves to hate and bark at and chase squirrels and loves to chase bunnies, although she never wants to catch them, just chase them. She’ll let them go if she catches one, and then continue to chase it.” 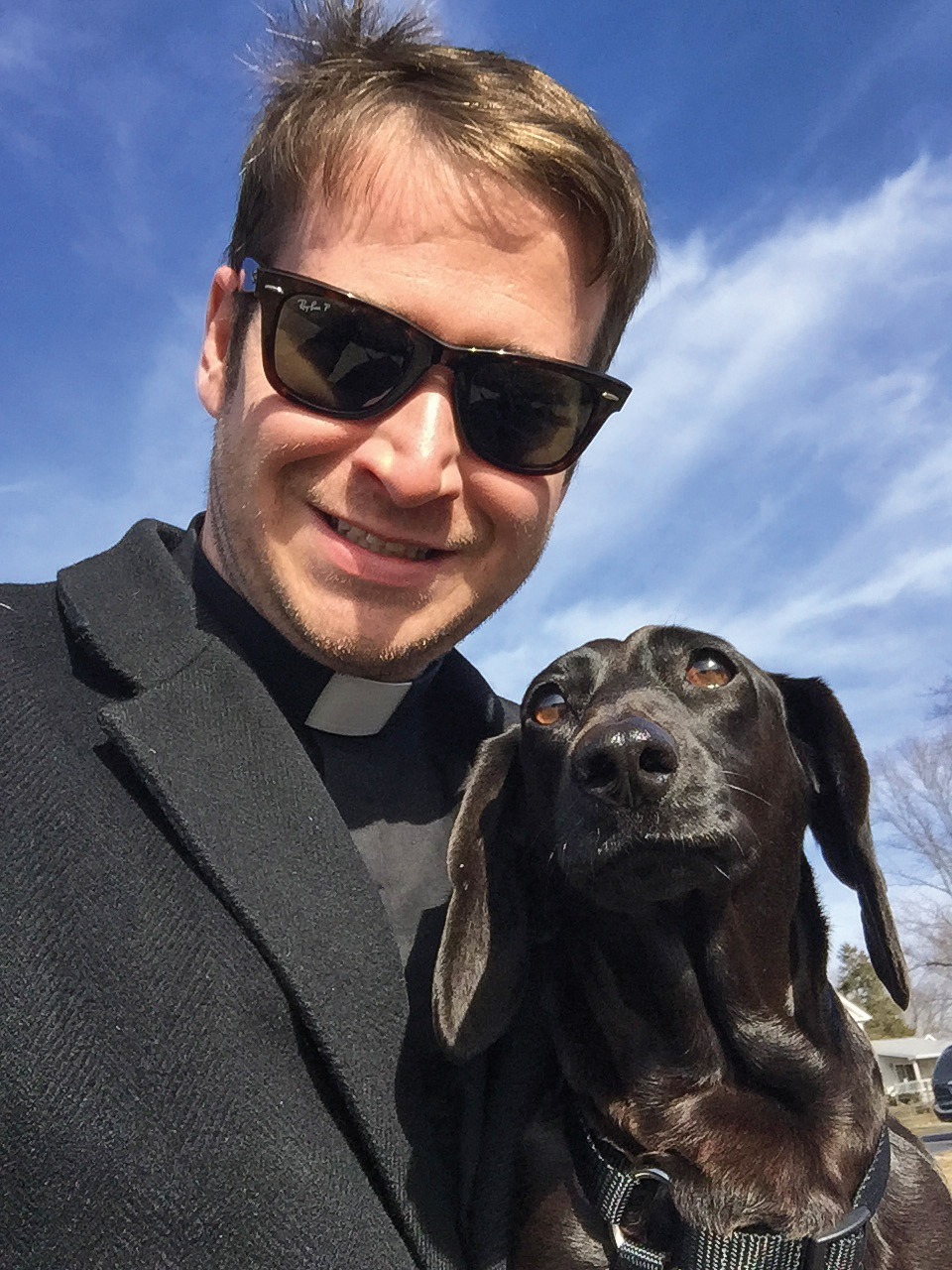 As most people know, dogs in general are very treat-driven and they like the person who provides the food, no matter who is giving it to them. “Abbie does not have that protective trait, but I’m told that she had to be she would respond, but I doubt it,” Msgr. Enlow says. “All somebody would have to do is give her a treat and she would be a friend forever.”

“When Father Piotr Kosk lived with me during breaks and during COVID time, he loved having Bella around and she loved him. Sometimes I joked that she liked him more,” adds Father Arisman, who is Msgr. Enlow’s nephew. “Maybe because he gave her more treats than I did, though!”

Getting by with a little help from friends

Because priests have unusual schedules, sometimes family and friends step in to “dog sit” or help out when needed. “Bella loves my mom and dad and spending time with them as they watch her when I have meetings in Springfield or when I’m gone for any period of time,” says Father Arisman. “They love having her when they do, but also love not always having a dog.”

“It is a serious commitment to provide the necessary care for one’s dog,” says Father Havrilka. “You must have dependable, responsible dog-sitters. Our schedules can be so out-of-the-norm and it is imperative that our pets receive everything they need to live a full life.”

Msgr. Enlow believes not every priest has the patience nor the time to have a pet. “Having a dog also ties you down, sometimes limits you. They take time and effort, but I find they are worth it for me. Fortunately for me, my staff has always been very helpful in taking care of my dogs. In fact, I’m very grateful to them and thankful that they all have seemed to enjoy my pets. In the evenings and on weekends, it’s fortunate that I’ve had parochial vicars who also enjoyed a pet so that they helped care for them while I was away. I suppose if I was gone for a while, I might have to board them, but as of today that has never been the case.” 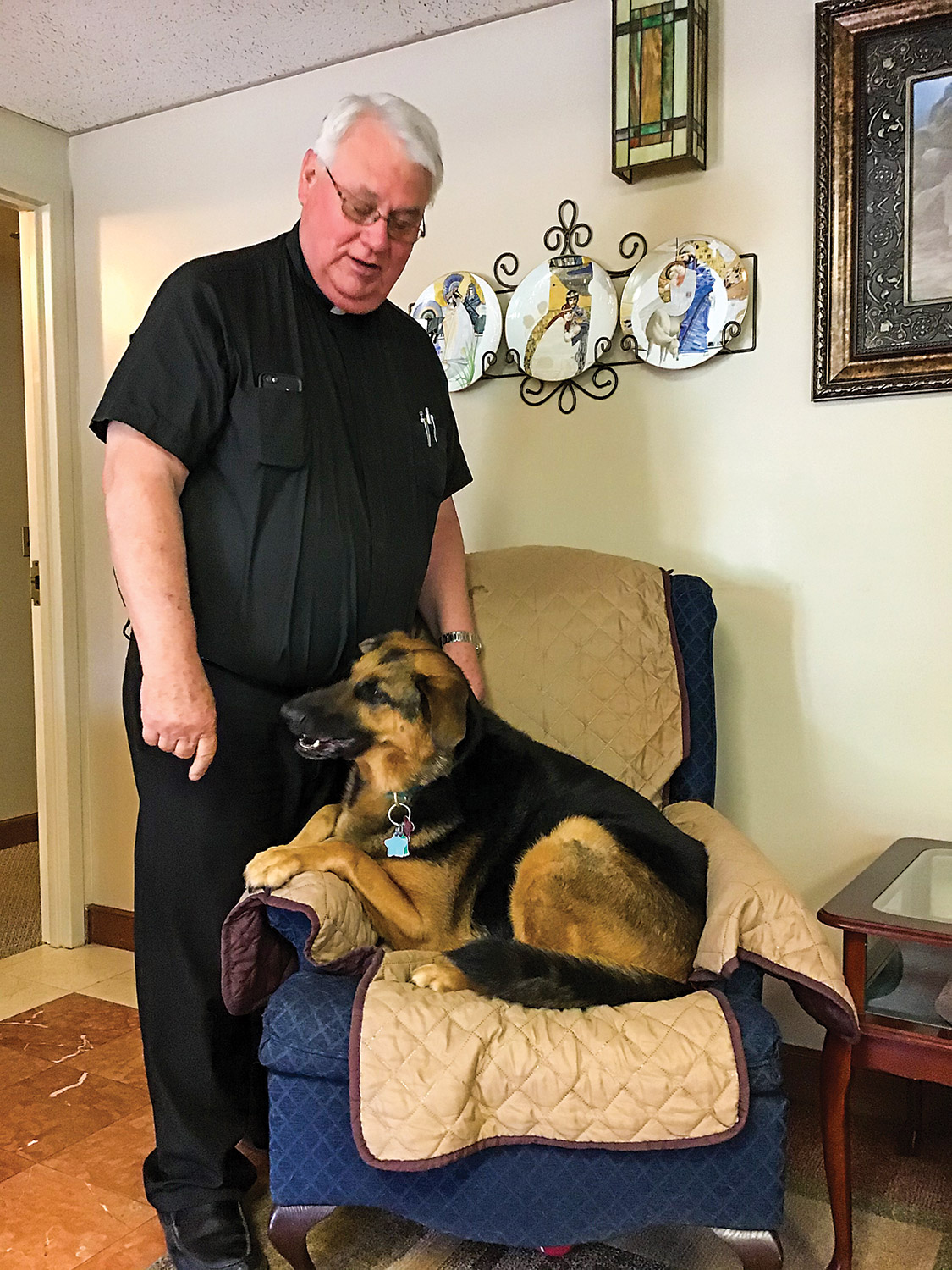 In general, the three priests agree that parishioners and parish staff members tend to like having their priest’s dog around — particularly if the rectory has never before accommodated a pet. The dogs seem to adapt well, even when they sometimes must move to different places.

“I’m amazed at how well he has adapted with each move, I have found that providing him with a consistent schedule, as much as possible, and allowing him to explore the parish grounds helps. The parishioners seem to enjoy him when they meet him,” says Father Havrilka. “So far, everyone has taken to Boško and seem to enjoy their encounters with him. I am blessed that does not jump, bark or have any other aggressive tendencies. In other words, I don’t think he would protect me from harm. He’s much too nice for that!”

“Bella has been a huge bonus coming to St. Francis Solanus here in Quincy. Not only does she break the ice with everyone, but the people at the parish here have been excited to have a pastor with a dog,” says Father Arisman. “The whole Franciscan love for dogs has really been a boost for connecting easily. Our awesome volunteer group, Austin’s Army, even put up a fence for her right away. I’m so grateful to them and it’s not only made me feel so welcome, but it’s made her adjustment to the move even easier and my life easier.

“My wonderful new staff has really taken to her and she loves them,” says Father Arisman, who until very recently served in the Decatur/Bethany/Mt. Zion areas. “Kids and adults both love her. She attracts people. She calms people down that are sad and grieving. She’s helped me make break-throughs in conversations helping people. My parishioners have all loved her and loved having her come over and come to things. She was especially great with my youth group, my high school, the students and staff at St. Teresa, and with my college students at Millikin.”

“As far as parishioners, the kids in our school and in our parish have loved my pets,” Msgr. Enlow says. “I suppose some tolerate them but over all they have been very receptive to me having them.”

There is so much to be thankful for

Sometimes it is hard to put the love of a pet into words, but when it comes Boško, Bella and Abbie, their owners don’t hesitate to tell people how they feel about their special four-legged buddies.

“Boško has not only be a loyal loving companion, but also a motivation for me to get regular exercise. Even though he suffers from arthritis, he still gives it his best and enjoys our twice-daily walks. I have no regrets about Boško,” Father Havrilka says. “Will I get a replacement when his time is up? I doubt it. He has spoiled me as much as I’ve spoiled him!”

“I love watching people light up when they encounter this cute pup. She’s such a gift from God and a joy to have around,” Father Arisman says.

Msgr. Enlow says as a priest he has had several dogs, and he is thankful for Abbie and for those unique pets that he holds in his memory. There were many good times and a few sad ones, too. When he lost his previous German Shepherd, Molly, he admits, “It was a very sad day in my life.” Still, after being without a dog for a few months, he was ready to share his life with yet another pet. No doubt, Molly would have understood.

“Dogs are so loyal to you,” Msgr. Enlow concludes. “In terms of unconditional love, they exhibit it to you on so many levels. Plus, they are always there to listen to you, good and bad, and never respond negatively. What I like about dogs is the companionship they provide. It’s like having a friend forever. I’m just so thankful that I have a dog.”