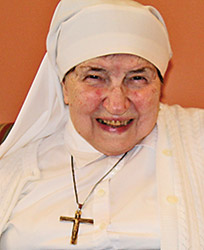 ST. LOUIS — Sister Miriam Teresa Graczak, OSU, died peacefully on Aug. 25 at St. Andrew’s at Francis Place in Eureka, Mo. She served many years in the Diocese of Springfield in Illinois.

She was born June 30, 1929, in Ellisville, Mo., to Alice and Joseph Graczak. She entered the Ursulines in 1947 and professed her vows in 1952. She earned a bachelor’s degree in music from Xavier University in New Orleans.

A longtime teacher, Sister Miriam Teresa taught elementary grades at Ss. Peter and Paul School in Alton from 1961 to 1962 and at St. Bernard’s School in Wood River from 1965 to 1976. She taught music at the elementary level at Ursuline Academy in New Orleans from 1978 to 1985 and at the academy’s high school from 1986 to 1996. After retiring from teaching, she remained in New Orleans until 2005, providing service to the local Ursuline community. Following Hurricane Katrina, she rejoined the Ursuline community in Alton until her 2018 move to Francis Place.

A short prayer service and burial took place Aug. 28 at St. Peter’s Cemetery in Kirkwood, Mo. A memorial Mass will be celebrated later.