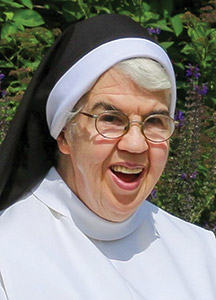 Sister Mary Regina Berkel, OP, 79, of Springfield, passed away on Sept. 14 at HSHS St. John’s Hospital. She was born May 15, 1941, in Queen’s Lake Memphis, the daughter of George F. and Irene Elizabeth (Farthing) Berkel who preceded her in death.

At the age of 21, she entered the Dominican Monastery in Catonsville, Md. Her religious profession was on Oct. 25, 1964.

She was an expert at crocheting lovely afghans, throws, shawls and other fancy work.

Sister Mary Regina is survived by her brother, George Berkel, and many nieces and nephews.

A funeral Mass was celebrated on Sept. 18, at Monastery of Mary the Queen in Girard, with Father Clinton Honkomp, OP, celebrating and Father Dominic Rankin concelebrating. Burial followed at St. Martin Cemetery in Farmersville.