ROCHELLE — Father Ryan McDaniel, a priest who occasionally offers ministerial services at Eastern Illinois University’s (EIU) Newman Center, St. Charles Borromeo Parish in Charleston, and teaches at EIU’s Catholic Scholars Program, received high praise for his role in the fight against COVID-19, serving as a Catholic chaplain for troops in the Illinois National Guard. Father McDaniel (Ch, Capt) and his Religious Affairs Specialist, Specialist (SPC) Brian Neice, were recently commended for their service to troops supporting multi-agency operations at a 330,000-square-foot warehouse in Rochelle, where the state is storing emergency supplies related to the COVID-19 response and other Federal Emergency Management Agency related resources. 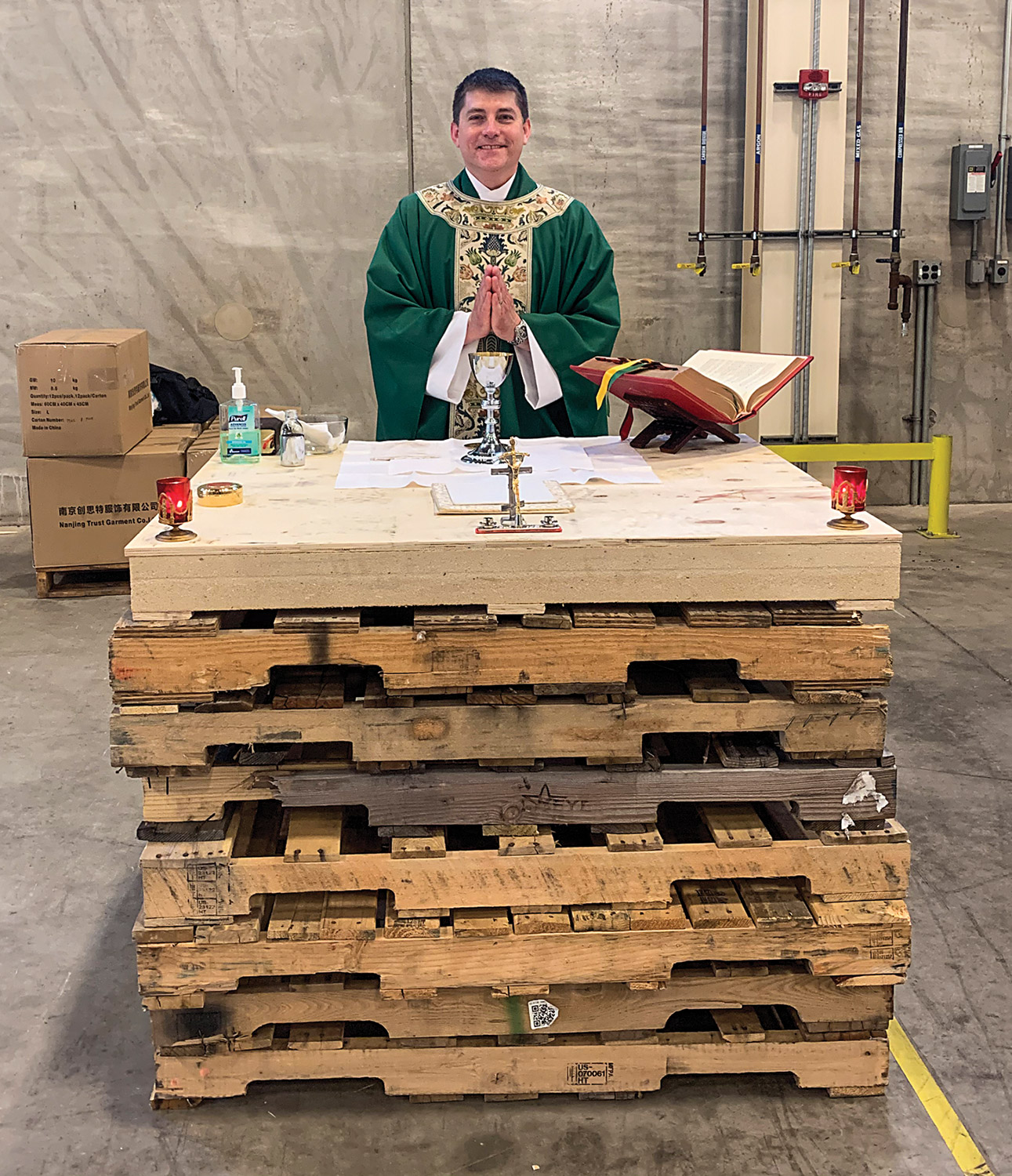 “I am writing this email in regards to Ch McDaniel and SPC Neice. They were the team assigned to TM Rochelle. I was very impressed with the dedication and support of this team, to the welfare of my soldiers. The duo didn’t just show up, look around, ask some questions and leave. I was surprised. I have been in the service for 30 years, and it is very rare to see the Chaplain mingle with the troops, play some games, and administer services in the work place on a weekly basis. He (Father McDaniel) and a fellow chaplain conducted a forum at our hotel concerning the (recent) riots and how it was affecting individual soldiers. They became a part of the team and established a trust with my soldiers. I truly think that would not have been possible without the leg work that was done. Sirs, the point to this email is to say that this is a great example of how it should be done. Not necessarily in the same way our Chaplain accomplished success, but in each Chaplains own way. Without that bonding, you won’t reach near as many soldiers nor have their trust.”

The accolade from an Army National Guard First Sergeant was very encouraging to Father McDaniel, who serves in the Air National Guard.

“I am humbled and honored by First Sergeant Royer’s feedback to our senior chaplains on this mission,” Father McDaniel said. “As an Air Force Chaplain Corps, our vision includes caring for Airmen better than anyone thinks possible. This is what we strive for. That this feedback comes not from an Airman but from a soldier reflects the truly joint nature of our integrated Army and Air response to the pandemic in the National Guard. I could not be prouder of our Guardsmen during this mission; their professionalism and outstanding performance amidst our national emergency has been absolutely stellar. I am grateful to have had the opportunity to serve our nation’s finest during this nationwide emergency response mission. It was my honor to serve them in Illinois.”

Father McDaniel is a priest of the Byzantine Catholic Archeparchy of Pittsburg, which, like other Eastern Catholic Churches, exists in communion with the Roman Catholic Church. Father McDaniel, whose COVID-19 deployment began on May 18 and ended in July, serves with endorsement and faculties from the Archdiocese for the Military Services, USA. He has served as Chaplain in the Air National Guard since 2014. Serving on the faculty at EIU, Father McDaniel will occasionally assist at EIU’s Newman Center and St. Charles Borromeo in Charleston.

Catholic U.S. Military chaplains are legendary for going beyond the call of duty. Some of the most outstanding examples include Father Emil Kapaun, CH (CPT), USA, who died in 1951 in a North Korean Prisoner of War camp; Maryknoll Father Vincent Capodanno, CHC, LT, USN, killed in combat in 1967 in Vietnam; and Father Henry (Tim) Vakoc, CH (MAJ), USA, who died in 2009 from injuries suffered from a roadside bomb attack in Iraq. Since the Civil War, only five U.S. Military chaplains have received the Medal of Honor, the nation’s highest military decoration; all five were Catholic priests. Lesser known are the unsung Catholic priest-chaplains who go out of their way, day in and day out, to serve those who serve.

Taylor Henry is director of Public Affairs and Media Relations for the Archdiocese for the Military Services, USA.