Traveling to Springfield from around the Diocese of Springfield in Illinois, approximately 60 couples were at the Cathedral of the Immaculate Conception on Oct. 25 for the annual Mass for couples married 50 years or more. Bishop Thomas John Paprocki concelebrated the Mass with Msgr. David Hoefler, vicar general. 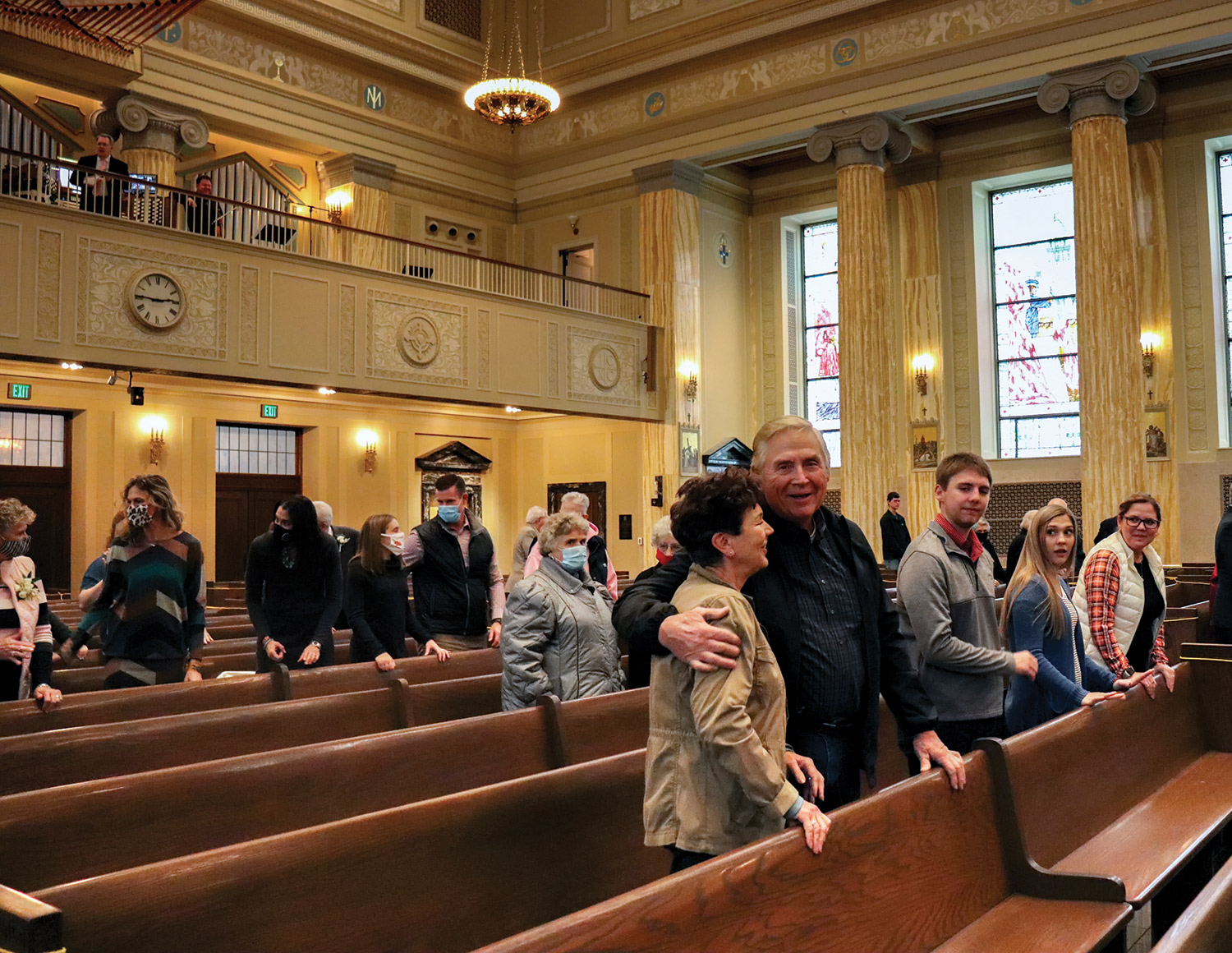 In his homily, Bishop Paprocki spoke about how the couples have grown in marriage, from a young couple, to becoming parents raising children to adulthood and now to their final years, loving one another despite the physical challenges that come with older age. “You offer a life-giving message,” he said, noting that love can be given in the humblest of ways.

Bishop Paprocki suggested that if they don’t already do so, that couples begin praying the rosary together, saying one decade of the rosary in thanksgiving for each decade of their marriage. Finally, he thanked the couples for “showing all of us and the world” what real love looks like.

Following the homily, Bishop Paprocki invited the couples to pray in silence and then to renew before God their commitment to live their marriages in holiness.

One couple who attended, Dave and Liz Cordes from Ss. Peter and Paul Parish in Alton who were married on Dec. 13, 1969, agreed that the most important thing in marriage is to take care of one another.

Connie Miller, who attended the Mass with her husband of more than 50 years, Larry Miller, said, “I tell young couples that when the wife or the husband has an idea, always go along with it, whether or not you think it might actually happen. And always keep busy!” The Millers were longtime members of St. Barbara Parish in Witt and now belong to St. Louis Parish in Nokomis.

Don and Pat Hastings, of St. Boniface Parish in Edwardsville were not able to attend the Mass, however their son Doug Hastings wanted to honor his parents, who celebrated their 70th anniversary on Aug. 10. The couple has eight children, 22 grandchildren and 21 (and counting!) great-grandchildren. “They raised eight children without a great deal of money and not one of us ever felt we were in need. They worked extra hard to provide all eight of us with a Catholic education from kindergarten through high school,” Doug Hastings said. “Mom always started all our family prayers at every meal and sat at the bottom of our stairway aiding all eight of us in our prayers before we drifted off to sleep. Dad and Mom took us to Mass every Sunday and although Mom was the prayer leader, I can recall that Dad always had his ‘beat up’ Missal with him. At our large family functions to this day, if Mom and Dad are there, Dad will lead the prayer before we eat.”

The couple was just 18 and 16 when they married. Their first home was a chicken coop Don bought, put on a hay wagon, drug it into town, and then added two small rooms onto it, adding running water. Their son says they went on to start several successful businesses.

“No one accomplishes all that they did without a deep faith and a love for God and each other,” said Hastings. “I believe the most gracious gift God has blessed Mom and Dad with, is love, their love for each other, the beacon of love they have been for all of the family and all who have had the pleasure to know them!”