Interesting people buried at Catholic cemeteries in our diocese

Sister Rachel and Sister Josephine: They were part of the unveiling of the statue of President Abraham Lincoln at his tomb in 1874 at the invitation of President U.S. Grant.

Daniel McGill: During the 1908 race riots in Springfield, he hid several black residents in his basement to protect them.

Joseph Bernard: Pitcher for the St. Louis Cardinals in 1909.

Patrick Wright: Infielder for the Chicago Colts (baseball) in 1890.

Joseph Stanley Smith: Air Force pilot who went down during a combat mission over Cambodia at age 25. It was 46 years later when the Defense POW/MIA Accounting Agency contacted Smith’s widow, Elaine Unser Mills, to give her the news a DNA match with the remains confirmed he had finally been located. Smith was welcomed back home July 17, 2017.

Francois Antoine Yenck: Immigrated to United States in 1880. He was a veteran of the French Army Imperial Guard, a group of elite soldiers of the French Army under the direct command of Napoleon I. It acted as his bodyguard and tactical reserve.

Helen J. DeBrun: As a nurse in Champaign County, she worked during the University of Illinois football games. A notable patient of hers was Red Grange, one of the most famous football players of all time. She served as his private nurse during his stay at Carle Hospital. She also provided nursing care for Al Capone.

Elise E. Malhiot: Founder of Assumption. In 1856, he traveled to Central Illinois and purchased land adjacent to a village called Tacusah. The Illinois Central Railroad caused the town to increase in size, so he purchased several tracts of land surrounding Tacusah. He named his new community Assumption after his home parish of Assumption, La. He convinced a Canadian priest to establish a Catholic church and cemetery that he donated the land for. 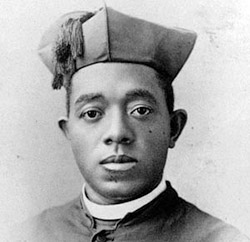 Venerable Father Augustin Tolton: Father Tolton was born into slavery in 1854. In 1862, his mother and siblings made a daring escape across the Mississippi River to Illinois. After settling in Quincy, he went to school at St. Peter’s Catholic School. Tolton later went to seminary school in Rome because no American seminary would accept a black man. Thinking he would minister in Africa, once he was ordained, he was instead sent back to Quincy, where he arrived to thousands of supporters. Known for his incredible singing and homilies, Tolton spent several years in Quincy before transferring to Chicago. He died of heatstroke at the age of 43 on July 9, 1897 and is buried at St. Peter’s Cemetery in Quincy. Most recently, Pope Francis declared him “Venerable” on June 12, 2019, the second step of four to becoming a saint in the Catholic Church. Father Tolton is recognized as the first black priest in the United States. 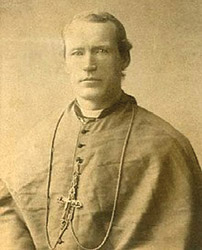 Bishop James Ryan: He was selected by Pope Leo XIII as the third bishop of the Diocese of Alton (which later became the Diocese of Springfield in Illinois in 1923) and was installed at Ss. Peter and Paul Cathedral in Alton on May 1, 1888. Bishop Ryan had the longest tenure of any bishop of our diocese, serving a little over 35 years. The estimated number of Catholics rose from 70,000 at the beginning of his tenure to 87,000 at the time of his death. During his episcopate, 40 new churches were opened, and six hospitals were founded. Enrollment in Catholic schools increased from 7,000 to 13,000, and the number of parochial schools increased by 11. Bishop Ryan is best known, however, for his active role in expanding the Alton orphanage. In 1919 he began raising money for the construction of a five-story building that could house 500 children, now called the Catholic Children’s Home. By the time of his death in 1923, he had helped raise $300,000 for the orphanage.

Sam Yurkovich: Born in Austria on June 5, 1895, he came to America in 1899 at the age of 4. He grew up in Mt. Olive along with his 16 siblings. he enlisted in the U.S. Army in 1917. He was killed in in action on Oct. 6, 1918, in the Battle of Champagne, one of the turning points of WWI. His body was not returned to Mt. Olive until October 1921. The American Legion post took charge of the funeral which was conducted in complete military fashion. The funeral was held at the Church of the Ascension (now St. John Paul II Parish), after which his body was carried to the cemetery on a caisson drawn by four horses with a military escort and the Mt. Olive band leading the procession.