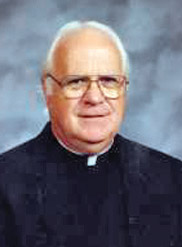 Father Fanale was born on Nov. 19, 1942 in Springfield, the son of Michael and Gertrude (Davis) Fanale.

From 1969 to 1979, he taught religion and English at Bishop McNamara High School in Kankakee, before completing post-graduate studies from 1979 to 1986. He spent the next four years serving as campus minister and English professor at Saint Mary-of-the-Woods College in Terre Haute, Ind., until June 1990. From 1990 to 1996 he worked on the history of the Viatorians in the Chicago Province, and taught part time (1990 to 1992) at DePaul University in Chicago. His last assignment came in 1996, when he was assigned as pastor of St. Anne Church in St. Anne. Father Fanale served there until July 2019, when he retired but continued to live in the community.

He is survived by his brothers Michael (Dorothy) Fanale of Southport, N.C., and Thomas (Tamara) Fanale of Springfield; and his sister Trudi (Robert Bjorge) Fanale of Longmount, Colo.

He was preceded in death by his parents and his sister, Marianne Fanale.

A visitation for Father Fanale was held on Oct. 20, at St Anne Catholic Church, and a Mass of Christian Burial was celebrated on Oct. 21, also at St. Anne. Interment was on Oct. 22 at Calvary Cemetery in Springfield.