ALTON — Father Peter J. Donohoe, 95, died peacefully on Oct. 26, at his home surrounded by family. He was the oldest diocesan priest in the Diocese of Springfield in Illinois and celebrated 70 years of priesthood in May. 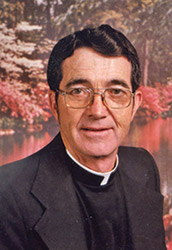 Born on Sept. 24, 1925 in Dromard, Co. Longford, Ireland to John J. and Bridget (McCabe) Donohoe, he was one of 10 children. His education commenced at the one-room Leggagh School, close to St. Mary’s Roman Catholic Church, where he served as an altar boy. There, his pastor invited him to consider becoming a priest. After his secondary education at the Latin School, Co. Cavan, he attended St. John’s College Seminary, Co. Waterford, Ireland, to study philosophy and theology. His devotion to God and desire to serve promoted his parish involvement. He attended Mass regularly and assisted with altar services. A natural leader, he built unbreakable ties with the parish’s clergy.

In 1946, Father Donohoe arrived in the United States to finish his studies at Kenrick Seminary in St. Louis, where he excelled in philosophy, theology, canon law, church history and public speaking. He enjoyed campus ministry, attended retreats, and forged connections with the diocese. His first work was as temporary assistant at St. Mary Parish in Taylorville.

Father Donohoe will be remembered as a dedicated community leader who passionately served his people with his bright spirit, booming voice, and lively humor.

Surviving are his sisters Margaret Keegan and Veronica Prunty of Ireland, and many nieces, nephews, grand-nieces, and grand-nephews. He was preceded in death by his parents and several brothers and sisters.

Burial was in St. Patrick Cemetery in Godfrey.

Donations may be made for memorial Masses at Ss. Peter and Paul Church, Alton; the St. Vincent de Paul Society; or Catholic Charities.