Pope Francis’ comments on civil unions taken out of context

Last month, media from around the world ran a story indicating Pope Francis said that he supports civil unions during an interview in the recently released documentary Francesco. The headlines and stories created a stir around the globe, especially among the Catholic faithful. Questions about the context of the interview, what Pope Francis really said, what quotes did not make it into the documentary, and differing translations and opinions added to the chaos. Some even wrongly speculated Pope Francis was conveying his support for same-sex relations or approving of same sex-couples adopting children. This added to the confusion. 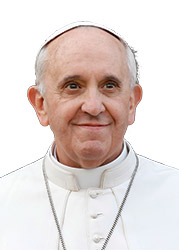 On Nov. 1, the Vatican issued a clarification that Pope Francis’ words were not only taken out of context, but the documentary even heavily spliced together several parts of an old interview Pope Francis gave in 2019. This heavy editing resulted in Pope Francis being taken wildly out of context.

A letter of clarification was sent to all bishops in the United States by Archbishop Christophe Pierre, the Apostolic Nuncio (papal representative) to the U.S. In it, the letter clarifies this episode and that Pope Francis has always maintained church doctrine that “marriage is between a man and a woman.”

Archbishop Pierre said that the Secretariat of State of the Holy Father had asked him to share with the Bishops of the United States some observations in reference to certain remarks contained in the documentary by director Evgeny Afineevesky, that have caused various reactions and interpretations in the last few days. The Holy Father directed that these observations be offered “in order to permit an adequate understanding of his words.”

In his letter, the Apostolic Nuncio wrote, “More than a year ago, in the course of an interview, Pope Francis responded to two distinct questions at different moments that, in the said documentary, were edited and published as a single response without the necessary context, which has resulted in confusion. The Holy Father, first and foremost, referred in a pastoral manner to the need, within the family, for a son or daughter with a homosexual orientation to never be discriminated against. The following words are intended in this sense: ‘Las personas homosexuales tienen derecho a estar en familia; son hijos de Dios, tienen derecho a una familia. No se puede echar de la familia a nadie ni hacerle la vida imposible por eso.’”

Archbishop Pierre then noted that the following paragraph from the Post-Synodal Apostolic Exhortation concerning love in the family, Amoris laetitia (2016), can shed light on those responses: “During the Synod, we discussed the situation of families whose members include persons who experience same-sex attraction, a situation not easy either for parents or for children. We would like before all else to reaffirm that every person, regardless of sexual orientation, ought to be respected in his or her dignity and treated with consideration, while ‘every sign of unjust discrimination’ is to be carefully avoided, particularly any form of aggression and violence. Such families should be given respectful pastoral guidance, so that those who manifest a homosexual orientation can receive the assistance they need to understand and fully carry out God’s will in their lives.”

The Apostolic Nuncio’s letter continued, “A subsequent question during that interview pertained rather to a local law of ten years ago in Argentina, regarding ‘matrimonios igualitarios de parejas del mismo sexo’ and to the opposition of the then Archbishop of Buenos Aires towards it. In this respect, Pope Francis affirmed that ’es una incongruencia hablar de matrimonio homosexual,’ adding that, in such a precise context, he had spoken of the right of these persons to legal cover: ‘lo que tenemos que hacer es una ley de convivencia civil: tienen derecho a estar cubiertos legalmente. Yo defendí eso.’”

Archbishop Pierre’s letter then recalled that the Holy Father expressed himself during a 2014 interview as follows: “Marriage is between a man and a woman. Secular States want to justify civil unions in order to regularize the various situations of cohabitation, driven by the necessity to regularize economic matters between persons, such as ensuring health care, for example. This relates to various forms of cohabitation agreement, which I would not be able to list. The different situations must be examined and evaluated, according to their circumstances.”

The Apostolic Nuncio concluded by saying, “It is therefore clear that Pope Francis was referring to particular State provisions, and not certainly to the doctrine of the Church, which has been reiterated on numerous occasions over the years.”