Looking into the Eyes of Christ 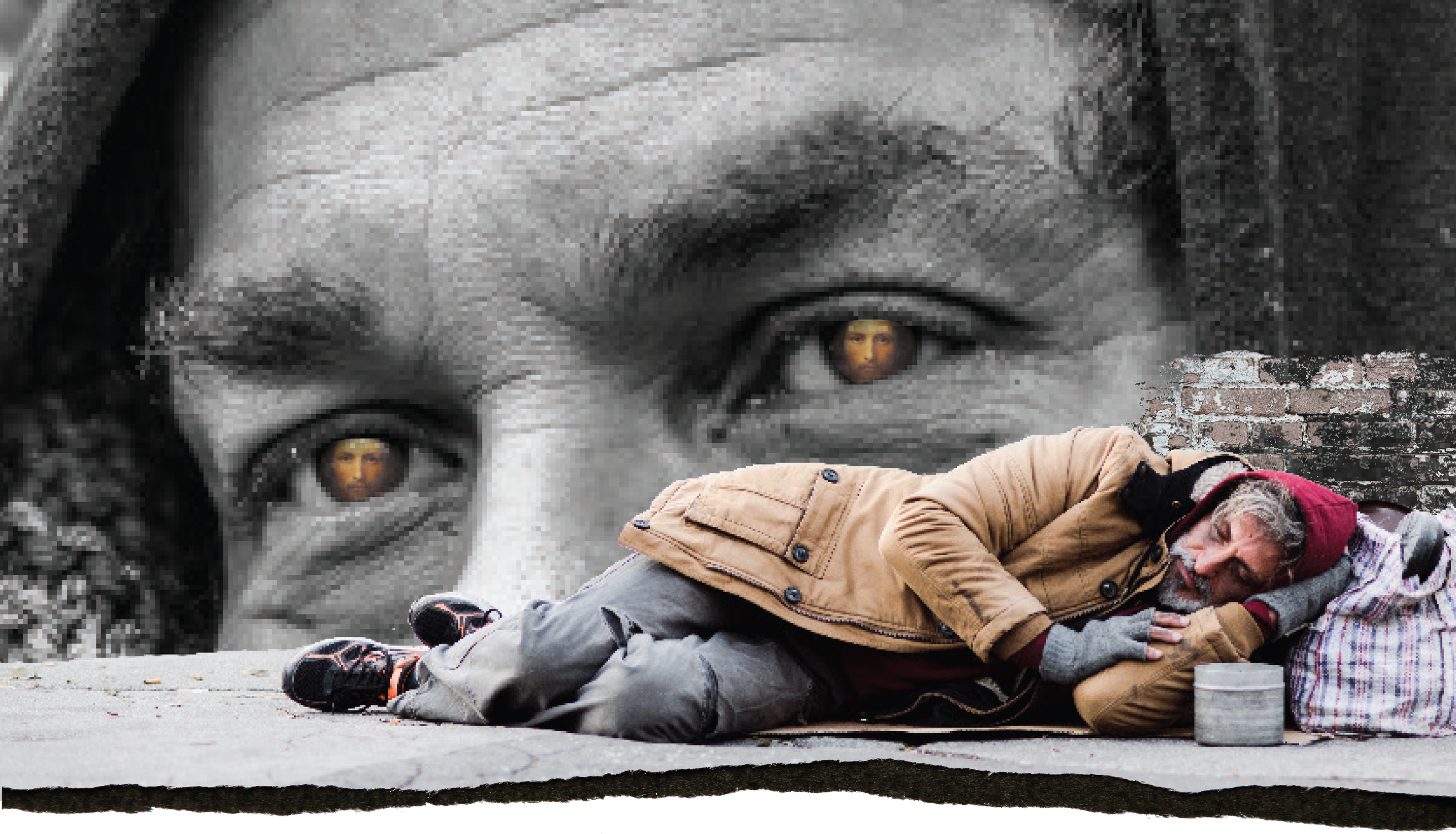 It’s a Saturday morning as rain pours down in Springfield. A steady wind and chillier than expected temperatures add to the misery outside. Yet there, on the corner of North Fifth and Carpenter streets, sits an elderly man with a sign: “Homeless. Anything helps.” You can hardly see his face as he tries to take some sort of cover while the rain is pelting him. Cars are driving by. No one is stopping. No one really looks. Help seems hopeless.

That’s when Deacon Mick Palazzolo of St. Aloysius Parish in Springfield enters the scene. Deacon Palazzolo has food, water, fresh socks, and a poncho. As he approaches, Deacon Palazzolo — who knows the man, his name, and his story which led him to the streets — says hello, helps put a tarp over the man’s head to protect him from the heavy rain, offers the man these basic necessities, and then prays with him. The man thanks him and goodbyes are said. Because of the tarp and a hat on the man’s head, all you can really see are his eyes, and as they look up at Deacon Palazzolo, you can tell this simple act of love and charity has touched both men to the core. From there, Deacon Palazzolo moves onto the next homeless person he can help this morning.

“The real thing homeless people need is just compassion from people, a conversation to make them feel like they are part of our society,” Deacon Palazzolo said. “So, when we go to them with food, it is really just an icebreaker. Once you get in like that, they will talk to you and pray with you. That’s what they need — the companionship and the feeling they have not been forgotten.”

Deacon Palazzolo’s mission of being on the front lines to help the homeless is part of the Street Ministry at St. Aloysius. People from Catholic and non-Catholic churches and other generous donors from the area donate food, clothing, and monetary gifts to the Street Ministry. Then, the Women’s Group and Social Justice Group at the parish team up every other Saturday at the parish rectory to make breakfasts and lunches and pack clothing items and other personal necessities like soap and toilet paper.

The Corporal Works of Mercy

Did you know, when you help the homeless, you are living out several of the Corporal Works of Mercy? 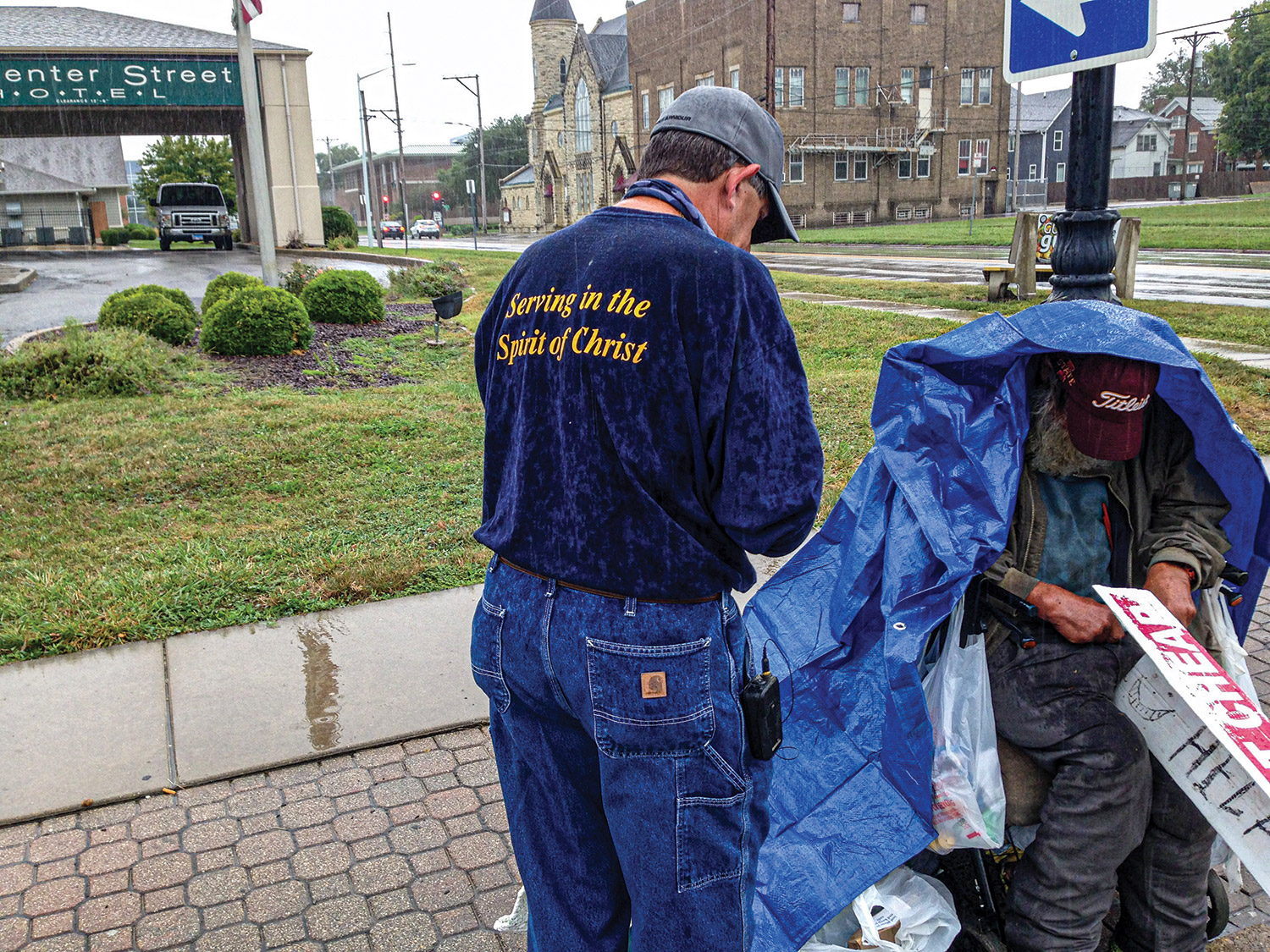 From there, everything goes into individual bags and Deacon Palazzolo and other volunteers meet at the Salvation Army, divide up the bags, and hit the streets to deliver them to dozens of people in need, bringing dignity, respect, and love to homeless people across the city. Besides offering the homeless food, drink, and clothing, Deacon Palazzolo will offer to pray with each person he meets. He will also help guide them to organizations in Springfield that help the homeless with food, shelter, locating a job, getting warm in the winter, or cool in the summer.

“This ministry is something from the heart,” said Connie Crawford, who is part of both the Women’s Group and Social Justice Group. “It has really changed me. When I used to see homeless on the street, I would think ‘Why are they not working? Why are they on the street?’ Then, when Deacon Mick started talking to us about the homeless and a couple of us went out with him to see what was going on — all it took was one time. It just hits your heart.”

“With so many shelters closed due to the coronavirus pandemic, people losing their jobs … so many are staying on the streets. The need keeps increasing,” Deacon Palazzolo said.

On this particular Saturday morning, right after Deacon Palazzolo gave food, water, and socks and then prayed with a couple of homeless women who were seated outside the Springfield library, a man whom he had never seen before walked up. His hat was worn, his beard long and unkept, and face weathered. After Deacon Palazzolo offered him a bag of food, water, and socks, the man was most appreciative. It turns out he was new to the city, arriving just a couple days before. He did not say where he was from. Deacon Palazzolo told the man about some organizations in the city that could also help him get back on his feet, and then the man welcomed a prayer. They both took off their hats to pray, right there, in between the library and City Hall. It is this impact that brings Deacon Palazzolo, and all the volunteers back out to help those living on the streets.

The St. Aloysius Street Ministry is always in need of food, bottled water, and socks. In fact, socks are the most needed. Send donations to: 2125 North 21st St., Springfield, IL 62702.
You can make monetary donations online at saintaloysius.org/donate. 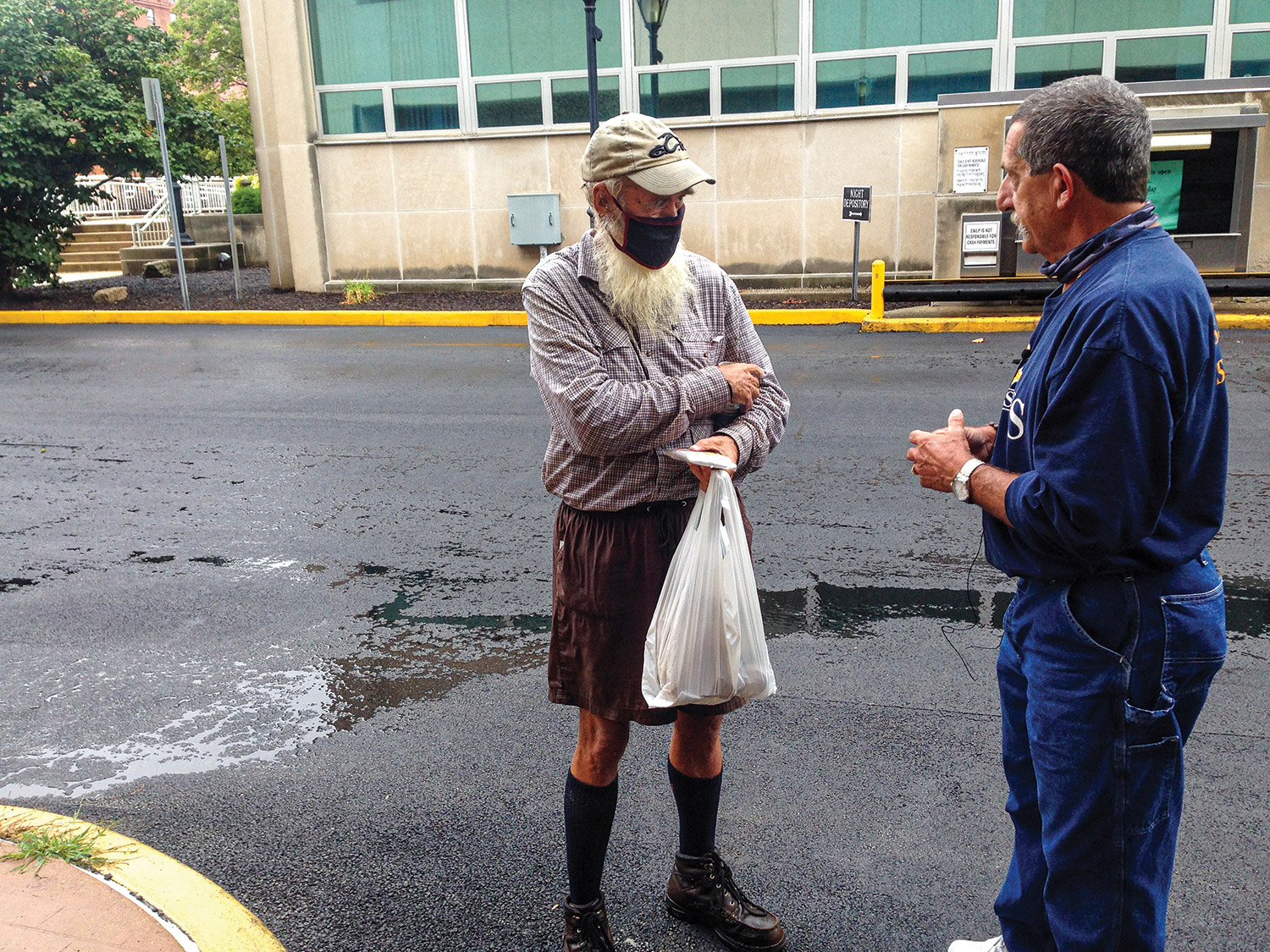 “As long as we are doing the work of Jesus Christ, I think he protects us,” Deacon Palazzolo said. “I have always felt safe around the homeless and as you grow in your trust of them, you grow more comfortable and you realize they are people just like we are, it’s just something just went wrong in their life. There are people out there who are nurses, people who have college degrees, people who used to be millionaires. Things just fell apart in their life, and they ended up on the street. They are still God’s people who need our help. I think sometimes they are put there for us to learn from — a source for how to take care of people — a way to teach us to reach out to people to do God’s work. I always tell the school children, ‘When you help someone who is homeless and look into their eyes, you are looking into the eyes of Christ.’”

Ultimately, Deacon Palazzolo wants all the churches in Springfield to team up and have one universal Street Ministry team to help the homeless. He envisions a virtual sign-up sheet where every day a church or group of people pack food and supplies and hit the streets. Until then, his message for those who are afraid to approach the homeless or are fearful to talk to the homeless is simple: Be not afraid.

Deacon Palazzolo offers several stories that left a lasting impression on him – stories that will touch your heart and show the desperate need of our brothers and sisters in Christ who are homeless:

♦ “A parishioner at our parish used to get comfort crosses from the Holy Land, which were made out of olive wood. I would bless them, and then we would give them to the homeless while we prayed with them. Most homeless people have a strong faith life, and they appreciate us giving that to them. About two years ago, there was a gentleman in his early 40s who froze to death in an abandoned house. All he had on him was 35 cents in his pocket and the wooden cross I gave him a year before.”

♦ “The first time we went out was two-and-a-half years ago, and it was really hot. It was summertime. The last place we went was by Catholic Charities in downtown Springfield. Sitting on a picnic table, there was a homeless family who were forced out of their home. They were from Chicago. It was a man, a wife, and three children. We worked with them that afternoon, got them in a hotel that evening, and then got them housing. We then got them furniture. That was really rewarding for everyone to see for the first time, the impact we made, that we got an entire family off the street.”

♦ “We had a recent case where there was a gentleman who was sick for three months. I told him this one day that I would come get him the next morning and take him to the hospital. But the next morning, he decided he didn’t want to go. Later that day, an ambulance took him to the hospital, and he spent nine days getting better from a chronic stomach disorder. So, that makes you feel good when you make aware to them that they need medical attention, and they actually follow through with it.”

♦ “Recently, there was a family at the cooling center. It was a young man and woman and a small baby in diapers. They were ecstatic someone came to give them food and pray with them. It really breaks your heart when you see a small child like that, and you can tell they had not been taken care of really well or have the resources to be taken care of.”