Father Albert Langheim, OFM, died Dec. 6 at Sunrise Manor in Virden. He was born April 9, 1927 in Girard to Henry and Elizabeth (Sommer) Langheim. He was one of 10 boys. 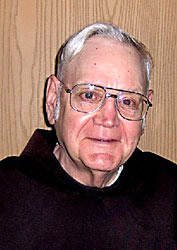 Father Al entered the Franciscan Order on July 3, 1948 in Teutopolis. He was ordained to the priesthood on June 24, 1955 by Bishop William A. O’Connor. He celebrated his first Mass in Virden. Following that he earned a master’s in counseling and certification as a clinical pastoral education supervisor. He worked in psychological counseling and hospital chaplaincy for over 20 years, and a number of those years he helped with the formation of many young men pursuing vocations to religious life and the priesthood. He was one of the pioneers in integrating theological studies with behavioral sciences and an early leader in the establishment of the National Association of Catholic Chaplains.

One of Father Al’s proudest achievements was the founding of The Museum of L’Arbre Croche History in 1995. It is located on the grounds of the church Father Al pastored in Cross Village, Mich. It is filled with artifacts and resource material of local Native Americans and the earlier explorers and settlers in northern Michigan.

Father Al was preceded in death by his mother and father, and brothers Lawrence, Harold, Ernest, Henry, Aloysius, Paul, Francis, and Norman.

He is survived by a brother, Bernard (and Patricia) Langheim of Salem, Va.; his sister-in-law, Peggy Langheim of Virden; several nieces and nephews.

A funeral Mass was celebrated at Sacred Heart Church in Virden on Dec. 12. Donations can be made to the Retirement Fund for the Franciscan Province of the Sacred Heart, 3140 Meramec St., St. Louis, MO 63118. Airsman-Calvert Funeral Home in Virden was in charge of arrangements.