Despite miscarriages, job losses, other stressors, Edwardsville couple reflects on what it means ‘to have, to hold, to honor’

Written by Jim and Nancy Jatcko

We often refer to our marriage as “Jim and Nancy’s Excellent Adventure.” If someone had told us that our married life would be a roller coaster, we might have opted to stay single! Yet, in his providence, God knew what he was doing when he brought us together through a mutual friend.

We have been married for 31 years and have five beautiful children on earth and three dear babies awaiting us in heaven. We are an unconventional bunch and have had the lion’s share of stressors to say the least: multiple miscarriages, a child in the autistic spectrum, a critically ill newborn and multiple job changes and losses. Through all these things we realized how God was perfecting, purifying, and detaching us from this world so we would long for the next. 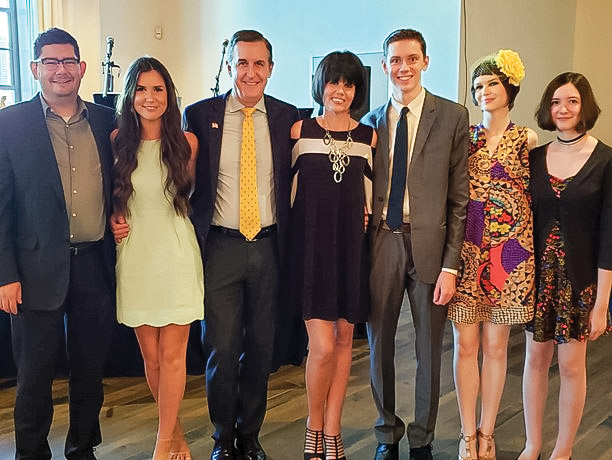 This began with Jim’s first job loss when he had no more excuses for Nancy’s father’s yearly invitation to accompany him on retreat. As it would happen, Nancy’s dad had a massive heart attack days before the retreat and summoned Jim from his hospital bed to attend without him. That retreat and the faith that resulted was pivotal in our marriage. With it, we discovered how to see married life through the lens of our Catholic faith. No more “Jesus pill” for us — pulling God off the shelf when things went wrong and putting him back in the medicine cabinet when life was good. From then on, we invited him into every single nook and cranny of our lives, not just where he was convenient.

We relearned the rosary and prayed nightly for the gift of employment and a week later, Jim received a call from a former client offering a job in Atlanta. We realized that our prayers were not only heard but that God had bigger plans for our marriage. We joined a group of faithful friends serving on marriage prep programs, sharing our experiences with engaged couples. We attended weekly prayer groups, monthly days of reflection, and yearly retreats. These things allowed us to center our married life on Christ and actively pass our Catholic faith to our children. We started to “encounter” Christ in a personal and transformative way. Even suffering had meaning, and we felt peace even through the most painful moments.

One of those moments occurred when our third child came into the world in the wee hours of Aug. 4, 1996. Later that night, a doctor informed us our daughter had developed an infectious disease. She was so sick that the hospital brought in the CDC’s leading expert to operate. We prayed and planned her burial. They took us to see her and prepared us for all the wires, tubes and machines keeping her tiny little body alive. A dear friend gave us a miraculous medal and the nurses hung it on her bed. We knew that if we genuinely loved God and believed that he ordered all things for our benefit, his plan for her to be with him was better than anything we could offer on earth. We told him that he could have her if this were his will. In the days and weeks following, the “ifs” turned into “whens” and our daughter miraculously got better each day.

Suffering is redemptive. We do not advocate wishing for suffering but know that God is drawing you close to himself who suffered when you encounter a job loss, a sick child or family trials. He offers you the grace through the sacrament of marriage to faithfully endure it all.

Jim and Nancy Jatcko live in Edwardsville and are parishioners at St. Boniface Parish.