Catholics across diocese ‘mirror the march’ in Springfield

Despite cold temperatures, more than 150 students and other lay Catholics from across the Diocese of Springfield in Illinois hit the streets of downtown Springfield to march for life Jan. 29, raising their voices for the voiceless and protesting unjust laws that attack the dignity of human life. Passing the Statehouse, Illinois Supreme Court building, and Governor’s Mansion, Bishop Thomas John Paprocki led the group in peacefully praying the rosary for an end to abortion and a greater respect for human life. This year marked the 48th anniversary of Roe v. Wade, the Jan. 22, 1973 U.S. Supreme Court decision that legalized abortion.

“All life should be respected, and the unborn cannot stand for themselves, so it is important that young adults and people of all ages stand for life,” said Jenelle Vogt, a student at Eastern Illinois University who is from Sigel.

“Being pro-life doesn’t mean you sit back,” said Chloe Albrecht, a student at Father McGivney Catholic High School in Glen Carbon. “You are an activist. You fight for the people who are forgotten — for people who cannot speak for themselves.”

Every year, hundreds of students from the Diocese of Springfield in Illinois attend the March for Life in Washington, D.C., but due to the COVID-19 pandemic and safety precautions, the D.C. March for Life went virtual this year. Catholics across Central Illinois rallied quickly to organize a local event instead, joining with Bishop Paprocki to pray in-person for an end to abortion and advocate for the most vulnerable among us. Groups included Catholic grade schools in Springfield, Father McGivney Catholic High School, the Newman Center at Eastern Illinois University, the Crusaders for Life (Springfield and Chicago Chapters), and the Sisters of St. Francis of the Martyr St. George in Alton.

“Abortion is a personal issue for me,” said Nathalie Corbett, who is a member of the Crusaders for Life Springfield Chapter. “My biological mother was pregnant with me and my twin brother, and she had cervical cancer. It was an unplanned pregnancy, too. She decided to choose life for us. So, I want to stand up for the unborn, the way she stood up for me and my twin brother.” 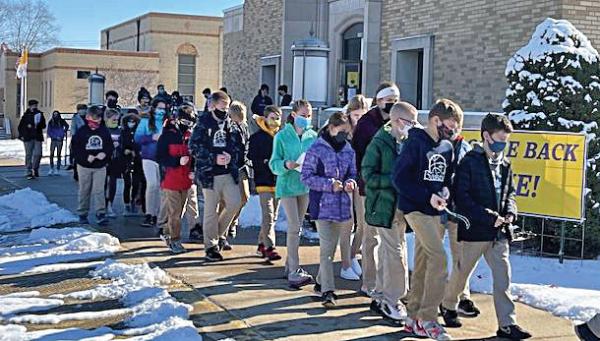 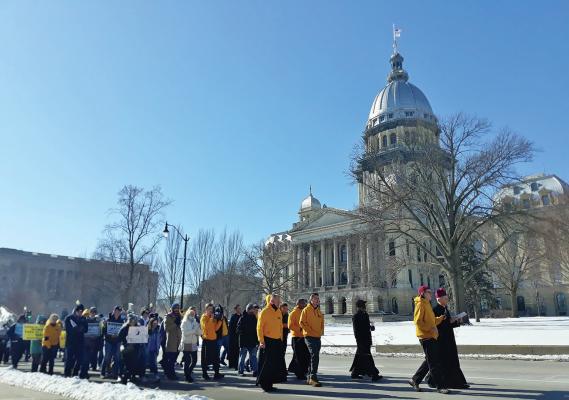 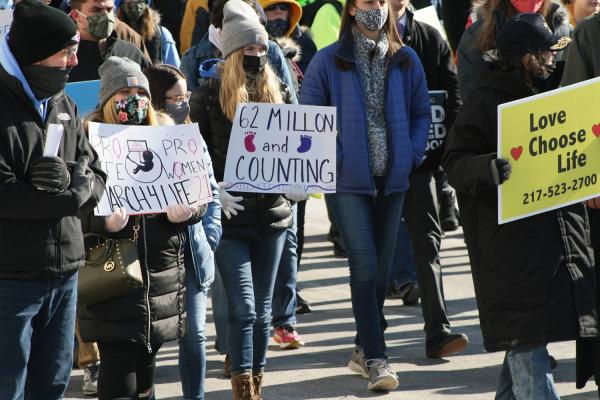 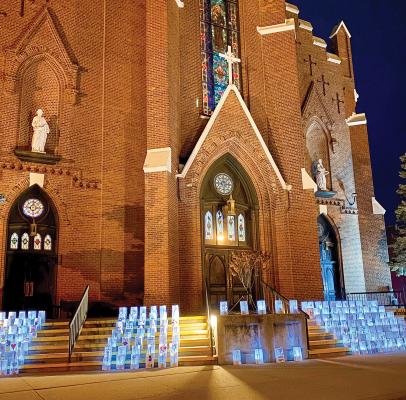 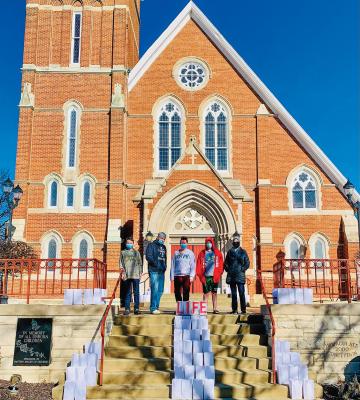 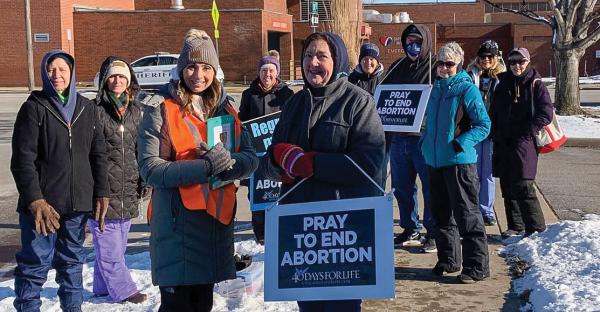 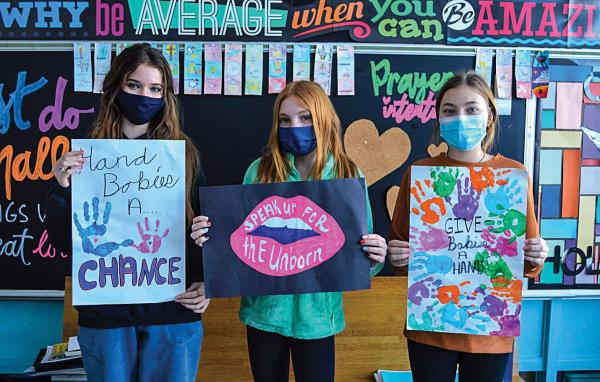 Catholics from parishes, schools, and families in the diocese first joined together for a Life Mass at 10 a.m., celebrated by Bishop Paprocki at the Cathedral of the Immaculate Conception in Springfield. Because not every school could send students to Springfield, some schools in the diocese “mirrored the march” by having their own pro-life march at their school, some celebrated their own Life Mass with their parish priest, while others joined the Mass at the Cathedral via live stream. In his homily, Bishop Paprocki reminded the students to stay hopeful.

“Our first reading from the Letter to the Hebrews (Heb 10:32-39) says that we will suffer abuse and affliction when we give public witness to our faith, such as our belief in the sanctity of human life and the evil of abortion, but we are told to be confident, for it will have a great reward,” Bishop Paprocki said. “The passage from the Gospel of St. Mark (Mk 4:26-34) reminds us that the seeds of faith are small when they are first planted, but they eventually yield an abundant harvest. So too, we must not let ourselves be discouraged, for discouragement comes from the devil, but we must be confident that even our smallest efforts can bear great fruit.”

After Mass, Bishop Paprocki, priests, teachers, students, and other lay Catholics bundled up to participate in a prayer march in downtown Springfield. The group prayed the rosary, praying for vulnerable mothers contemplating having an abortion, those who work in the abortion industry, mothers who are struggling financially or emotionally, for lawmakers to enact laws that defend the sanctity of human life, and for a greater respect for life, including an end to abortion. The march in Springfield passed buildings of each branch of government before returning to the Cathedral of the Immaculate Conception for Benediction.

“By receiving the sacrament of holy Communion and being in union with one another as a diocese, I feel like we are able to prepare ourselves spiritually and mentally for remembering what we are doing and why we are here,” said Cameron Krager, a student at Eastern Illinois University who is from Raymond.

“I hope people understand that it is not just polls or news articles, but it is actual people who are passionate about this, and it is not going away anytime soon as we will not stop talking about it (respect for life),” said Barrett Larkin, a student at Father McGivney Catholic High School.

“The gift of life is the first gift we received from God, and I think we all agree it is an amazing gift,” said Sister M. Veritas Wilks of the Sisters of St. Francis of the Martyr St. George, director of Youth and Women’s Ministry. “Having received this gift, we have a responsibility, the honor, and the joy of witnessing to what a beautiful gift it is. That means standing up for those whose life is being threatened in the womb or at any stage of life.”