It all started with an ice cream cone.

Over eight decades ago two teenagers — Kincaid native Victor Lanzotti and Taylorville native Lucille Russell — met on the town square in Taylorville. When Lucille suggested that Vic buy her an ice cream cone, Vic had a flirty response: “Sure, but just the nickel one so you won’t get fat!” As it turns out, Lucille got her ice cream and Vic got the girl.

The teenagers fell in love and were married on Feb. 1, 1941 at St. Patrick Church in Detroit, Mich., where Vic was sent by the military. Vic was 19 (nearly 20) and Lucille was 17 (nearly 18) at the time of their marriage. Lucille followed Vic in the military until he was sent to India work on military planes. Their first child, Victor Joseph, was born in 1943, and then Lucille moved to live with her parents while Vic served in India. Later another son, Daniel, and a daughter, Connie (deceased) were born. In addition to their children, they have two daughters-in-law, Joyce and Lisa; a son-in-law, Rennie Young; nine grandchildren; and 13 great-grandchildren.

During WWII Lucille worked at Mueller Company in Decatur, making parts for bombs. When the war was over, she was primarily a homemaker. When Vic returned from the service, he originally went to work at A.E. Staley Manufacturing Company, before going to Milliken University as an accounting major. He then worked for Burroughs, Inc., selling business machines and computers to small- and medium-sized banks in Decatur and Champaign.

Both Vic, now 100 and Lucille, who turns 98 March 18, grew up in Catholic families. They passed their faith onto their children. “They continue to follow their faith and raised their children Catholic,” says their son, Dan Lanzotti. The children attended Catholic schools in Decatur — St. Patrick, Our Lady of Lourdes, and St. Teresa High School. “They attended Mass regularly until the time when they needed to move to an assisted living facility,” he says. “They received Communion from a Eucharistic minister there.

“My parents lived their Catholic faith in their daily actions by following the Ten Commandments. This was demonstrated by the love and care they showed to us and others,” he says. “This provided the foundation for their children’s marriages. They provided a united front with their parenting, for anything from disappointments to achievements. They were constantly present for everything. They were involved in their children’s lives. They offered support, encouragement and discipline when needed. But most of all they taught us the importance of our faith and family life.” 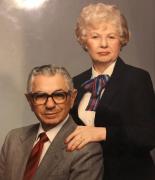 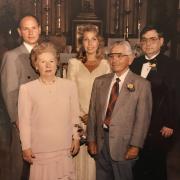 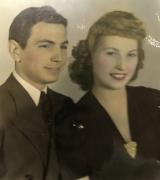 In addition to raising their children and working, the couple has always believed in having date nights so they could spend time together. They enjoyed ballroom dancing in Chicago, dancing to Lawrence Welk and other famous big-time orchestras. They also played bridge until they were in their 90s. “And out of 28 couples, they never finished less than fourth for total score, for the year,” says Dan.

Still, life hasn’t been without its sadness and challenges. “Connie passed away on March 3, 2018 from a brain tumor,” Dan says. “She was a glorious person, and it was a great loss to Vic and Lucille — their baby girl. Their faith comforts them in knowing she is in Heaven.”

Currently, Vic and Lucille live at Centennial Pointe in Springfield, where COVID-19 has of course meant having limited outside visitors. “Centennial Point has a wonderful staff that aids their activities of daily living,” Dan says. “Beyond that they have a great deal of warmth and attention to their human need of interaction, especially during the COVID pandemic.”

Although their 80th anniversary was fairly quiet, with a cake shared at their assisted living home, Vic and Lucille were able to thoroughly enjoy their 75th anniversary with their family members. For that anniversary, the family rented a large van to take children, grandchildren, and great-grandchildren to visit the childhood homes of both Lucille and Vic, as well as the neighborhoods where they spent their early years of marriage. “The stories of their experiences just poured out,” Dan remembers. “They commented that we were driving too fast and to slow down — we were driving at idle speed!”

Dan says he understands why his parents have had a long, happy marriage. “You know, my parents never had any distrust, and had loads of respect for one another,” he says. And they kept their sense of humor. “Mom once said her friends thought she had the perfect man at age 90 because he still drove, and could dance, and had all his hair!”

On a more serious note, “To this day, Dad says that she is beautiful, both inside and out — and they still hold hands at bedtime,” Dan says. “Theirs is a true love story.”

As for ice cream? Dan says it has continued to be a mainstay in the couple’s household. “There has always been one or two half-gallons of ice cream in the freezer without failure, even since I can remember!”