‘I felt honored to receive the Eucharist’

TAYLORVILLE — For decades, Lucia Snow of Taylorville described herself as a “spiritual person.” But things started to change in 2017. That’s when she and her family moved close to St. Mary Church and School in Taylorville. Two of her children enrolled in the school and “fell in love with the Catholic faith” she says. Soon, they were baptized, along with her two daughters at the time. 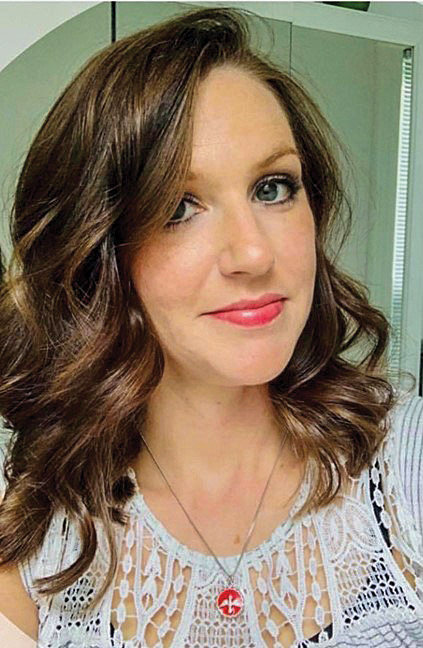 “I enjoyed the church,” Snow said. “Over the years, I had visited other churches but had yet to visit one I had felt comfortable in. I seemed to click with the Catholic faith. It just made sense to me. So, I decided to take the RCIA classes and convert.”

After becoming Catholic in 2019, today, the 36-year-old mother of six loves being Catholic, going to Mass with her family at St. Mary in Taylorville, and continuing to work on growing in her relationship with Jesus Christ. Catholic Times editor Andrew Hansen interviewed Snow about her conversion to Catholicism.

Q. Did you ever have a moment during your RCIA process where you struggled or even doubted this was the faith for you, and if so, what did you do?

A. I was intrigued and surprised by the history of the Catholic faith. I hadn’t realized there was so much to learn. There’s so much to it.

Q. During your RCIA process, you were what the church calls a Catechumen, someone who was unbaptized. On the day you were baptized, you also received confirmation and first Communion, officially becoming part of our faith. Describe the joy and emotions you felt?

A. My boys told me they were proud of me, so I was overwhelmed with emotion. I was happy to have found the faith and to be sharing this journey with my children and family. I felt acceptance, and I was extremely excited.

Q. What was the hardest aspect of becoming Catholic? Was there a teaching you had to dive deep to fully accept and how did you overcome that?

A. I would have to say going to confession regularly was a bit of an intimidating thought. Opening up like that is uncomfortable for me. But, after the first time I went, I felt relieved.

Q. What was it like receiving the Eucharist for the first time?

A. I felt honored to receive the Eucharist. It was exciting for me.

Q. You have been Catholic for a couple of years now. What do you love about it?

A. I love going to Mass with my children. I feel like we are happier with God in our lives, more compassionate and understanding. I’ve thoroughly enjoyed the Catholic faith, and I am so glad I decided to convert.

Q. When you look back on your faith journey, what stands out?

A. What stands out the most for me was the excitement on my boys’ faces when I would come home from RCIA, and we would talk about what I had learned. And they could brag about how much more they knew about the faith than me.

Q. What are some Catholic activities you do with your children?

A. We do the Jesse Tree together and try our best with Lent.

Q. Is there a particular saint you have a devotion to and why?

A. I chose St. Anne as my saint name for my confirmation. I chose her because she’s a motherly figure.

Q. For people who have fallen away from the faith, for cradle Catholics, or people who go through the motions, what is your message for them?

A. I suggest attending some RCIA classes. My boyfriend, who is a cradle Catholic, and some others who have been Catholic their whole lives have said they learn something new each time they go. Whenever my children get older, I would love to take the class over again. There is so much information, so many interesting stories.