Two men to be ordained to transitional diaconate

On the Friday of Easter Week, April 9, Bishop Thomas John Paprocki will ordain two seminarians to the transitional diaconate for the Diocese of Springfield in Illinois. The ordination will take place at 6 p.m. Mass at the Cathedral of the Immaculate Conception. 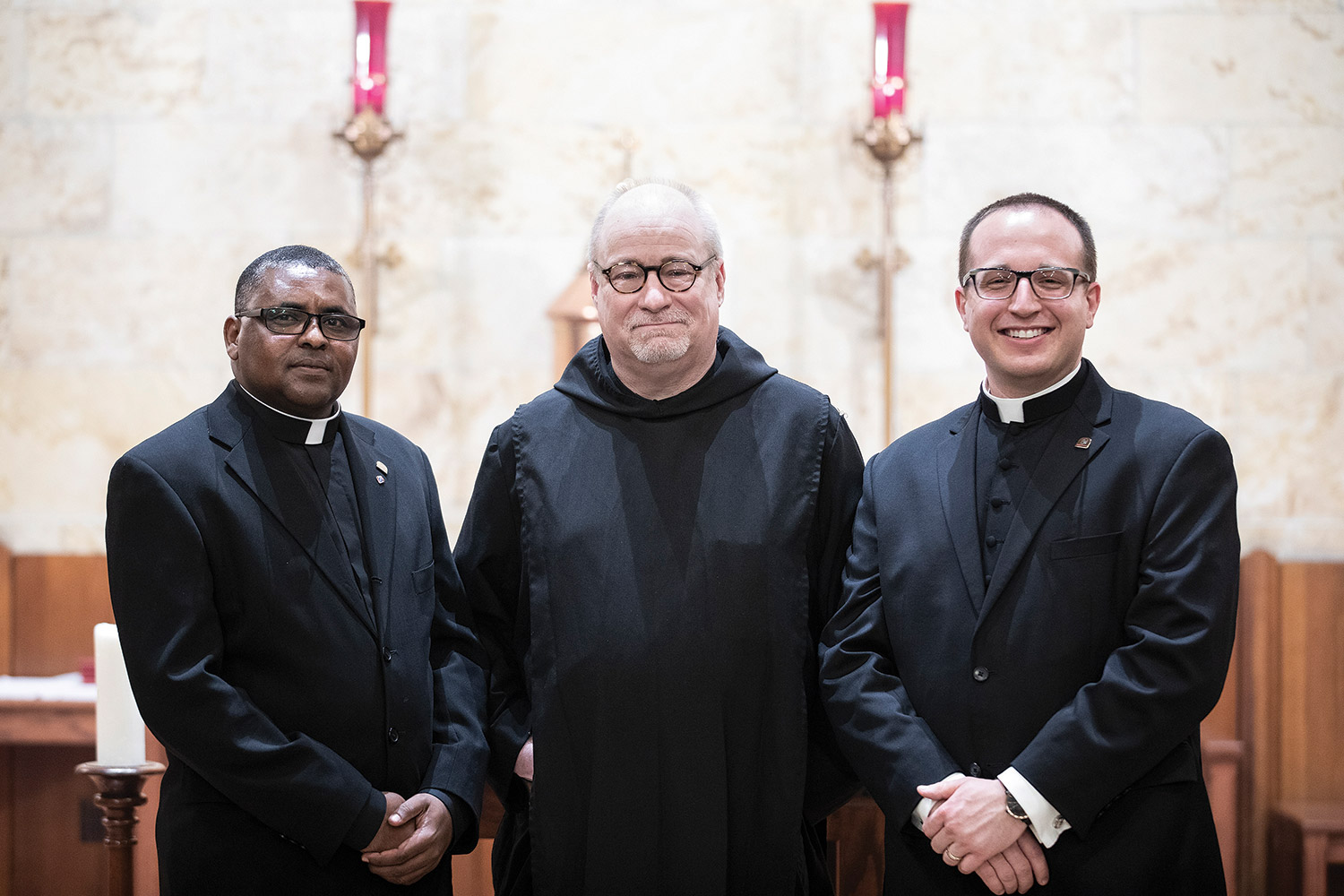 A few weeks before ordination Zach Samples and Paul Lesupati, both seminarians at St. Meinrad Seminary and School of Theology, took time to share some thoughts on their ordination.

A Kenyan by nationality who now calls Blessed Sacrament, Springfield his home parish, Paul Lesupati was serving as a social worker with Jesuit Refugee Services, just before he came to America as a seminarian for the Springfield diocese. Although his vocation journey began when he was a school-aged altar server, it was ultimately when he met Blessed Sacrament pastor Father Jeff Grant that he entered the seminary. The meeting took place more than four years ago at a refugee camp where Lesupati was working and where Father Grant was serving as a chaplain on a service sabbatical.

“My heart had desired to become a priest, but I never knew where God was calling me to go and serve,” he explains. “Multiple priests strongly influenced me in my prayer life. The final push came from Father Jeff Grant, whom I met at Kakuma Refuge. His life of prayer, compassion and his zeal for the pastoral care of the soul influenced me to be more prayerful and to discern joining the Diocese of Springfield in Illinois.” He also counts diocesan priests Father Dean Probst and Father Brian Alford as mentors.

As a social worker, Lesupati worked with refugees and those displaced from their countries because of war. “I was responsible for doing supervision, assessing different cases, and working with different agencies,” he said. “I focused on refugees who needed someone to listen and understand their issues. The mission of Jesuit Refugee Services is ‘to serve, to accompany, and to advocate.’

Lesupati was born on June 21, 1978 and grew up at St. George Catholic Church in the Laisamis, Marsabit Diocese in Kenya. His parents are Jacob Karare Lesupati and Cecilia Ngees Lesupati. Paul was given the second name of Lkuchungan because that name means shepherd. “I was born while my mother was herding/tending cows and goats,” he said. “We are pastoralists.” Much can be learned about life while working alongside parents who take care of goats and sheep, he said, especially “those who are sick, lame and also the stubborn ones.”

In describing his family, Lesupati says he and his many siblings were brought up well, learning the Catholic faith, attending school, and completing chores. “God blessed my parents with nine children, but God called three of my brothers to himself, so we are remaining now six in total, four girls and two boys,” he said. “Among the six children I am the last born.

“My parents loved each other and showed great love by caring for us as we were growing up; they provided us with basic needs, shelter, clothes and food, good health, and education. I am also grateful for the growth of spiritual nourishment, as they were the first to introduce me to the Catholic faith. I learned many lessons from my parents, as they were caring and kind,” he said, adding that they led by example, teaching their children to be respectful, polite, responsible and humble. He is also especially close to his older sister, Margaret, who helped care for him as he grew up and now supports him in prayer, along with his mother.

Prayer is essential in supporting seminarians, Lesupati concludes. “I want to thank all people of God who have been praying for us,” he said. “Let us continue to pray for more vocations to the priesthood and religious life.”

Mt. Zion native Zach Samples says it was during adoration that he had an experience that ultimately led him to his vocation. “The Lord was calling me to the Catholic priesthood. It was Holy Week 2014 that I finally realized this,” he said. “I had gone to adoration at the altar of repose on Holy Thursday night. Walking in, I thought that I had it all together. I was about to graduate with honors, had been accepted to graduate school at EIU, had been hired to work in the Office of Admissions, had signed a lease, and was in a serious and wonderful relationship.

“Walking out of adoration, I had a profound sense of uneasiness, fear and anxiety — like I really didn’t have it all together,” he said. Over the next few months, he sought the guidance of priests, broke up with his girlfriend, and spoke with his family and friends about his vocation. Then, over the next few years, he completed graduate school before becoming a seminarian.

Samples is the son of David and the late Lori Samples. He has one sister, Meghan Roberts, one brother-in-law Tyler Roberts, and one surviving grandmother, Lois DiMarzio. Growing up he and his family were parishioners at Our Lady of Lourdes in Decatur, where Lori Samples was a long-time elementary school teacher. In 2019 the family transferred its membership to Our Lady of the Holy Spirit Church in Mt. Zion.

Samples graduated from Mt. Zion High School and earned both his bachelor’s degree in history and then a master’s degree in college student affairs from Eastern Illinois University in Charleston. While he was in graduate school at EIU, he worked in the Office for Admissions where he worked as a recruiter for the university and managed the campus tour guide program.

Being involved in his faith was nothing new to Samples, who served Mass as a youngster and was a PSR teacher while in high school. “The entire time I lived in Charleston I was very active at the Newman Catholic Center and participated in parish life at St. Charles Borromeo Catholic Church,” he said. “I wanted to grow in my relationship with Christ. The Newman Center allowed a space for that to happen. Right away, I got involved in small group Bible studies, mission trips, discernment groups, the Knights of Columbus, leadership, theology classes, and quite a bit more. It was these opportunities for faith development, as well as the presence of our chaplain, Father John Titus, that really led me to dive deeper into what it was that the Lord was calling me to.”

As he approaches his ordination, Samples feels ready. “At this point, I have been discerning priesthood in one way, shape, or form, and at various levels of seriousness since fourth grade,” he said. “While in a sense, no one can ever be completely ready to lay on the floor of the Cathedral, the Lord continues to affirm that he is calling me to be his priest. There is a certain level of assurance and confidence that comes with that affirmation, while still knowing that I am ultimately unworthy to enter into this sacrament.

“So, I approach ordination with full knowledge that I am still very much in need of formation, have much more to learn, and that I am a sinner in need of mercy, forgiveness, patience, and love,” he said. “At the same time, I approach ordination with faith in the Lord’s call, confidence in the formation that I have received, joy in the reality of the sacrament, profound love for Christ and for his people, and a readiness to serve.”

Samples says he first and foremost, gives thanks to Jesus Christ for calling him to serve him and to be his priest in service to his Catholic Church and his people. He is grateful for his family and friends for love, prayers, and support; to Bishop Thomas John Paprocki for having confidence in him; for the mentorship of Father Brian Alford and other priests; and “in a special way,” he is “grateful to my late mother for inspiring me in the faith and for loving and supporting me every step of the way.”