Two Hospital Sisters of St. Francis, who currently live in Springfield, celebrated their 100-year-old birthdays in April. Join us in thanking them for their long lives of service to God and his people. 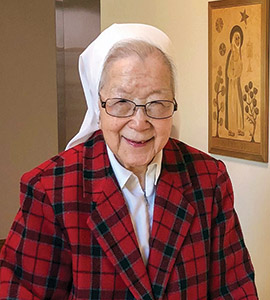 At the time of her entrance to the Hospital Sisters of St. Francis’ community at St. Joseph’s Hospital, Jinan, China, on Sept. 8, 1944, World War II was under way and the sisters were caring for the injured soldiers. While she did not have health care experience or education, the sisters asked her to distribute medication to the soldiers. She was invested in the community on Oct. 17, 1945 and took the name Sister Pacis (Peace).

She professed first vows on Sept. 24, 1947. Due to political instability in China, it was necessary for Sister Pacis and the Chinese sisters to come to the United States for their safety and so they sailed from Shanghai on the SS General Meigs on May 12, 1948 to San Francisco. After traveling on the train, they arrived at the motherhouse in Springfield, on June 5. Their religious formation continued since the plan was to stay three years and return home. However, since the conditions did not improve, they did not return and had very limited contact with their families for nearly 30 years. Initially, Sister Pacis studied English and cared for the sisters at the motherhouse. Later, she studied at St. John’s Hospital School of Nursing, Springfield, and graduated in 1963. For five years, she served as a registered nurse at St. John’s Hospital, Springfield, and St. Vincent Hospital, Green Bay, Wis.

In 1968, the political situation improved in Taiwan and the Hospital Sisters opened Star of the Sea Clinic in Kaohsiung. Sister Pacis and three other Chinese Sisters accepted the opportunity to serve the poor of this Chi Chin district. For the next 34 years, Sister Pacis ministered to the people of Kaohsiung and she returned to Springfield in 2002. 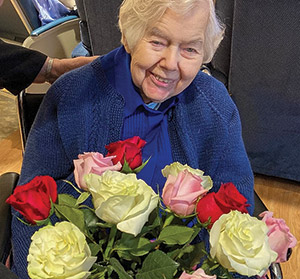 Sister Leola Brown, OSF, celebrated her 100th birthday on April 28, also at St. Francis Convent, Springfield. She was born on April 28, 1921 in Harvel Township, the daughter of John and Hannah (Coen) Brown — and the family were parishioners of St. Raymond Church, Raymond.

At age 14, she left her family of nine to enroll in St. Francis Convent High School in Springfield. After two years of being inspired by the sisters’ example, she entered religious life with the Hospital Sisters of St. Francis in 1937 and one year later was given the name Sister Leola (a name she submitted in honor of her sister, Lela).

She professed first vows on June 13, 1940. From 1941 to 1968, she served in housekeeping at the sisters’ hospitals in Springfield, Belleville, and Decatur and in Green Bay and Eau Claire, Wis. Her assignment to St. Francis Hospital, Litchfield, in 1968 would last for 29 years and brought her a new profession: pastoral care.