On Wednesday, May 5 priests from around the Diocese of Springfield in Illinois will gather at Villa Maria Catholic Life Center on Lake Springfield for a day of celebration. That day they will hear from presenter Bishop Ronald Hicks of Joliet, participate in Evening Prayer, a dinner and then, along with Bishop Thomas John Paprocki, will honor two priests who are celebrating a special Jubilee this year. Being recognized this year are Father James Neuman, who will be celebrating 50 years as a priest, and Father Christopher Comerford, who will be celebrating his 25-year Jubilee. 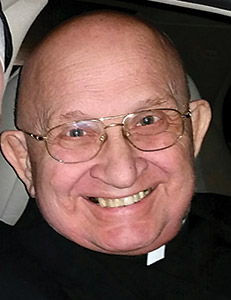 HILLSBORO — In just a few weeks Father Jim Neuman will celebrate 50 years as a priest for the Diocese of Springfield in Illinois. He was ordained May 29, 1971 at the Cathedral of the Immaculate Conception by Bishop William A. O’Connor. A Quincy native, he and his siblings grew up at St. Mary Parish, which is now Blessed Sacrament Parish.

Father Neuman says he credits his eight years of Catholic education for initially helping him grow in the knowledge of his faith. It was during his senior year of high school that he first knew he wanted to be a priest. “Father Terence Tracey and Father Roger Simpson encouraged me to check into the seminary and I have great appreciation for Msgr. William Croke at my first assignment and the encouragement I received from him,” he said.

In his decades of service, Father Neuman served in many capacities. He was an assistant at Immaculate Conception in Mattoon and Sacred Heart in Granite City and later was a parochial vicar at Christ the King in Springfield. He then served as pastor of St. Joseph and as parochial administrator/pastor of St. Mary, both in Carlinville. He was pastor of St. Bernard in Wood River for 11 years, and finally spent 16 years as pastor at Holy Family in Litchfield and St. Agnes in Hillsboro. For the last seven years before he retired in 2017, Father Neuman was also dean of the Litchfield Deanery. He is now pastor emeritus at Holy Family and St. Agnes.

“I have wonderful memories of my assignments,” he said. “I would like to thank all the parishioners for their support and encouragement through the years.”

In addition, he served as a member of the Priests’ Senate, the Priests’ Personnel Board, and the Diocesan Finance Council and was a judge in the diocesan Tribunal. He was an instructor at Marquette Catholic High School in Alton and at Sacred Heart Academy in Springfield. He was also chaplain at Blackburn College in Carlinville for six years. “One of my favorite aspects of my priesthood was working in the Tribunal,” he said. “I enjoyed helping and assisting people through the healing process of annulment.”

Since Father Neuman retired, he has been living in his own home in Hillsboro, where he enjoys fishing and assisting by celebrating Masses where he is needed. In the past years, has filled in for priests in the area, he said. He has one surviving sister, Joyce Kroner of Quincy. Finally, he holds a special place in his heart for Angie Mizera and her family, and Mary Savage and her family. “They have been family to me,” he said. 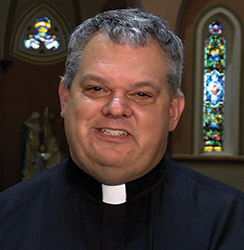 DECATUR — Father Chris Comerford, who grew up in Decatur, is marking 25 years as a priest back in his hometown — not at his former home parish, Our Lady of Lourdes, but close by at Ss. James and Patrick Parish. He is also chaplain for the Decatur Correctional Center. He was ordained on May 25, 1996 at the Cathedral of the Immaculate Conception by Bishop Daniel L. Ryan.

Father Comerford credits his desire to become a priest to hearing what his theology professor at The College of St. Francis in Joliet had to

say. “Dr. Scott Hahn was so excited about his Catholic faith and made the Scriptures come alive for me,” he said. “His influence encouraged me to want to share my faith and helped me be open to hear God calling me to the priesthood. People have said I preach pretty well and a large part of that is due to Scott teaching me to love God’s word in the Scriptures.”

Over the years, Father Comerford has served in a number of parishes, including as parochial vicar at Blessed Sacrament in Springfield, Our Saviour in Jacksonville, and Ss. Peter and Paul in Collinsville; as sacramental priest at St. Luke in Virginia; and as priest moderator of St. Mary and St. Mark in Madison. He has been pastor at St. Louis in Nokomis, St. Barbara in Witt, St. Maurice in Morrisonville, St. Elizabeth in Granite City, and Blessed Sacrament in Quincy.

From 2000 to 2003, Father Comerford was associate director of Vocations for the Springfield diocese. As a priest and because he was instrumental in helping with vocations, Father Comerford feels strongly about having men enter the priesthood. “Several years ago, as a ‘young’ priest, I was worried that there wouldn’t be very many priests coming after me,” he said. “I am thrilled to see the increase of seminarians and new priests in our diocese. It gives me hope for the future. The best way to increase vocations is by families truly living their faith. If the Catholic faith isn’t that important in the home, why would a young man consider becoming a priest?”

In addition to all the work he has done for the diocese, Father Comerford has been a Catholic chaplain for the St. Louis Cardinals, which is something “that is beyond what I have dreamed possible,” he said. “We are not starting Masses yet (at the stadium) until a new phase is reached, which will allow more access to the team and personnel. It is getting more challenging for me to be involved very much with this new assignment (in Decatur), but I have other priests who will be there if I can’t.”

No matter where he is Father Comerford “loves celebrating Mass.” “I have also felt called to really bring the mercy of God to people in the sacrament of reconciliation,” he said. “People are so afraid to go to confession, so I feel called to make it comfortable for them.”

Father Comerford says his Decatur assignments have been a “real blessing.” “I have been able to see my parents several times a week even during the pandemic,” he said. “I have been able to reconnect with several friends and family members. It also is nice to have connections with my parishioners about the history of the parish and the community. Although it is difficult to get to know people during this crazy time being somewhere familiar has helped.”

Father Comerford is the son of Jim and Mary Comerford. He has two brothers: David is married to Janel and they have one daughter, Caden; and Patrick is married to Angie and are expecting their first child, Finnegan Joseph in May.

Looking back at 25 years as a priest, Father Comerford said, “It is a great life. Not easy, but nothing important ever is. There is not one day in my life as a priest that I wished I had chosen another path. I have been so blessed to serve as a priest in the Diocese of Springfield in Illinois these 25 years. I am thankful for all the parishioners and friends who have supported me. I ask that everyone pray for me and all our priests.”