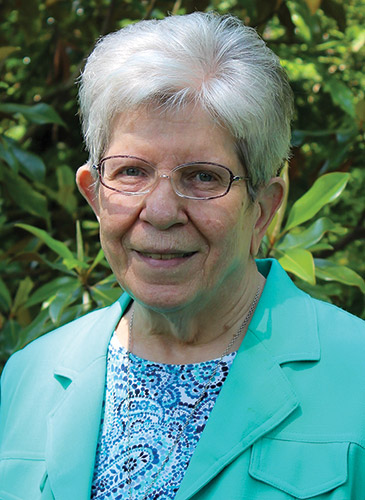 She was born Dec. 11, 1938, in Bloomington to William Vernon and Mildred Knecht Neeves and grew up in Pana. A later move to Decatur brought her into contact with the Ursuline Sisters, and she entered the Ursuline community in 1956, professing her vows in 1959. She earned a bachelor’s degree from the College of New Rochelle in New York and a master’s degree from Providence College in Rhode Island.

Sister Mary Ellen was a teacher, principal, spiritual director, and Ursuline leader. She was principal of St. Ambrose School in Alton from 1968 to 1971, leader of the Ursuline community in Decatur from 1976 to 1978, and principal of St. Aloysius School in Springfield from 1985 to 1988. She also ministered in Kirkwood, Clayton, De Soto, and Cape Girardeau, Mo., and New Orleans.

Through her varied ministries, Sister Mary Ellen always sought to be of service in the best way she could. She especially loved working with little children, helping them with their reading skills. In later years, she enjoyed tutoring at a local elementary school in Cape Girardeau and then at Most Holy Trinity School in St. Louis. She volunteered many places, including most recently at TEAM (The Emergency Assistance Ministry), a food pantry in Florissant, Mo. As an intake counselor, she was one of the first contacts with people needing food assistance, and her compassion and kindness were greatly appreciated.

Sister Mary Ellen was preceded in death by her parents and a brother, Nick Neeves. She is survived by her sister, Shirley (Larry) Warren, and brother Phil Neeves.

A memorial Mass was celebrated May 15, at the Ursuline Academy Chapel in Kirkwood. Burial was at St. Peter Cemetery. Memorial gifts may be made to the Ursuline Sisters Retirement Fund, 353 S. Sappington Road, St. Louis, MO 63122.